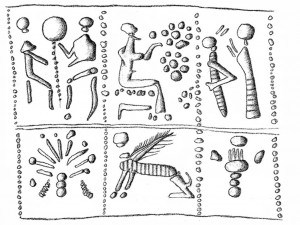 Excavations at Hala  Sultan Tekke
(preliminary report)
The twelfth century settlement of the important Late Cypriote harbour city of Hala Sultan Tekke has been explored since the 1970s. The main objective of the resumed excavations at Hala Sultan Tekke at this time is the investigation and determination of the complete occupational sequence of pre-12th century levels. The choice of the precise spot for excavation within the recently extended Area 6 has been guided by a ground-penetrating radar survey (GPR) which was successfully carried out in 2010 during the first season of this project (see http://www.fischerarchaeology.se/?page_id=534). This survey led to the discovery of a large Late Cypriote complex, which was further exposed from 26 April to 27 May 2011. Additional high-precision GPS-measurements were carried out in order to correct plans from the old excavations.
The Söderberg Foundations, Sweden, kindly supported by Dr. Tomas Söderberg sponsored the project. The excavations were directed by Professor Peter M. Fischer from Gothenburg University, Sweden. Eductional and scientific cooperation was continued with the University of Vienna, Austria. The basic team consisted of 18 archaeologists and students, most of them from Sweden, others from Austria, Denmark, Jordan, Norway and Switzerland. Amongst the team members are R. Feldbacher, MA, and T. Bürge, who both acted as assistant field directors, T. Bürge also as assisting draughtsperson. Others were H. Ta’ani, technical archaeologist, M. Bataineh, architect, surveyor and draughtsperson, and P. Georgiou, responsible for the logistics. Students include D. Blattner, W. Försth, L. Franz, A. Gustafsson, H. Indgjerd, F. Kärfve, S. Lyttkens, N. Monschein, M. Persson, N. Werther and F. Åfeldt. A. Fischer, M. Werngren and I. Fischer participated part-time.

During the second year of excavations at the site the expedition exposed a third phase of occupation in addition to the two phases hitherto exposed. Thirteen walled spaces which belong to Stratum 1, the most recent phase of occupation, were uncovered (“Stratum” should be considered only as a term of convenience for use during the fieldwork and in the preliminary reports. It is used to designate a level of occupation regardless of the area of excavation and numbered from below colluvial soil as it is excavated. In the final report the designation “Phase” will be used with “Phase 1” as the most ancient). A few partially exposed spaces are from Stratum 2 which demonstrates a differing architectural layout. A few walls of the hitherto oldest exposed occupational phase, Stratum 3, could be uncovered only at a few spots. A Stratum 2 compound with extraordinarily wide walls was partly cleared in the eastern part of the excavations. It was reused in Stratum 1 and may represent an official building which was used during the period represented by Stratum 1 and 2. The architecture of all strata is shown in the air photograph; Stratum 1 and two of the five drawn sections below. 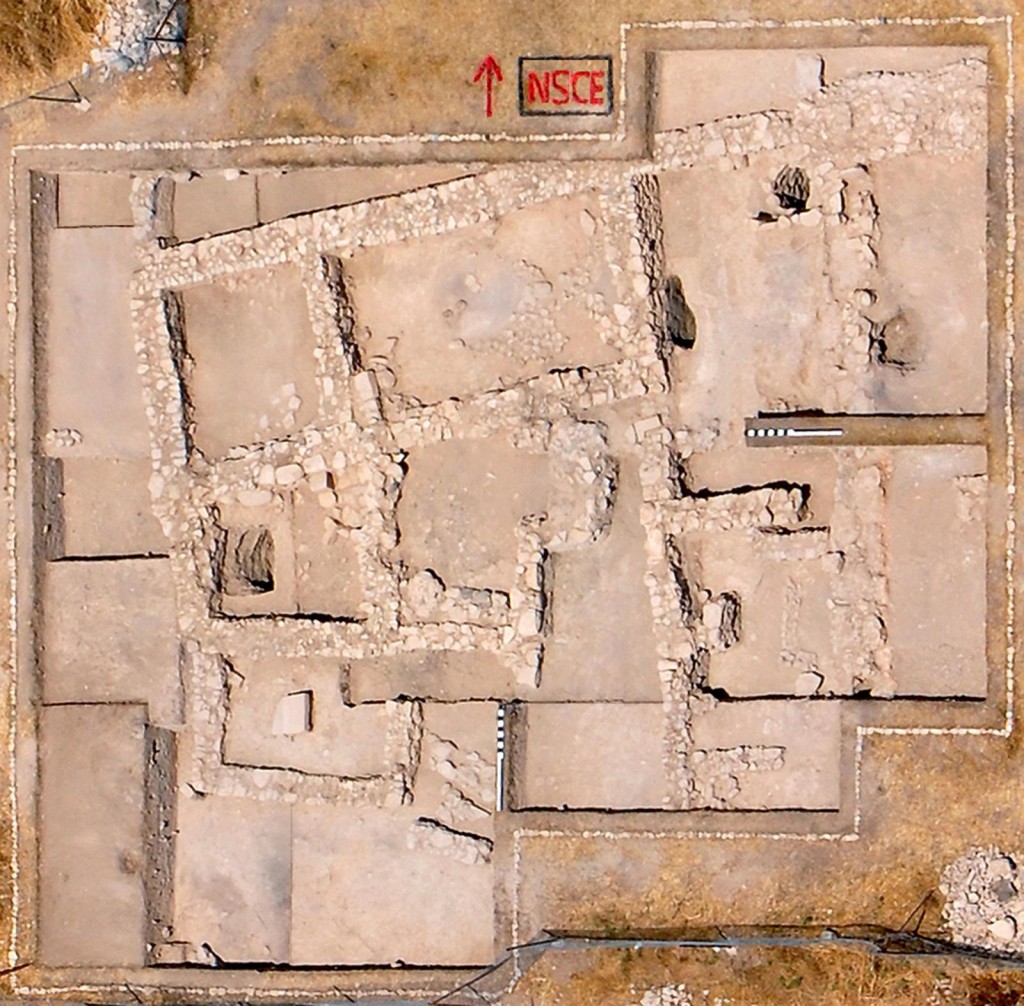 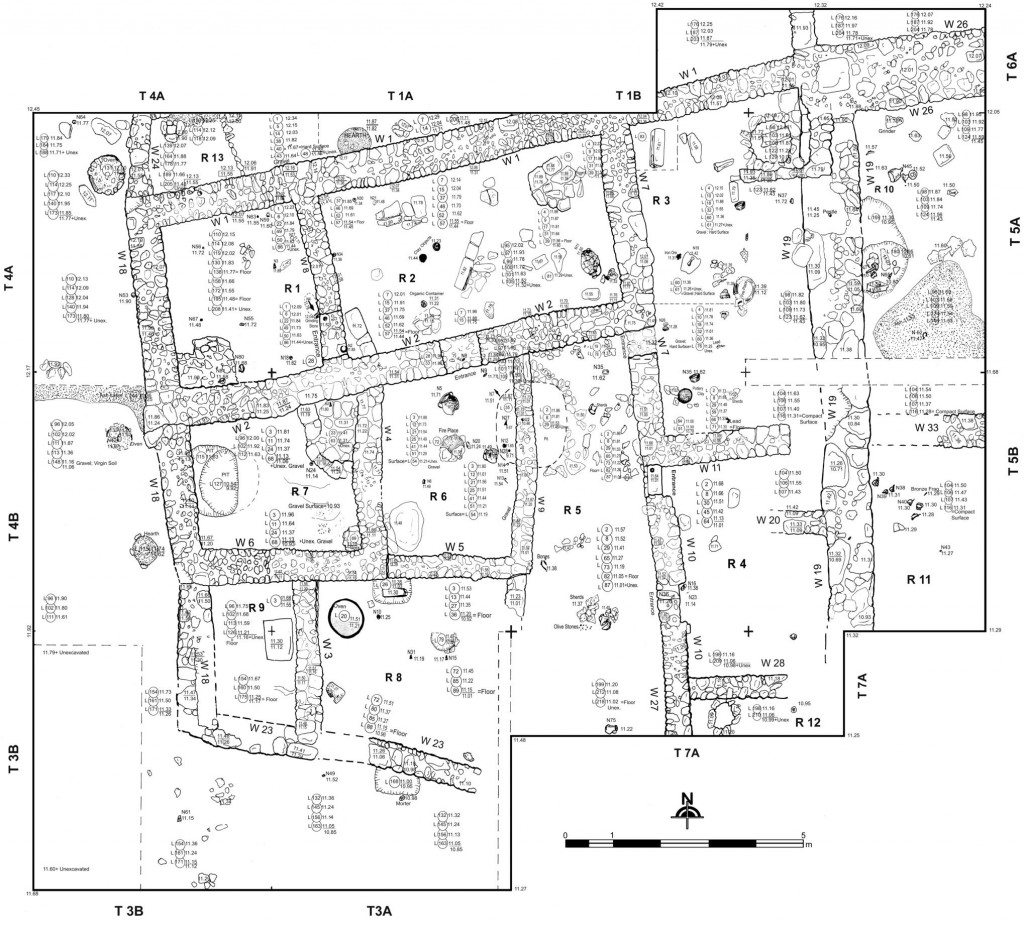 Architecture, features and finds of Stratum 1, the most recent phase of occupation (drawing M. Bataineh).

Amongst the small finds are a cylinder seal of haematite with six incised panels and a pendant figurine of stone. The cylinder seal which most likely was recarved has no exact counterparts anywhere. The stone figurine (pataikos) is unique for Cyprus (pers. communication V. Karageorghis) and any good parallels could not be found (so far).

Cylinder seal of haematite (observe the red colour in depressions). 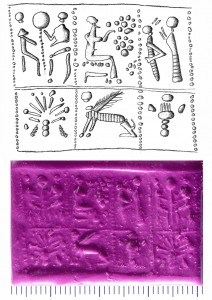 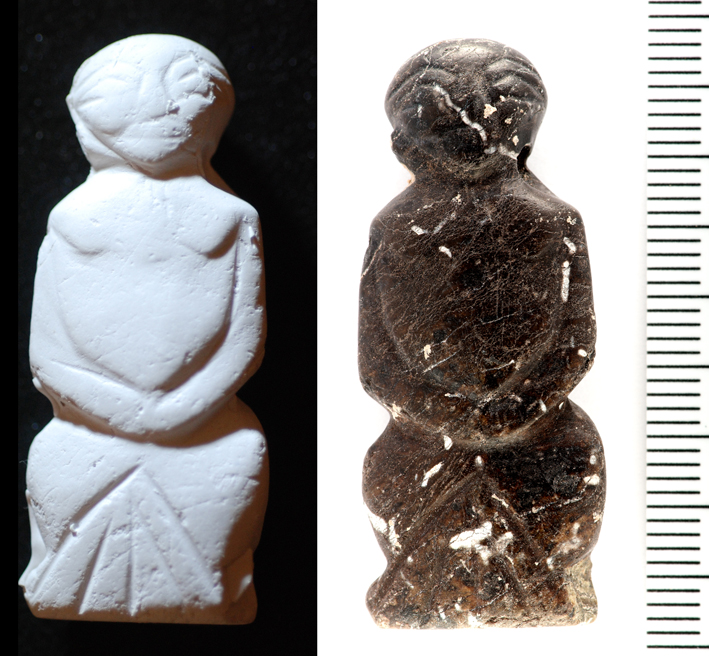 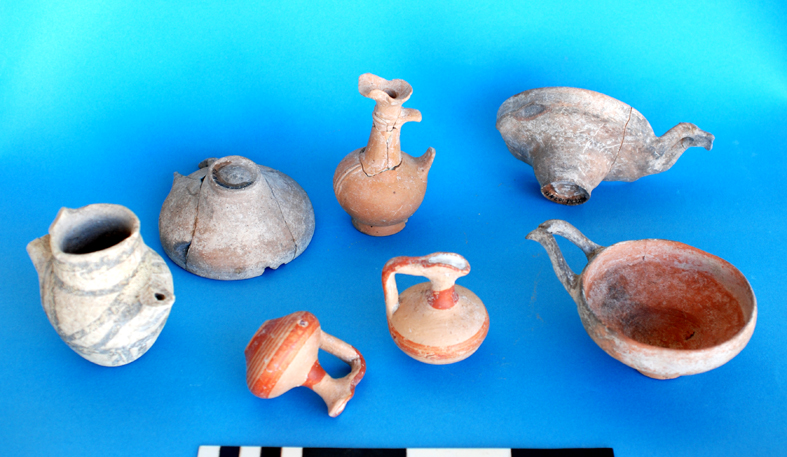 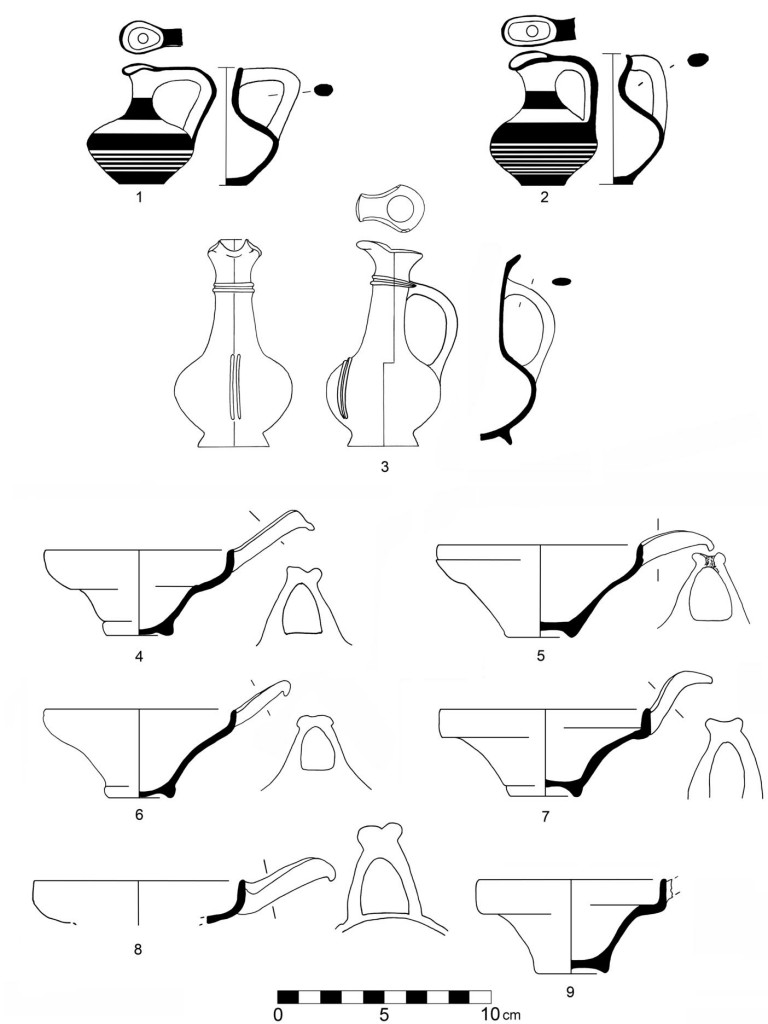 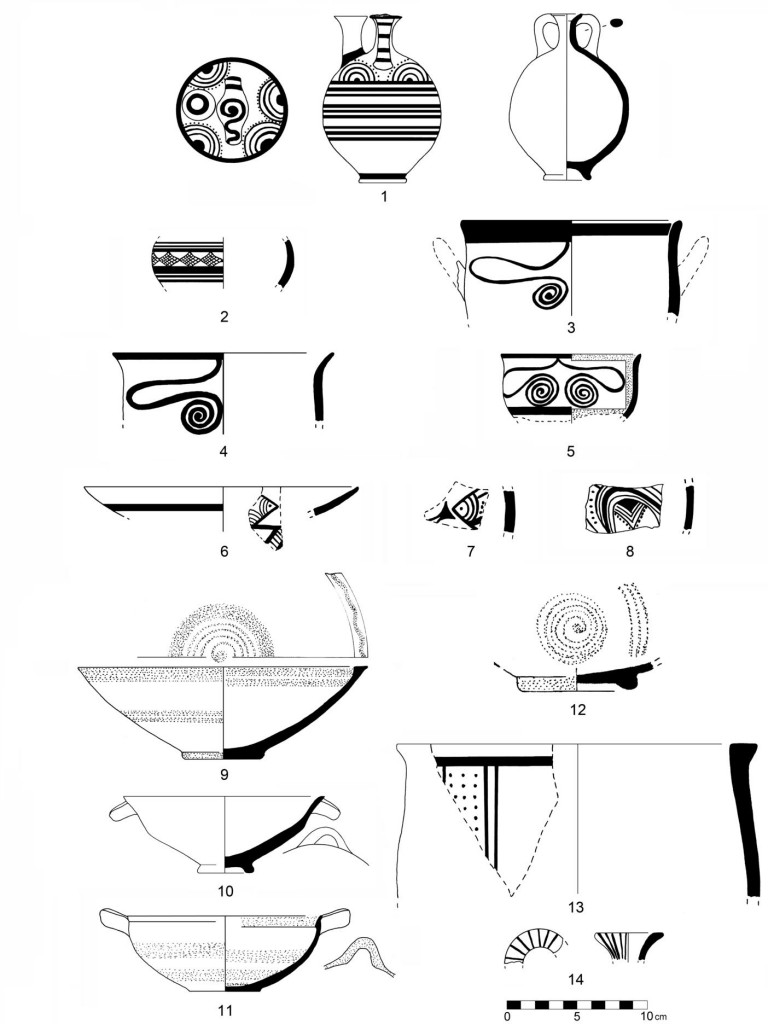 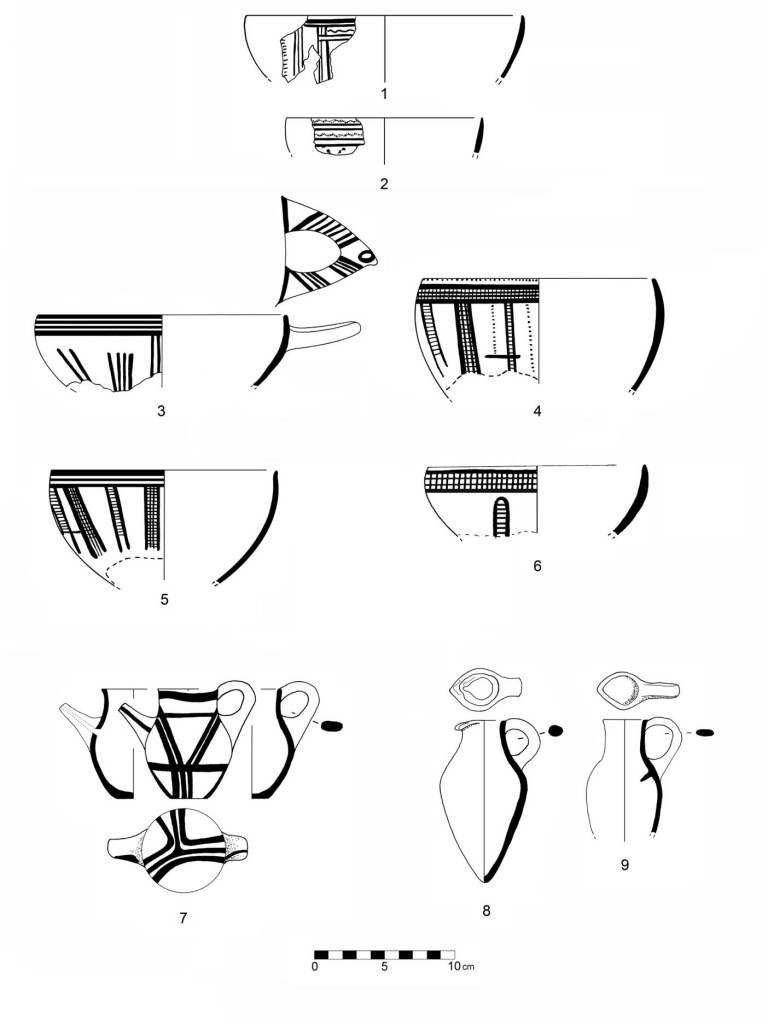 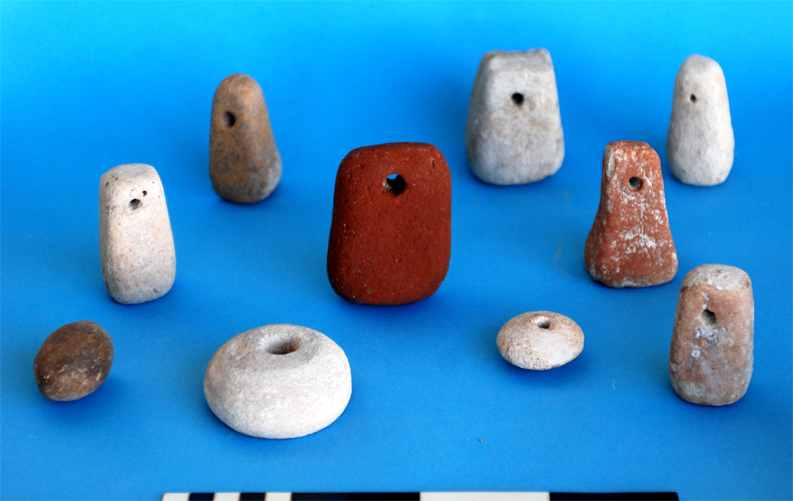 Preliminary conclusions The main objective of the resumed excavations at Hala Sultan Tekke in Area 6, which are guided by the ground-penetrating radar survey (GPR) from 2010, was the investigation and determination of the complete occupational sequence. The large Late Cypriote complex which was discovered and partly exposed in 2010 was further excavated in 2011. Thirteen walled spaces which belong to Stratum 1, the most recent phase of occupation are now uncovered. They represent working and living spaces. A few partially exposed spaces which obviously had the same functions are from Stratum 2. From the latter is a compound with extraordinarily wide walls which was exposed in the eastern part of the excavations. It was reused in Stratum 1 and may represent an official building from which some complete vessels of Base-ring I and II and Mycenaean-type vessels derive. A third stratum, Stratum 3, could be uncovered only at a few spots. The ceramic repertoire is in accord with that of the later part of the Late Cypriote period. In addition, there are numerous sherds which belong to the first half of the Late Cypriote or even the Middle Cypriote period, however, architectural remains from the latter two have not yet been found. The following ceramic wares which here are not divided according to phases are represented: White Painted Pendant and Cross Line Style, Red-on-Black/Red, Red and Black Slip, Monochrome, Bichrome Wheel-made, Proto White Slip (?), White Slip I (both monochrome and bichrome decorated) and White Slip II (early, mature and late), Base-ring I and II, Red Lustrous Wheel-made, White Painted Wheel-made, Plain White Wheel-made, White Shaved, Coarse and Pithos. Imports amongst which are some intact vessels come from the Mycenaean sphere of culture. A few sherds of Phoenician Bichrome ware (pilgrim flasks) were found just below colluvial soil. The numerous textile-production-related tools point to the manufacture of fabric on a larger scale. There are some extraordinary discoveries amongst the small finds from 2011: one is a cylinder seal of haematite with six incised panels of obvious Cypriote origin, and the other a pendant figurine of black and white marbled stone, a pataikos. 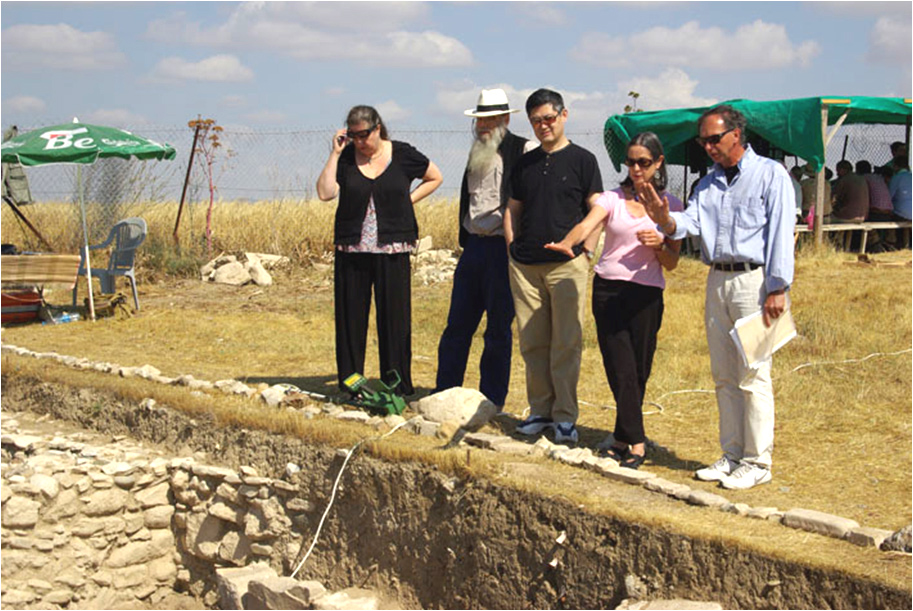