The third season of excavation at Hala Sultan Tekke added knowledge to the project, the main objective of which is the investigation and determination of the complete occupational sequence of the pre-12th century levels. New walled and open spaces from Strata 1 and 2 were exposed in Area 6. Another pictorial krater with birds was excavated. The terminology for the much discussed Cypriote-produced White Painted Wheel-made ware has been revised and a new terminology is suggested, i.e. ‘White Painted Wheel-made Geometric Style (WPGS)’ and ‘White Painted Wheel-made Pictorial Style (WPPS)’, of which the latter includes the Creature Krater from 2010 and the Bird Krater from this season. The hypothesis that a tsunami destroyed parts of the city in the 14th or 13th century BC is discussed. An additional radar survey of some 1.3 ha revealed substantial structures, i.e. new city quarters. 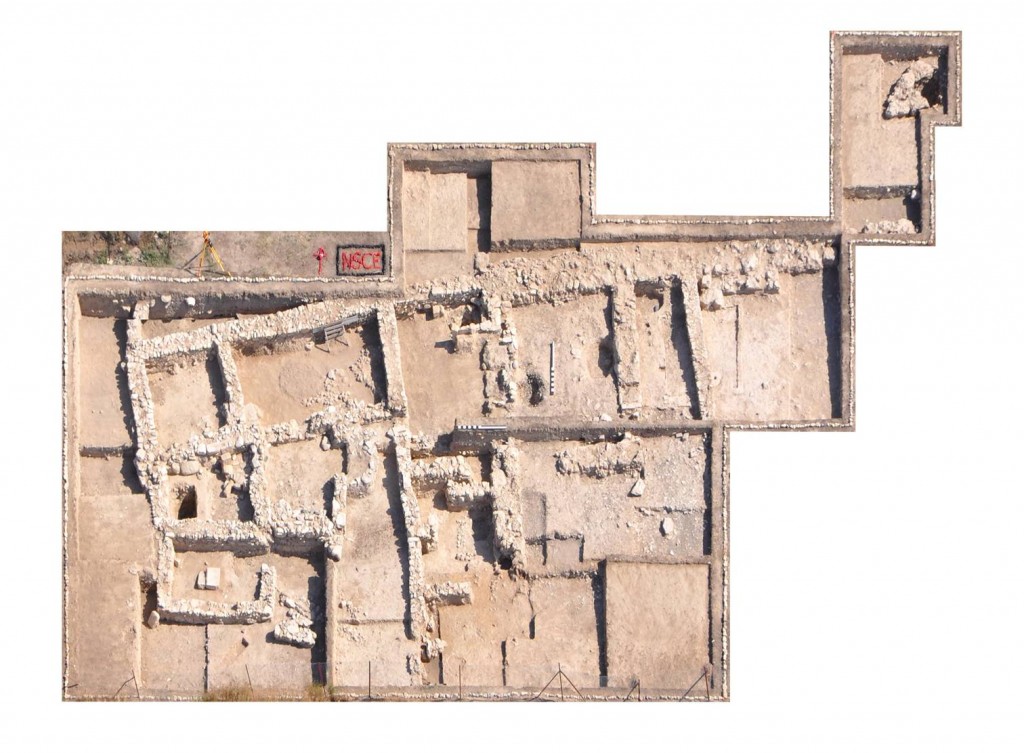 Air photograph taken at the end of season 2012; three strata shown. Observe the missing structures to the south-east (see below “tsunami-theory”)

There is evidence of additional spaces from Stratum 2 close to the southern fence which are only partially excavated and consequently not yet numbered. There are two new rooms from Stratum 1, R19 and R20. The function of the former was that of a working space where food processing and the production of ceramic containers took place, the latter represented an open space with several food processing installations.  The new space from Stratum 2, R21, is interpreted as a large open courtyard with a basin which was covered by a roof of twigs and straw supported by wooden poles. It is our belief that the basin has primarily been used in connection with the dyeing of textiles but was later used for the production of clay sling bullets in connection with the defence of the city, just before the city represented by Stratum 2 was destroyed. R15 from Stratum 2, which revealed extraordinary finds, was further excavated. This space seems to have been used for people to gather, to eat and to drink. According to the imported Mycenaean-type pottery, two intact beaked jugs (FS 149) are dated to Late Helladic IIIA2-B1, which corresponds roughly to Late Cypriote IIA2-LC IIC1.  The Mycenaean vessels provide a terminus post quem, and at present a date in the 13th century for Stratum 2 is suggested.

R18 from Stratum 2 contained a stepped stone leading to a heavy, flat, square stone slab interpreted as a house altar, on which our Creature Krater (WPPS) was initially placed; the room itself was designed for worship. The pit with the havara floor from Trench 1A which, inter alia, contained the Bird Krater (WPPS), a complete juglet of White Shaved ware and a necklace is connected with the nearby clay cones: they may have been used for the production of small, mould-made, ceramic containers. 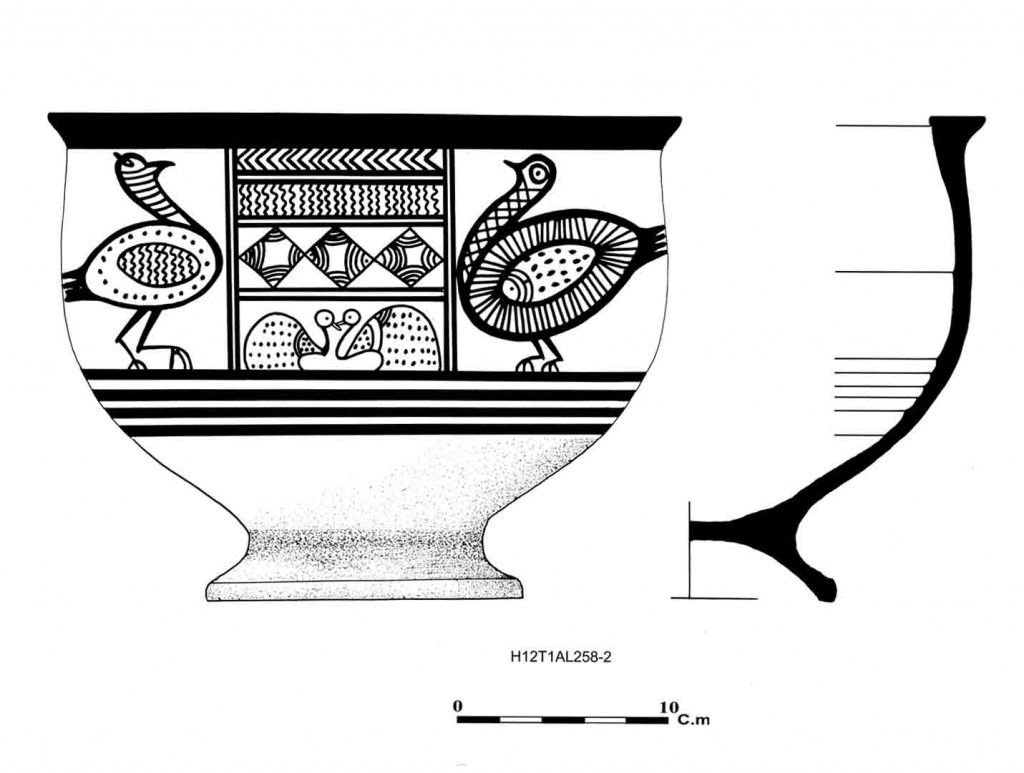 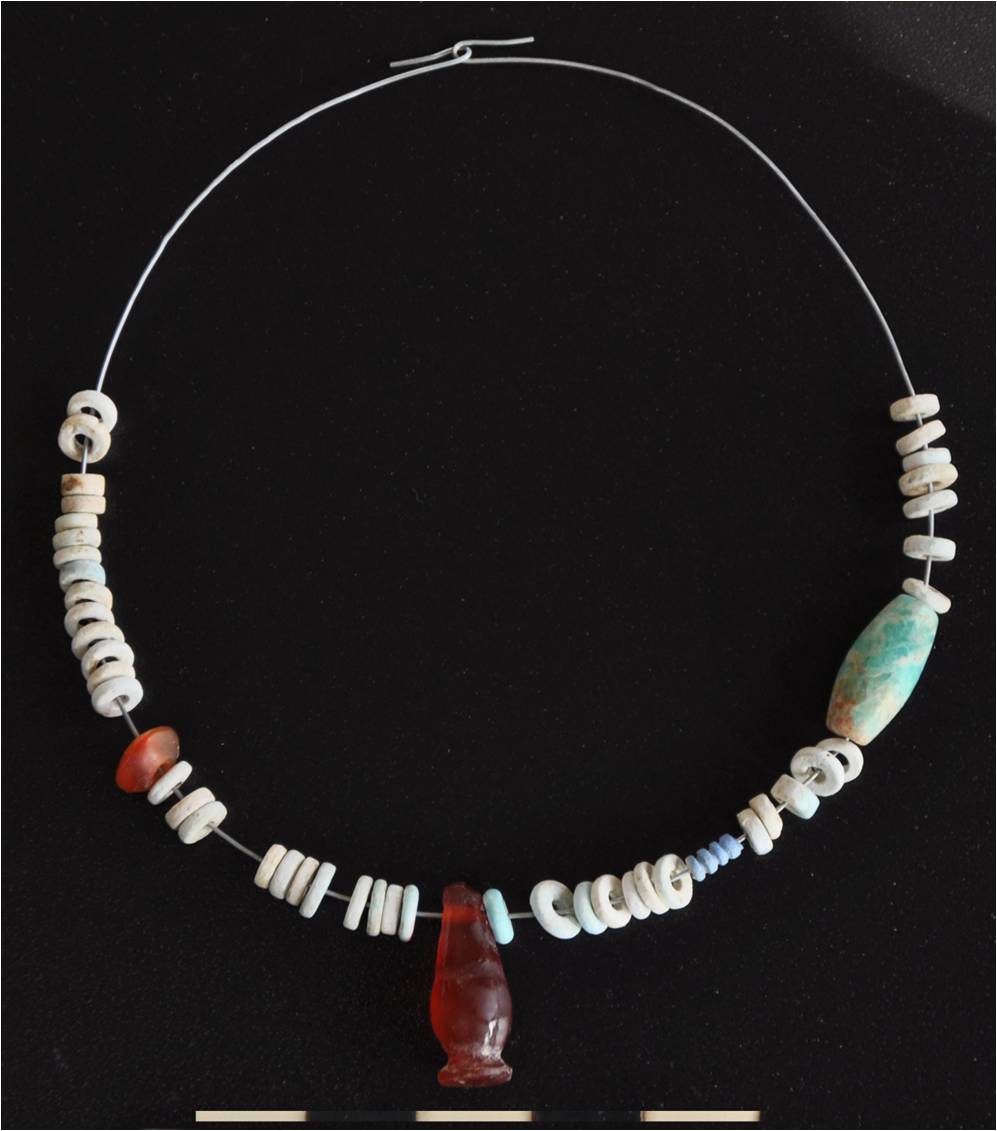 Necklace from pit in Stratum 2 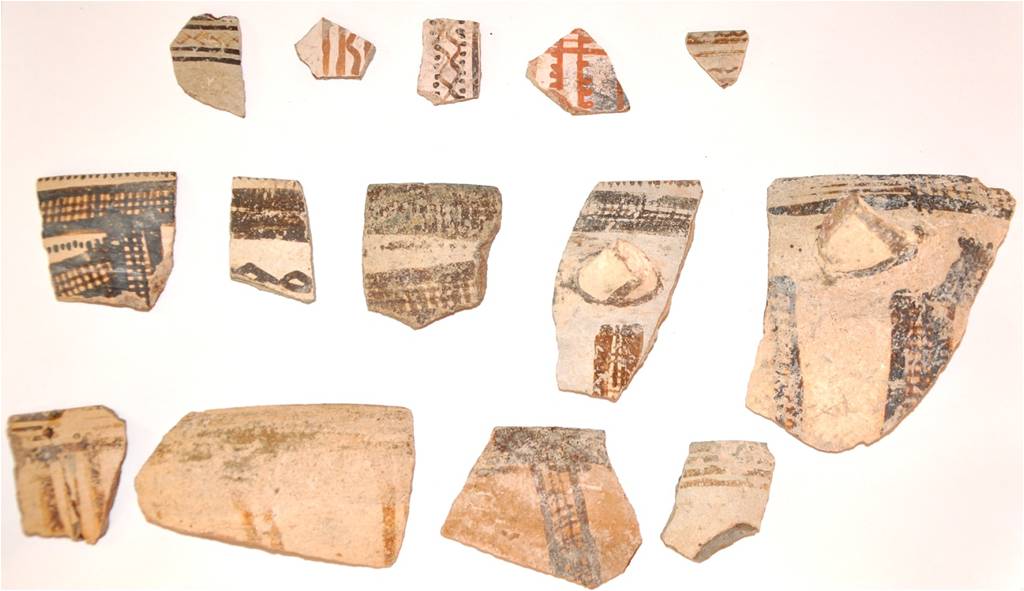 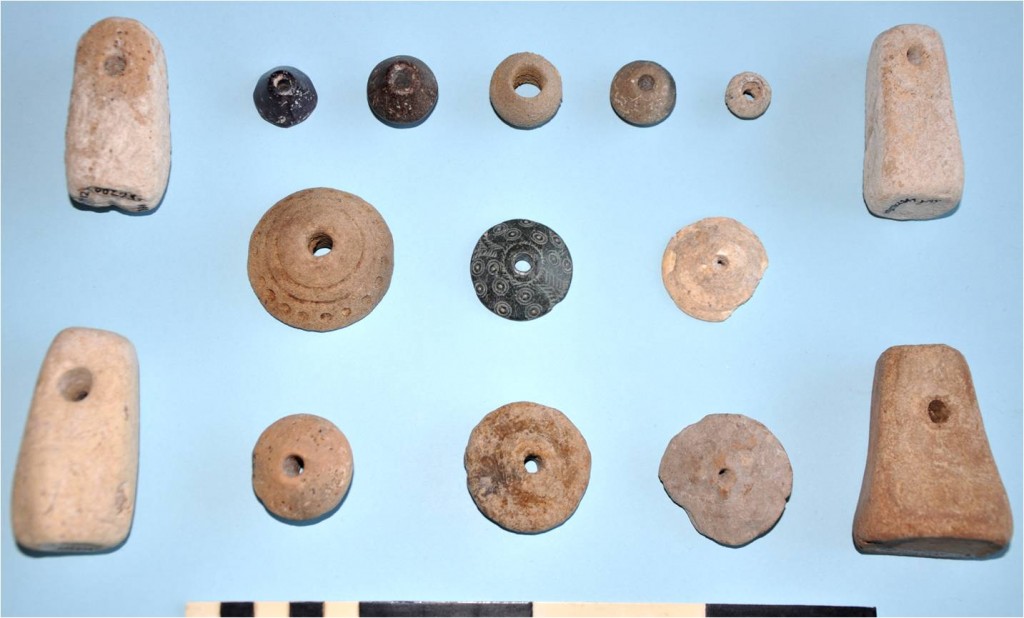 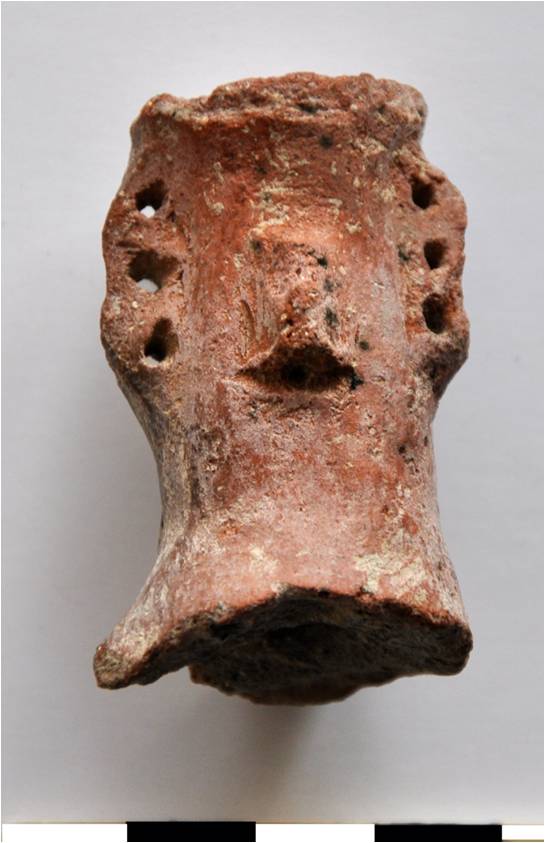 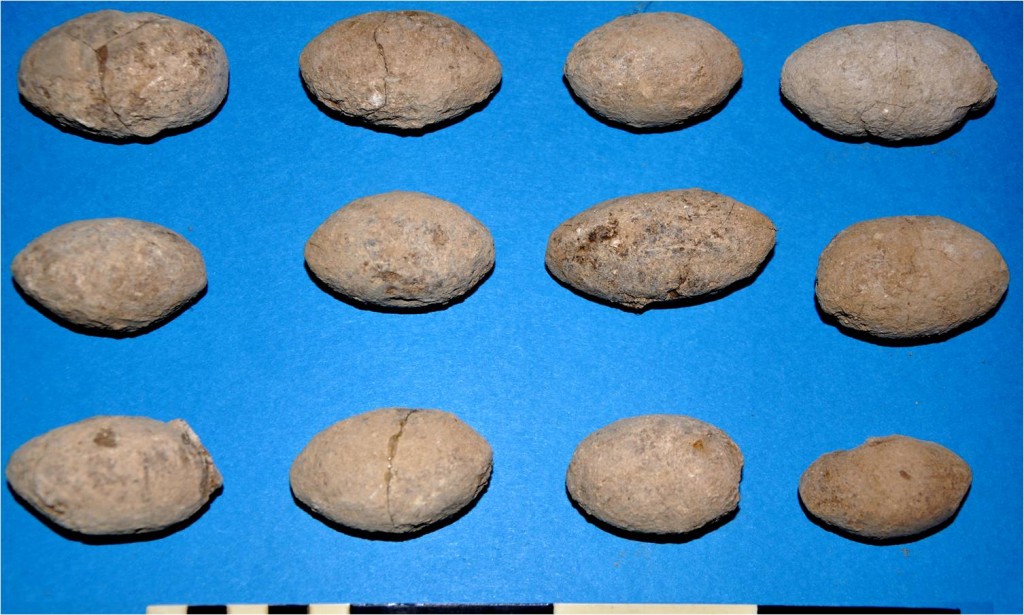 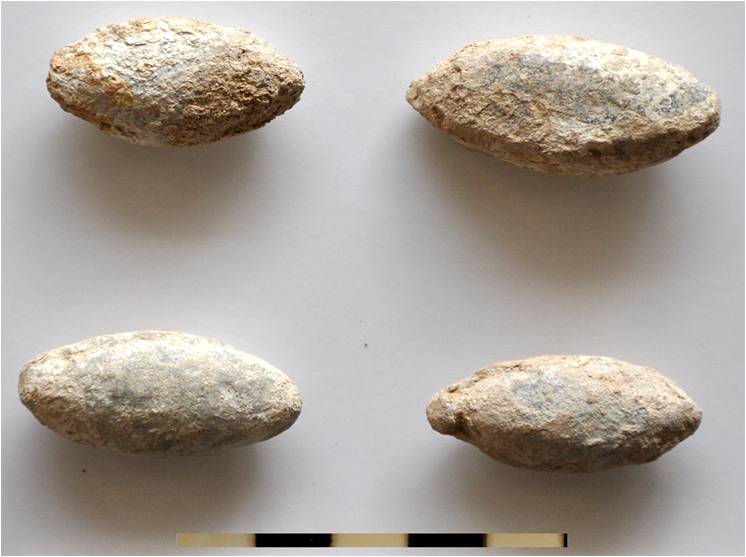 The city destroyed by a tsunami?

The air photograph (see above) may serve to develop an interesting theory: To the left, viz. to the west, Strata I-III and virgin soil can be seen in a nice sequence. To the right (the south-eastern corner of the photograph), viz. towards the sea to the east, the situation is completely different: the top layer, Stratum 1, is here quite shallow. This Stratum contained, inter alia, complete vessels of Base-ring II ware (see above). The next layer, Stratum 2, contained intact vessels of Late Helladic IIIA2-B1 ware which are dated after roughly 1350 BCE. There is an approximately 0.9-1.0 m thick layer of gravel which gives the impression of material which was washed-up by the sea. W19, the top of which is 11.32 m above mean sea level and its foundation 10.54 m, giving it a preserved height of roughly 0.8 m, has been built in Stratum 2 (or earlier). This means that the washed-up layer of gravel against the eastern (seaside) surface of the wall is more recent than the wall itself. This washed-up layer does not contain any human-produced finds which became evident when an approximately 1 m x 1 m test trench was dug east of W19. Consequently the washed-up gravel layer is more recent than W19 but older than the date which the Mycenaean vessels would allow. We forward here the theory that the city of Hala Sultan Tekke was partly destroyed in the 14th or the 13th century BC by a natural catastrophe, a tsunami which was caused by an earthquake in the sea south-east of the shore of Cyprus, and that the washed-up layer of gravel was deposited by the wave.

The loose gravel in the south-eastern part of the opened-up area obviously was not convenient for building new structures. This observation  may serve as an explanation why the people of Stratum 2 after the catastrophe and those of Stratum 1 did not use this part for new building activities.