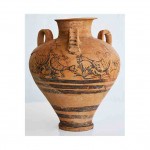 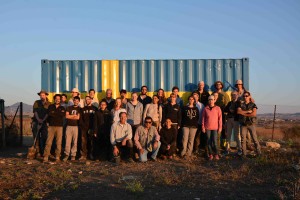 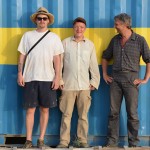 Over a period of five weeks in May and June 2017, excavations of the late Cypriot harbour city of Hala Sultan Tekke were carried out by the New Swedish Cyprus expedition, headed by Professor Peter M. Fischer of the University of Gothenburg.

The team consisted of a total of 32 students and specialists, amongst the latter being some trained in osteology, botany, conservation, Aegean and Near Eastern ceramics, and geophysical prospecting. Estimates of the size of the city vary between 25 and 50 hectares. A geophysical survey covering 20 hectares was carried out in June 2017. The results are provisional but give indications of a city wall and moat surrounding the settlement. At the same time, we gained a better understanding of the extent of the city. 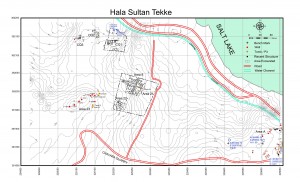 Overview with city quarters and Area A

In 2017, two areas emerged that were of specific interest to the general research objectives of this long-term project: City Quarter 1 (CQ1) and Area A. CQ1 is one of three city quarters discovered and partly exposed by the expedition since 2010. The others, CQ2 and CQ3, lie to the west of CQ1. These three city quarters are in the north-western part of the city and close to the ancient harbour, which is the most westerly part of Larnaca Salt Lake and near to the international airport. The initial excavations were guided by the results of the georadar survey, which indicated stone structures just below surface. Of those visible on the georadar map the deepest were at a depth of approximately 1m, which corresponds to our Strata 1 and 2. These strata (well-defined consecutive layers of occupation), both of which were destroyed, date from the 12th century BCE. Stratum 2 may date from around 1200 BCE (observe, though, the problem of radiocarbon dating this period due to the flat calibration curve from roughly 1225-1130 BCE). In the course of the excavations, however, massive architectural units were discovered below the maximum penetration depth of georadar, i.e. between 1.5 and 2 m below the surface, making them invisible on the georadar map. 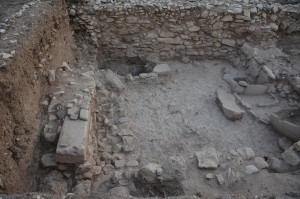 This is our first evidence of substantial remains from Stratum 3 with a preliminary date in the 13th century BCE, and possibly of an even earlier phase of occupation (Stratum 4). Stratum 3 thus offers some of the oldest remains from settlement contexts at the site, along with exceptionally well-preserved and closed contexts belonging to a large building with walls whose dimensions exceed those of the later strata. The Stratum 3 building employs a markedly different building technique with large conglomerate stones preserved up to 1–1.20m. One of the rooms of Stratum 3 contains four vertical storage units built from flat, worked stones, and large pieces of a pithos, once approximately 2m high, decorated with wavy plastic lines. 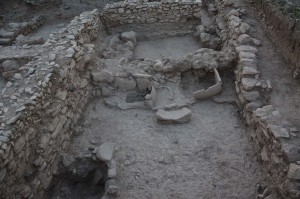 CQ1, Stratum 3. Room with installations. In the background “Furnace Room”.

These installations are likely to have been used for the storage of food such as grain and olives. One large grinding stone (almost 1m wide), placed in the centre of the room together with several smaller grinding stones and two small pounding stones, suggests use in the processing of cereals or vegetables. This is supported by the preliminary archaeobotanical results, which demonstrate barley and other unspecified cereals, as well as olives and grapes. A series of three hard-packed floors was in use in the storage area. At least two other installations were placed on these floors, including a mudbrick-lined fireplace, and a feature with two identical postholes close to each other. Two of the floors are separated by a thin layer of ash which probably came from the fireplace. Other finds from this room are sherds of faience bowls, most likely Egyptian, a spindle whorl, and a Base Ring bull (part of a kernos). 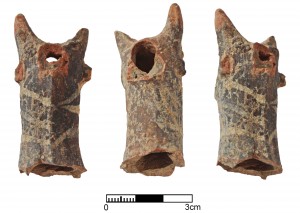 The pottery includes local plain and coarse wares along with White Painted Wheel-made Ware, White Slip I and II, Base-ring I and II, and imported Mycenaean vessels. There is a rare example of a decorated pilgrim flask, most likely imported from the Levant, and a handle with an inscribed Cypro-Minoan character in a script still to be deciphered. Another room is a workshop, where a furnace, a large amount of slag and ore, and a pit, intentionally filled with unfired clay, were found. Two floors were built with the Stratum 3 walls, which were plastered with limey clay. The furnace on top of the upper floor was made of a thick layer of mudbricks. The use of this furnace for copper production is attested by the slag and the copper ore together with fragments of ceramic tools and burnt debris and ash. In addition, another two locally produced ceramic handles inscribed with Cypro-Minoan characters were found in this workshop. Below the two floors, evidence of metal production activities is lacking. The fill below the lowest floor (above Stratum 4) contained an almost complete Base Ring I bowl, together with sherds of White Slip I which can be dated to the 15th and 14th centuries BCE.  The Mycenaean pottery collected from Stratum 3 dates from Late Helladic IIIB, i.e. the 13th century. This is supported in particular by the presence of imported Aegean bowls, both of deep and of shallow shapes so far rarely attested in reliable settlement contexts at Hala Sultan Tekke. It is expected that more rooms will be found, since several walls continue into the sections that have yet to be excavated.

Parallel with the project in the settlement, excavations took place in Area A. This area, excavated since 2013, is roughly 550 m east of CQ1 and close to the mosque of Hala Sultan Tekke. Here the choice of areas of excavation was again guided by geophysical prospecting and in particular by magnetometer measurements, since “superficial” architectural remains – ideal for georadar – are missing. The magnetometer map shows more than 80 “pits”, several of which were exposed during the past five seasons. These turned out to be wells, prosperous offering pits, and tombs with rich contents reflecting a cosmopolitan society with far-reaching contacts. In 2016, the oldest of these features, Tomb X, dates from the 16th century BCE. The rich finds included excellent jewellery and some 70 ceramic vessels, one being among the earliest Mycenaean imports to Cyprus: a virtually complete jug which, according to established pottery chronology, should be dated to Late Helladic IIA, i.e. somewhere around 1500 BCE. Another of these rich early tombs, Tomb LL, was excavated in 2017. 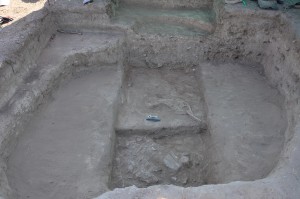 It contained complete/intact vessels of Bichrome Wheel-made Ware, White Slip I and Base-ring I but no (!) Mycenaean pottery. 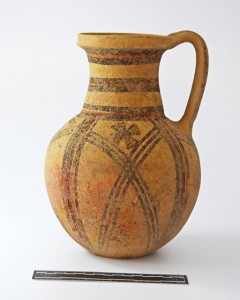 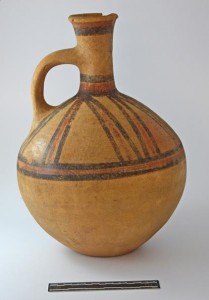 An extraordinary find from Tomb LL takes the form of a complete Late Minoan II/IIIA1 piriform jar of medium size from around 1400 BCE. It is decorated with a complicated pattern of birds and other pictorial motifs which have excellent parallels in vessels from the Palace of Knossos. 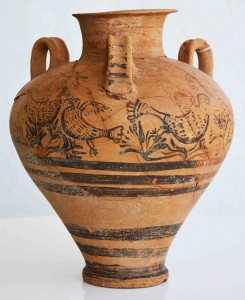 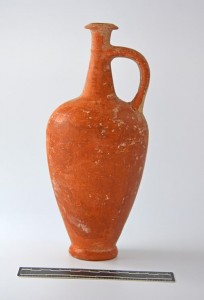 It seems that the skeletons (a least five in number) were part of a secondary burial, since the bones were not found in situ, whereas the tomb gifts were complete and even intact. Around the bones of the hand of one of the skeletons were nine haematite weights of varying size.

They were intentionally placed there, most likely in a bag of perishable material, e.g. leather or textile, and will be used to establish the local weight system.

Other excavated “pits” in Area A turned out to be offering pits and wells. One well (Z9) had been reused as a tomb. Amongst the skeletons was a female who was buried with two infants “in her arms” and a new-born baby (possibly a “coffin birth”) between her legs. 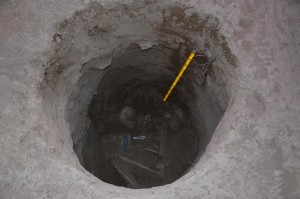 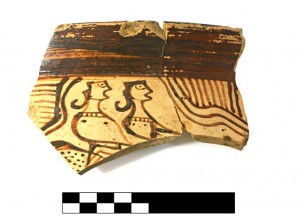 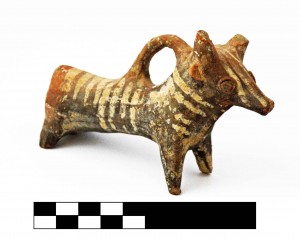 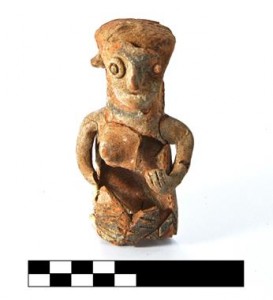 Offering Pit Z6, one of the notched scapulae.

The plans for 2018 are: (1) the extension of CQ1 in both depth and area; (2) the investigation of additional “pits” in Area A; and (3) additional geophysical prospecting and (4) test trenches guided by new results from geophysical prospecting in order to verify a possible city wall and to add further information about the size of this important city; (5) mending and conservation of finds from 2017.

Any suggestions concerning the use of the two objects below are welcome! 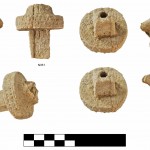 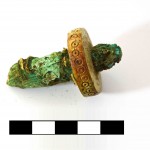 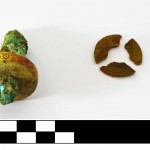 Distaff of ivory? 4 thin discs of ivory are mounted on the pin 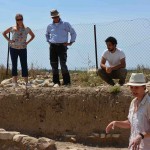 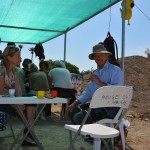 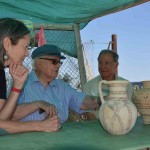 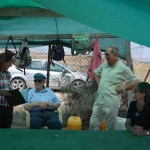