Despite the Corona situation, a reduced excavation campaign could be carried out in October – November 2020 under the direction of Peter M. Fischer and Teresa Bürge, both from the Department of Historical Studies, University of Gothenburg, Sweden. Due to the smaller group of participants, not sufficient for excavations in the city, the settlement was not further investigated (see City Quarter 1 in previous reports). Thanks to the support by Kirsi Lorentz and Sorin Hermon with personnel from the Cyprus Institute, excavations concentrated on the continued exposure of Tomb RR in Area A which had begun in 2018 and continued in 2019. As a result of the large-scale magnetometer survey of 23 hectares conducted in 2017 (and supported by georadar in 2018), another magnetic anomaly, “Tomb” SS just to the south of Tomb RR, was investigated.

With regard to the cooperation between the expedition and the Cyprus Institute see: https://face2face.cyi.ac.cy/news 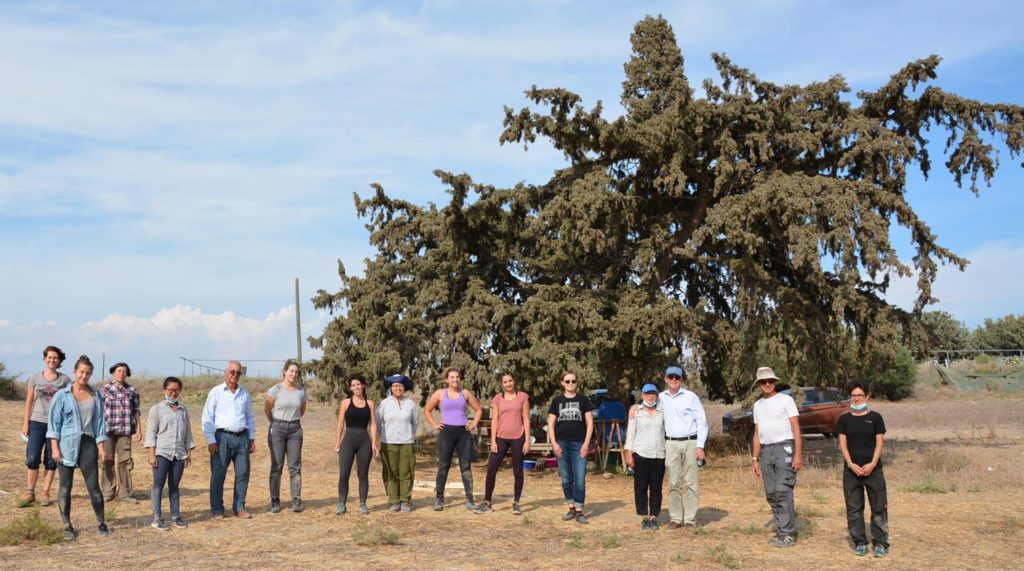 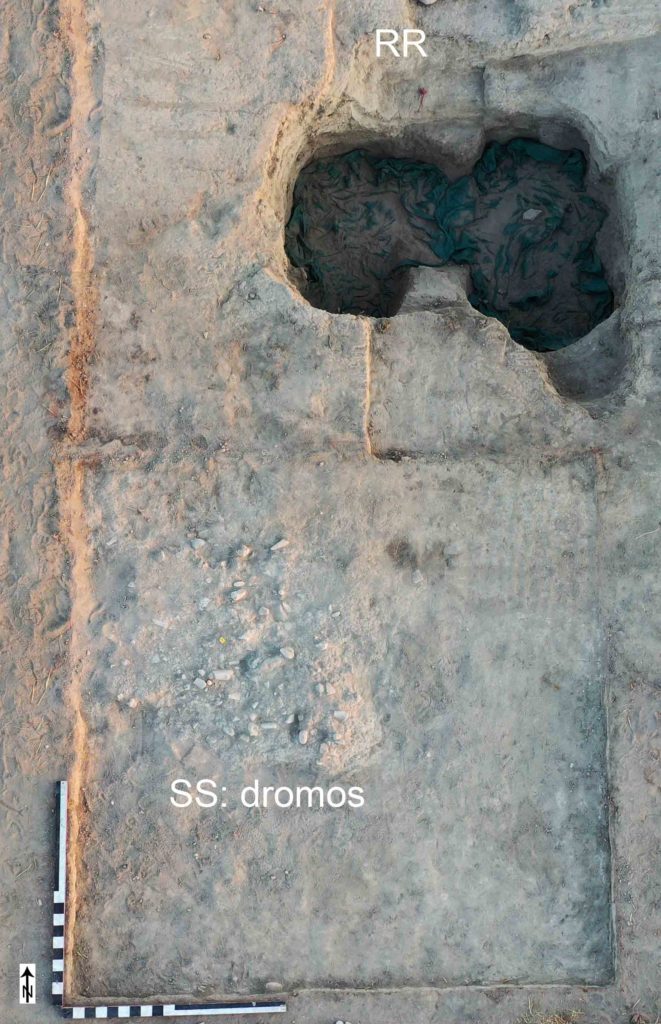 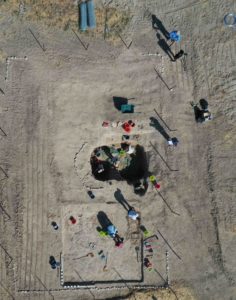 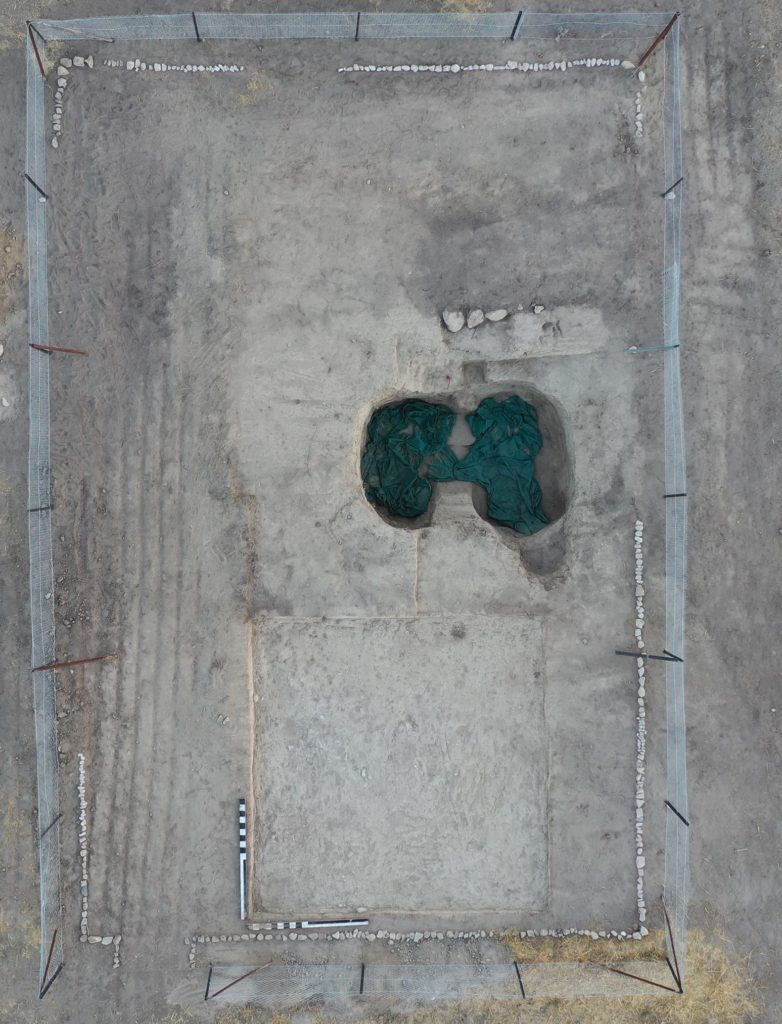 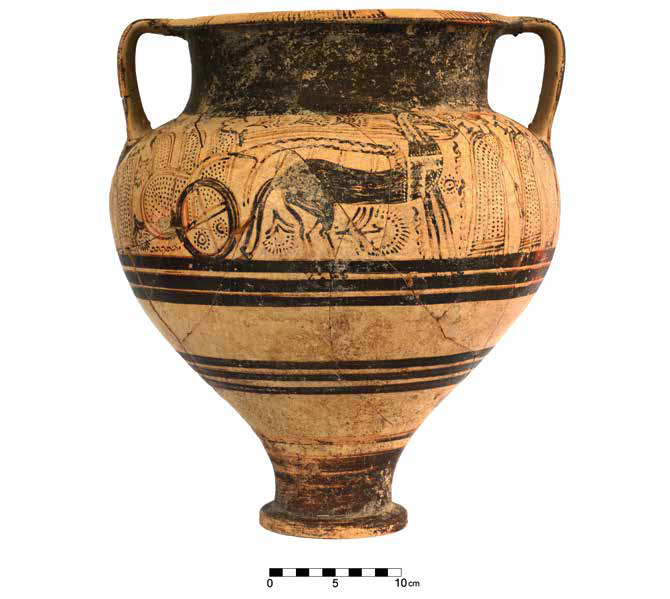 Fifty-two human skeletons were found in this undisturbed double-chamber tomb together with numerous tomb gifts many of which were imported from a vast area. A few skeletons were in situ while others were moved in order to provide space for additional burials. 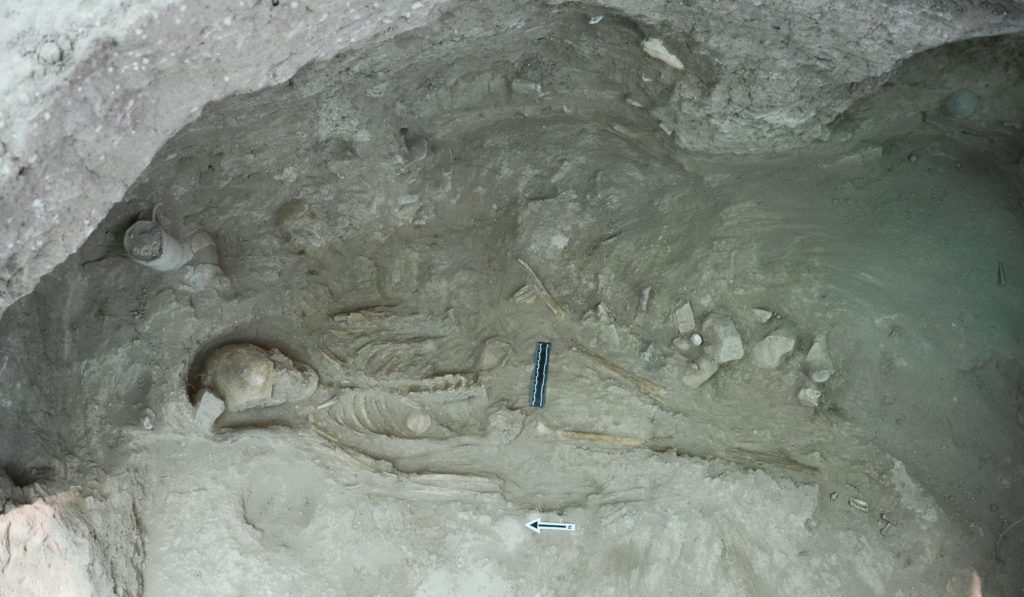 Some human remains were partly burnt, others were covered with traces of soot. Several animal bones were also exposed to fire, some even to high temperatures. 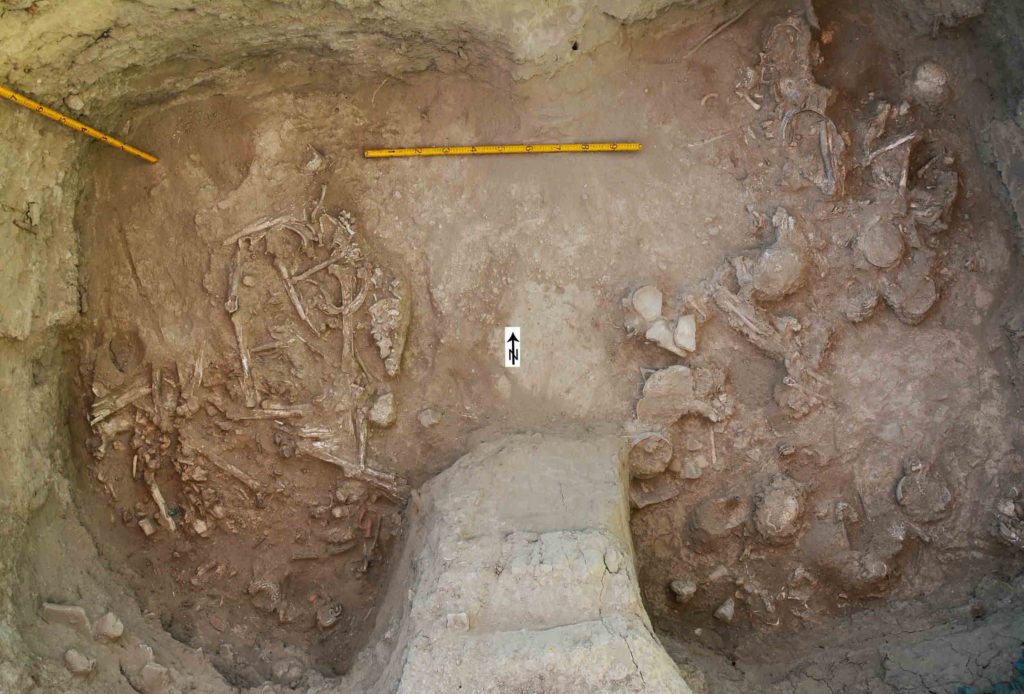 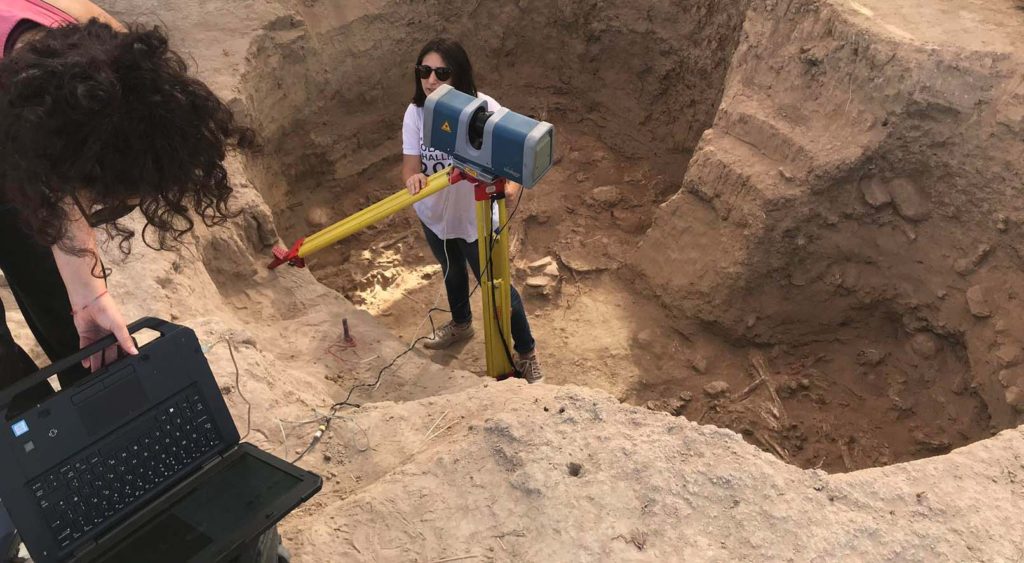 In addition to the large quantities of fine ceramics mainly dating to LH/LM IIIA1–2 (c. 1400-1300 BCE), there are outstanding finds of other materials. Foremost among these is a seal of haematite from the Old Babylonian empire. This seal, which preliminarily dates to the 18th century BCE, depicts sophisticated carvings of a god, humans and animals. This means that the seal has been used for approximately 300 years before it ended up in this tomb. Extraordinary is the three-lined Akkadian inscription which mentions the name of a king for which we are currently looking in various cuneiform archives. The seal was partly re-carved most likely in Cyprus or perhaps in the northern Levant only to a minor extent affecting the original carvings. 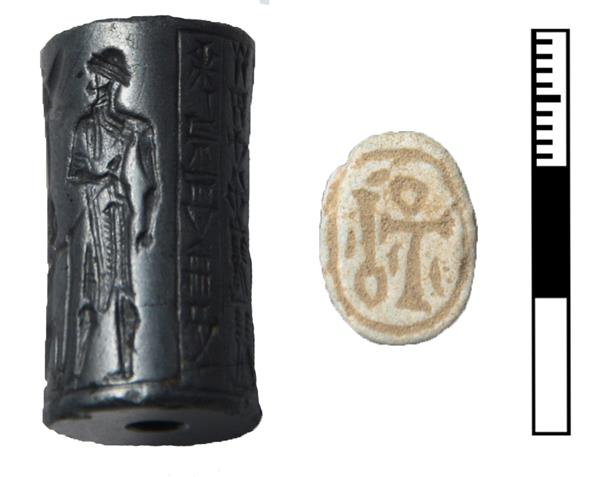 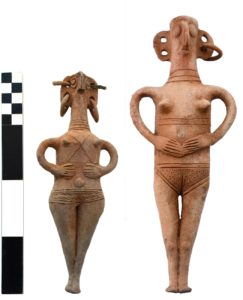 Other finds include an Egyptian lotus-shaped pendant with inlays of stones and faience as well as a number of other decorative pieces. Another find from Egypt is a scarab with hieroglyphs reading: “(All) Good. (All) Life” (our thanks go to J. Eggler, Fribourg). The scarab can be dated to after 1350 BCE, most likley from the period of the reign of Akhenaten and Nefertiti. From each of the two chambers comes a fairly large female figurine with bird face and earrings: one of them with three ceramic and one bronze earring (see illustration), and the other with just one ceramic earring in situ. Obviously, the buried individuals belonged to a very rich family, probably the ruling class of the city.

This feature is different from Tomb RR. It can best be described as an underground cupola which on the inside is covered with a thick layer of a white plaster-like substance that stabilizes the structure. The space could be reached via a possible dromos. There may be a connection to the adjacent Tomb RR. Hundreds of intact/complete vessels of fine table ware with a high proportion of imports were found mainly along the margins of this structure but also in its centre. 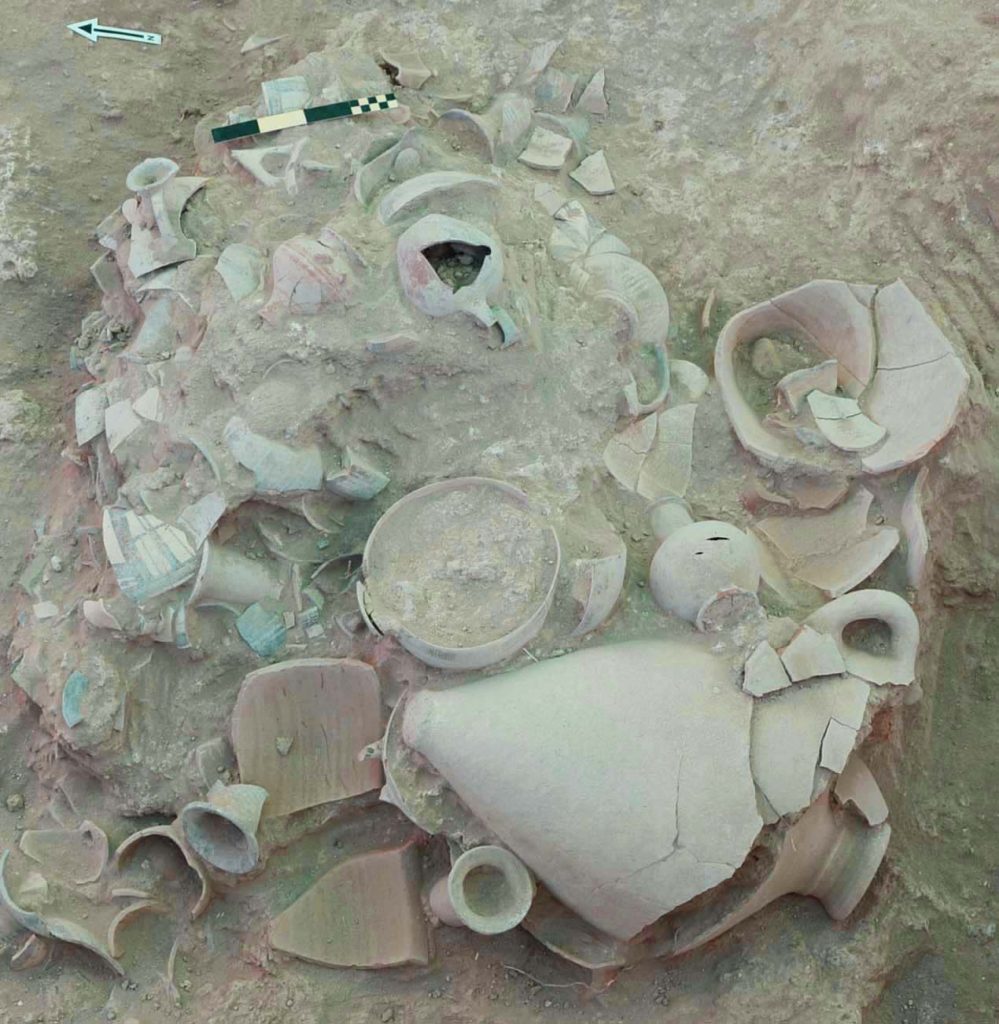 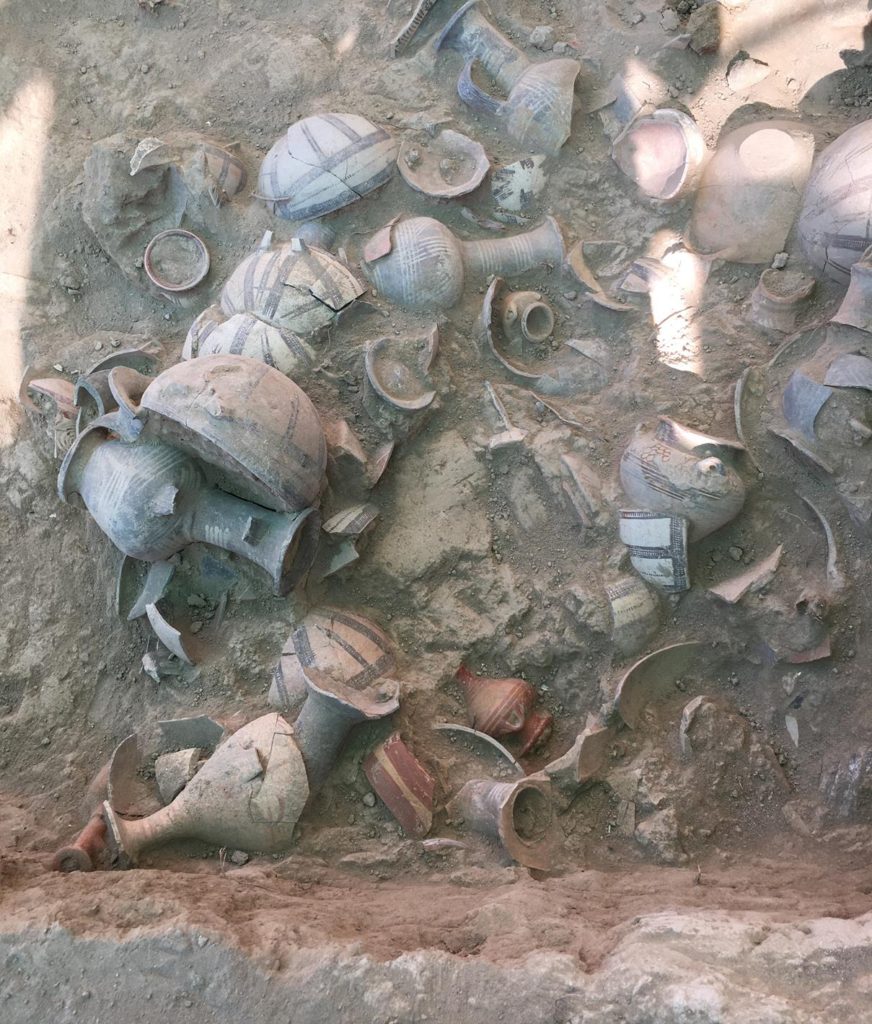 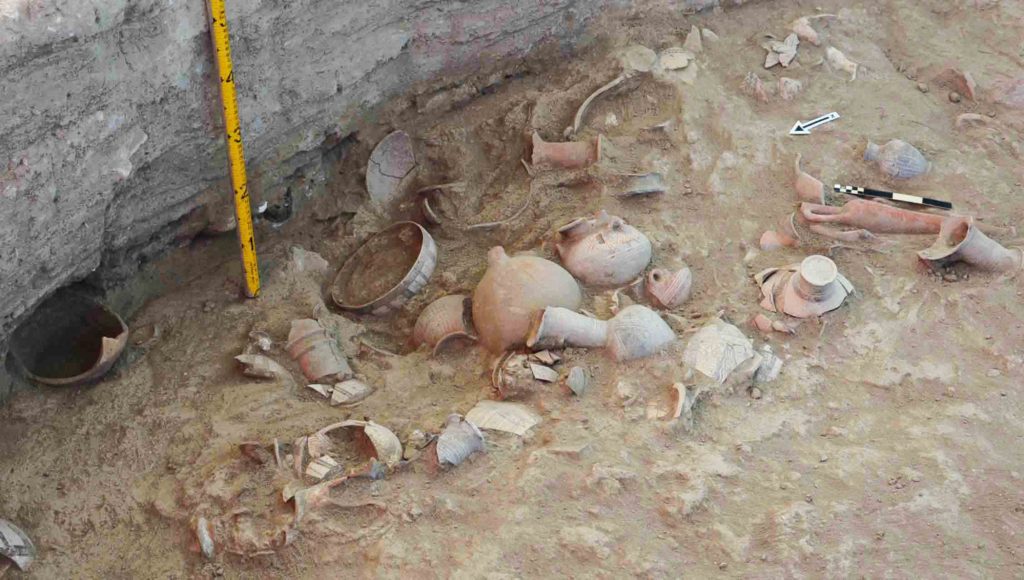 Just a small portion of all ceramics has been processed. Consequently, at this stage only an overview can be provided. Cypriot pottery consists mainly of White Slip II Mature, and Base-ring I and II. Imports are from the Mycenaean, Minoan and Anatolian cultural spheres dating mainly to LH/LM IIIA(1–)2. The numerous imports from the Mycenaean sphere of culture comprise a large painted cult vessel in the shape of a rhyton with plastic decorations (under restoration). Minoan imports include a feeding jug, juglets and kraters, and Anatolia is represented by an array of Red Lustrous Wheel-Made vessels. Given the fact that the enormous number of finds are not associated with skeletons, this structure must be interpreted as something else than just a large tomb. Our interpretation is that we have exposed a place of worship where rituals in connection with funerals were practiced.

At the end of the season, the excavated structures were backfilled, covered with iron sheets and the whole area was fenced.

Both structures were used from about (1500/)1400 to 1300 BCE and mainly in the later part of this period. However, there are also earlier (residual) finds.

These include paleoparasitological analyses, for which soil from areas close to the crania, abdomens, hands and feet was collected, as well as faunal, archaeobotanical and micromorphological analyses. To determine the vessel contents and to reconstruct the food and drinks consumed and/or deposited in the course of the burial rituals, selected sherds were sampled for organic residue analyses. In addition, bone and dental samples were collected for aDNA, strontium isotope and heavy metal analyses, and samples from alloyed metals were taken to study provenance and production techniques. Studies of absolute chronology, for which carbonised short-lived botanical remains were collected, and provenance studies of pottery including NAA and petrography are under way.

The nature of the finds reflects the central role of Hala Sultan Tekke as a trading metropolis in the Mediterranean economic system. The city’s wealth was based on export of copper as a product of intraurban metallurgy, purple fabrics and trade. There are unequivocal cultural and economic connections between the city and a large geographical area. Imports arrived at Hala Sultan Tekke from a region covering Sardinia to Mesopotamia, and from Anatolia to Egypt.

We are much obliged to the Department of Antiquities of Cyprus for all support. Our sincere thanks go the following foundations and academies: The field work was mainly sponsored by the Torsten Söderberg Foundation (Swedish id. ÖT4/18). Additional research was supported by the Royal Swedish Academy of History and Antiquities in Stockholm (Swedish id. FS2019-0100), The Royal Society of Arts and Sciences in Gothenburg (2020), The Swedish Research Council (Swedish id. 2015-01192), and INSTAP (USA id. 0000000060). Much support has been received by the personnel of the Cyprus Institute in Nicosia headed by Kirsi Lorentz and Sorin Hermon. 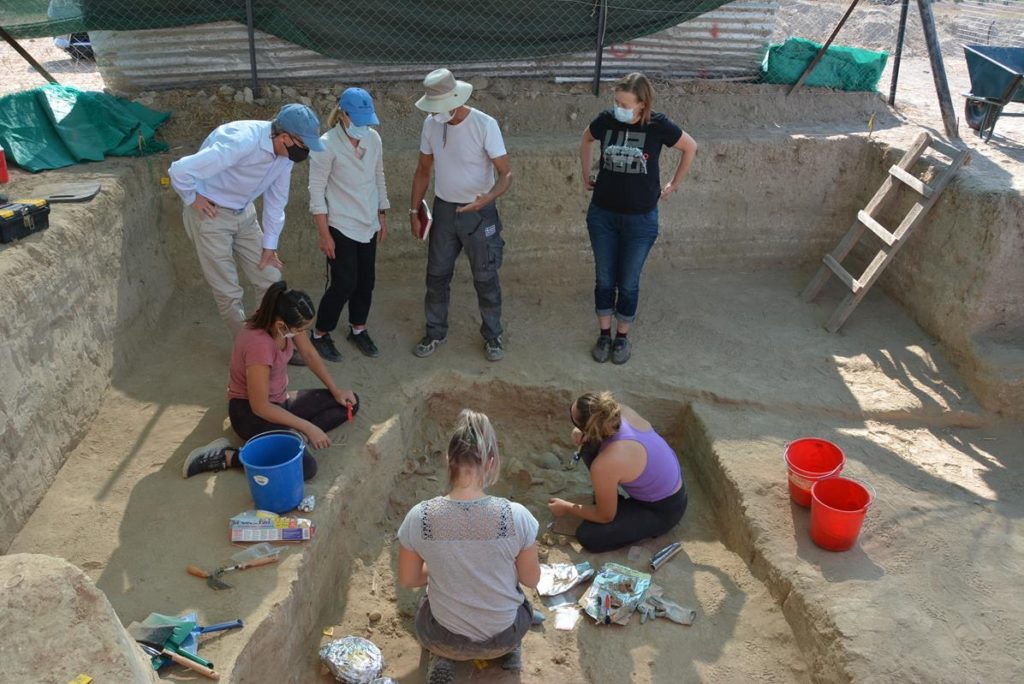 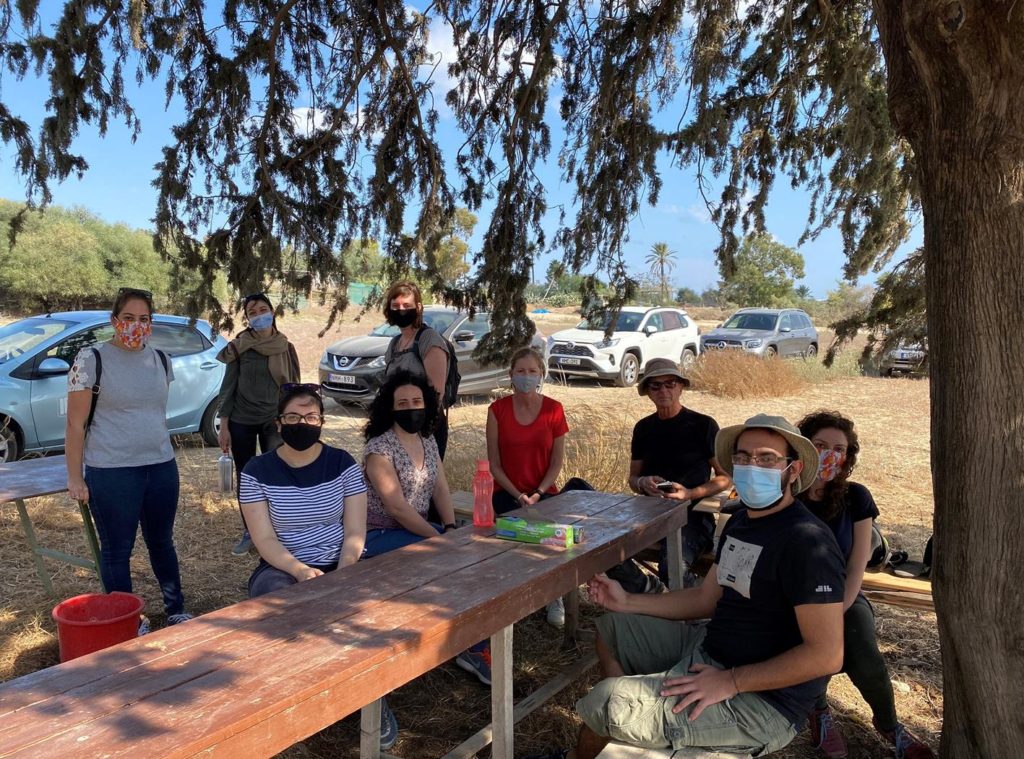