City Quarter 1 (CQ1, former Area 6)
In May and June 2016 the seventh season of the excavations at the Bronze Age city of Hala Sultan Tekke excavations continued in CQ1 where excavations took place in 2010–2012. 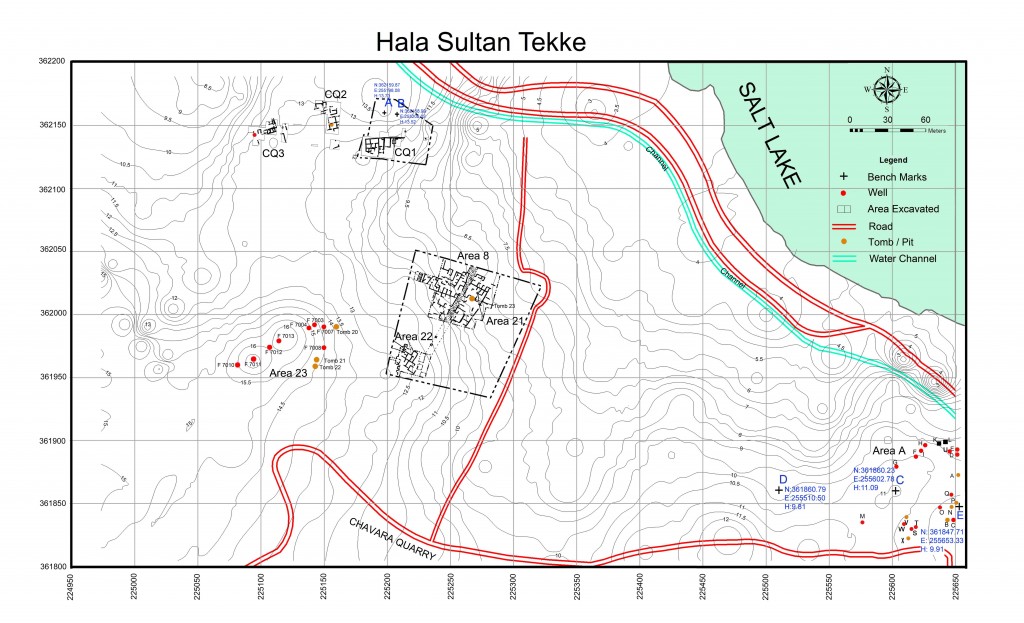 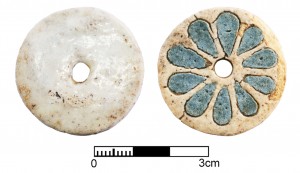 The new excavations brought to light a combined small-scale industrial / domestic quarter which was occupied in three phases (Strata 1-3) which are dated roughly to the 13th and 12th centuries BCE. Both phases, Stratum 1 (most recent) and 2 came to a violent end. After the destruction of Stratum 1 the city was abandoned. 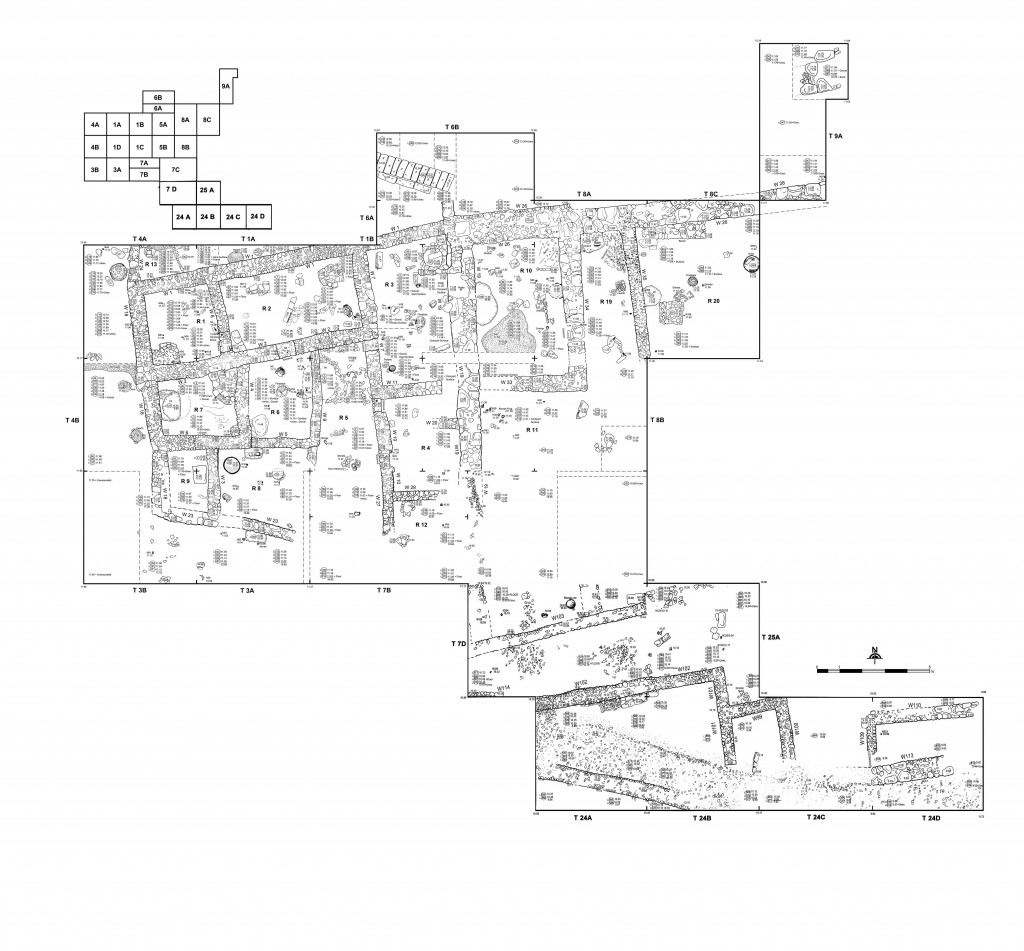 Stratum 3, the oldest phase of occupation was exposed in a test trench. The pottery from there gives the impression of being older than that of Stratum 2. The area, where the test trench was openend up, is is one of the few spots where occupation associated with Stratum 3 was found. Stratum 3 will be further investigated in 2017.

Area A
Additional excavation took place in Area A which is on a plateau some 600 m to the south-east of CQ1 and close to the mosque of Hala Sultan Tekke (see map above). In 2013, a surface survey in Area A led to the discovery and subsequent excavation (2014-15) of a reused well, Tomb A from around 1200 BCE. 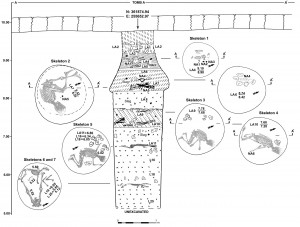 Tomb A with the burials of six humans and a dog

Following the discovery of this tomb, magnetic prospecting supported by a georadar survey was carried out in 2014 by I. Trinks and a team from the Boltzmann Institute at the University of Vienna. The geophysical surveys, which covered an area of 1.1 hectares, indicated more than 80 circular anomalies (“pits”) of which Pits B–Q were excavated during the seasons of 2014 and 2015. They turned out to represent Late Cypriot wells and offering pits – most of them older than Strata 1-3 in the city. In 2016, seven more “pits” (R – X), of which Offering Pit V and Tomb X were of the utmost importance as regards the pre-13th/12th century BC occupation of the city, were excavated and resulted in spectacular finds.

Tomb X
In the map of the magnetic survey this anomaly has the shape of a double pit. It is some metres south of Pit V (see below). On the magnetometer map it is almost identical in shape and size with Pit V thus resembling a recumbent “8” which is orientated exactly west-east. It is 3–4 m x 2 m in size and was dug into fairly soft, clay-rich, soil. Already in the border zone between colluvial soil and undisturbed soil a large amount of scattered pottery came to light. The contents of this double-pit revealed a major difference in comparison to Pit V, namely, that there were also plenty of human skeletal remains in addition to non-ceramic finds, which were virtually absent in Offering Pit V. We exposed the remains of 17 individuals comprising eight infants and nine adults. The obvious disorder amongst the skeletons and finds should be explained by the reuse of the tomb for the burial of additional individuals. The tomb gifts include, inter alia, c. 70 ceramic locally produced and a multitude of imported vessels, gold jewellery, weapons, scarabs and seals. Tomb X has been used from roughly 1500 to 1250 BCE. 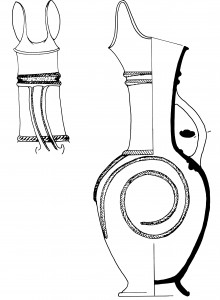 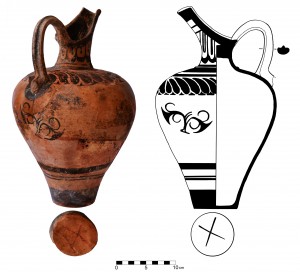 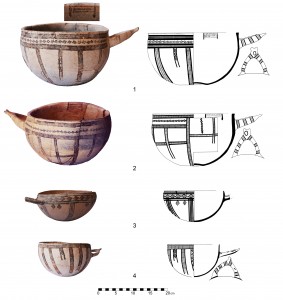 One of the five cylinder seals (haematite, Tomb X) 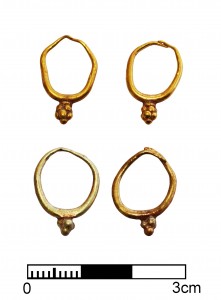 Offering Pit V
The map of the magnetic survey shows a double pit (L46 West and L46 East) which also resembles a recumbent “8”, approximately 3–4 m x 2 m in size (see Tomb X). It was dug into fairly soft, clay-rich, soil. Also here in the border zone between colluvial soil and undisturbed soil a considerable amount of Mycenaean pictorial sherds of high quality vessels showing skilfully executed decorations of humans, animals, plants and geometric motifs were found. In the centre of the 8-shaped feature lay a concentration of large blocks of stones. The function of these blocks was to seal the feature which meant that there was access to both pits from just one, centrally situated, circular feature – a sort of stomion which couild be reopened whenever another “ceremony” was planned. There are no skeletal remains in Pit V. Also here some 70 ceramic containers, many of them imported, in addition to figurines were found. We interpret the feature as an offering pit which is somewhat more recent than Tomb X according to the pottery, i.e. from roughly 1400 to 1200 BCE. 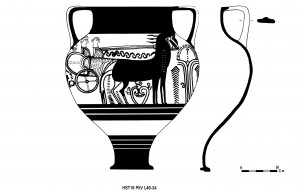 One of the Mycenaean Chariot Kraters (Pit V) 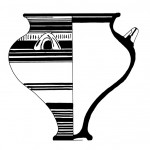 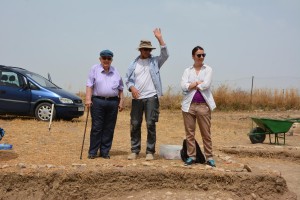 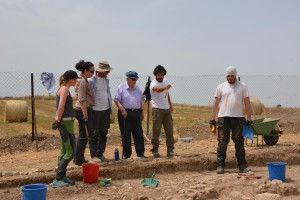 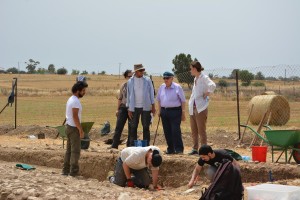 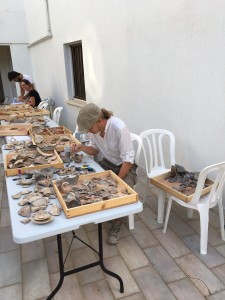 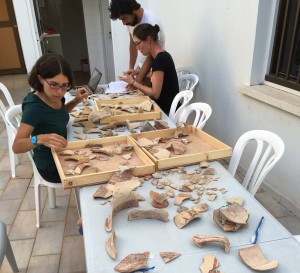 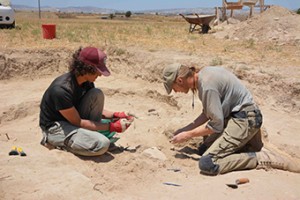 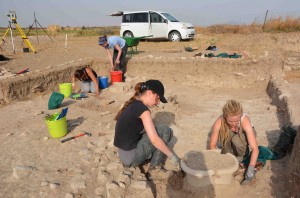