In 2022, directed by Peter M. Fischer from the University of Gothenburg, Sweden, the thirteenth season of excavations at the Late Bronze Age city of Hala Sultan Tekke was carried out in the cemetery of Hala Sultan Tekke (Area A) in cooperation with the Department of Antiquities directed by Marina Solomidou-Ieronimidou and with the support of Anna Satraki, the local archaeological officer. 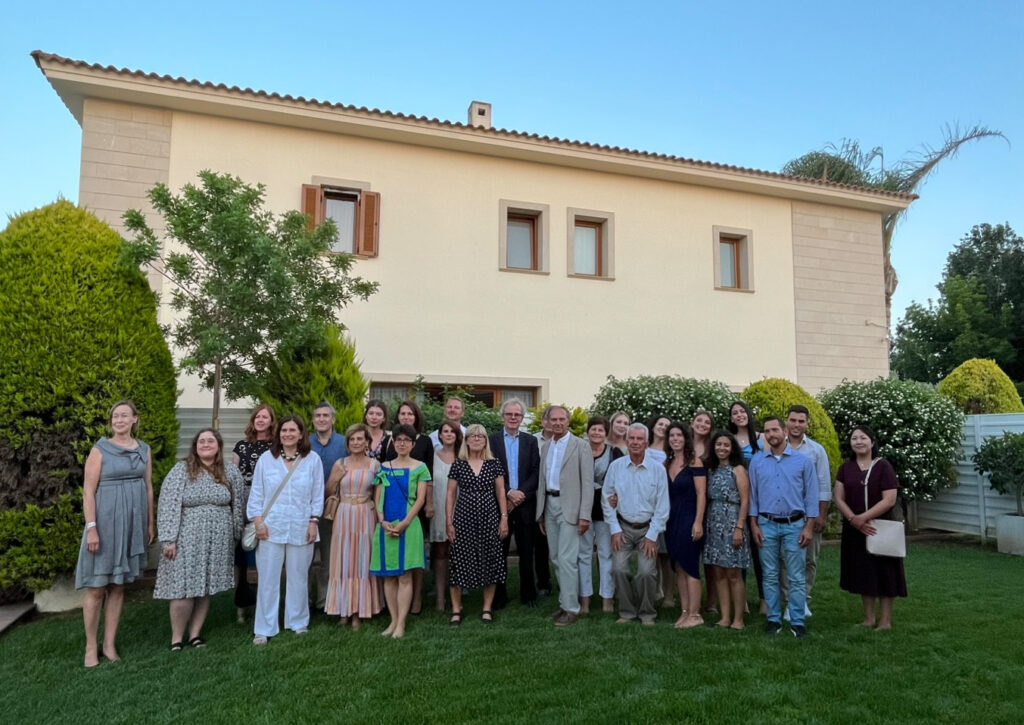 The 2022 team at the residency of the Swedish ambassador H.E. Anders Hagelberg

The magnetometer map from 2017 indicated three adjacent magnetic anomalies (the later Tombs RR, SS, and TT) in an area that is exposed to intense farming. In 2018, the area including the three anomalies was fenced by the expedition. Tombs RR and SS were excavated from 2018 to 2021 (see previous websites). One of the main tasks of the excavations in 2022 was the investigation of the third magnetic anomaly which later became Tomb TT.  Another important task was the protection and investigation of areas where surface finds of pottery and bones as the result of farming suggest the presence of shallowly buried tombs. It has been demonstrated during previous seasons that agricultural activities and ongoing soil erosion present an immediate threat to the city’s cemetery. In the course of the surface survey in May 2022, the area to the northwest of Tomb TT revealed a concentration of sherds and bones, obviously uncovered and spread out of situ by the plough. Consequently, the coordinates of these finds were linked to the corresponding spot on the magnetometer map where a large and distinct magnetic anomaly can be seen. Provisionally, the anomaly was termed “Tomb UU” and, in agreement with the local farmer, a 20 m x 15 m large area was fenced off. 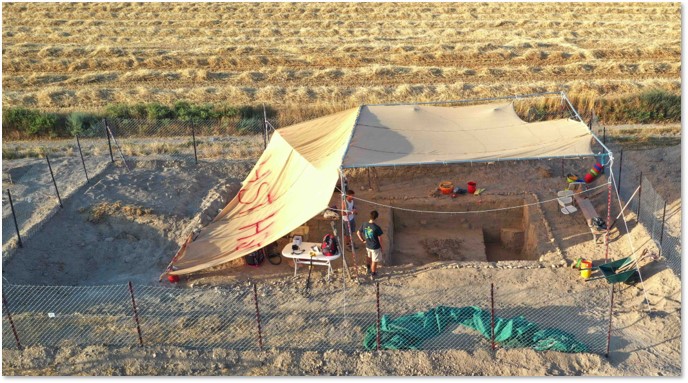 Parallel with the excavations, another group of the Swedish team supervised by Teresa Bürge assisted by Elena Peri, Lucia Avial Chicharro, and Juuli Ahola processed the finds from the excavations at the Terra Umbra storage facilities near the Larnaca Museum.

The 2022 team was supported by Kirsi Lorentz and Sorin Hermon, and their PhD students from the Cyprus Institute (CyI). The teams of the CyI provided expertise for the excavation and recording of the human remains, and 2D and 3D presentations of objects and find contexts in addition to material analyses. Upon recommendation by Sorin Hermon, Andreani Papageorgiou and Christodoulos Sofokleous functioned as the expedition’s surveyors. As in all previous seasons, Dina and Petros Georgiou were responsible for the basic logistics.

A shallow feature south of Chamber Tomb SS (excavated 2020/21) contained several vessels of Cypriot production but no imports. This feature seems to represent an offering pit connected to Tomb SS. 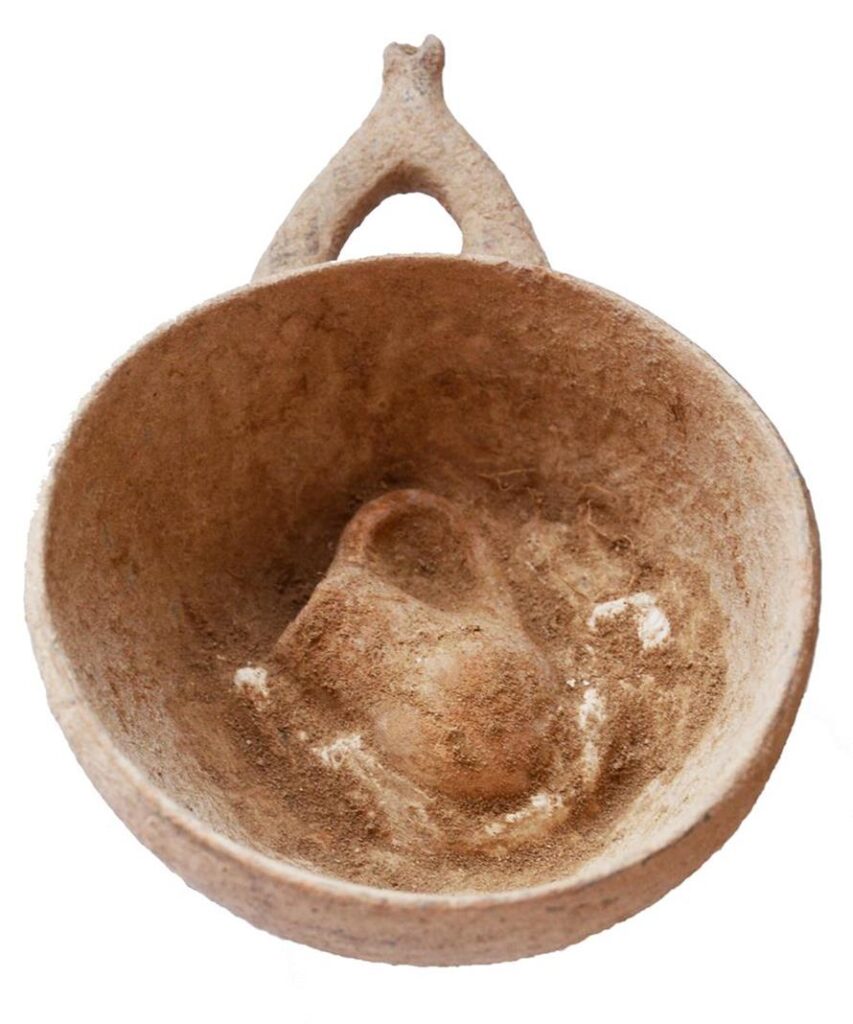 The section of the roughly circular and c. 1.75 m deep Tomb TT resembles the shape of a bottle: the bottleneck is approximately 2.5 m in diameter in the uppermost part; deeper down, the tomb widens to 3.25 m at floor level which is 11.28 m (average) above sea level.

According to the pottery and the human remains, the tomb was used for quite a short period, maybe 2(–3) generations, in the 14th century BCE. Some skeletons were found articulated and others commingled. When new interments took place, long bones of earlier deceased were carefully arranged in the north-western part of the tomb (see photograph below). Age at death and sex demographics, reports on pathological and other finds, and the results of aDNA and strontium isotope analyses have to await the outcomes of ongoing studies. 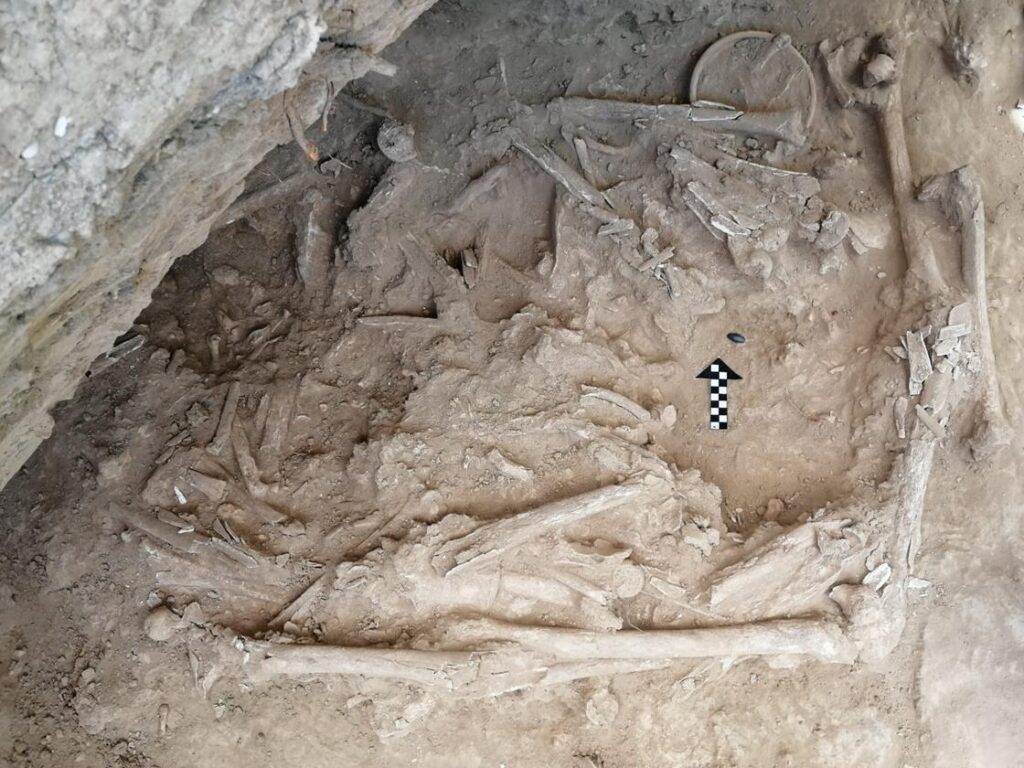 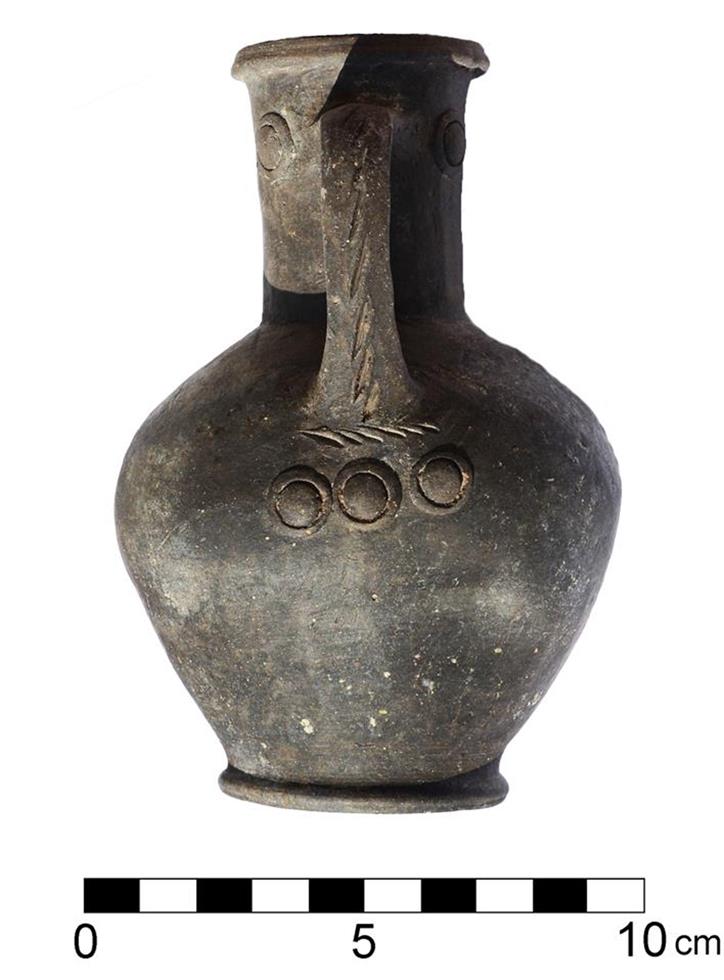 Tomb TT: Base-ring I imitating a juglet of bronze with rivets 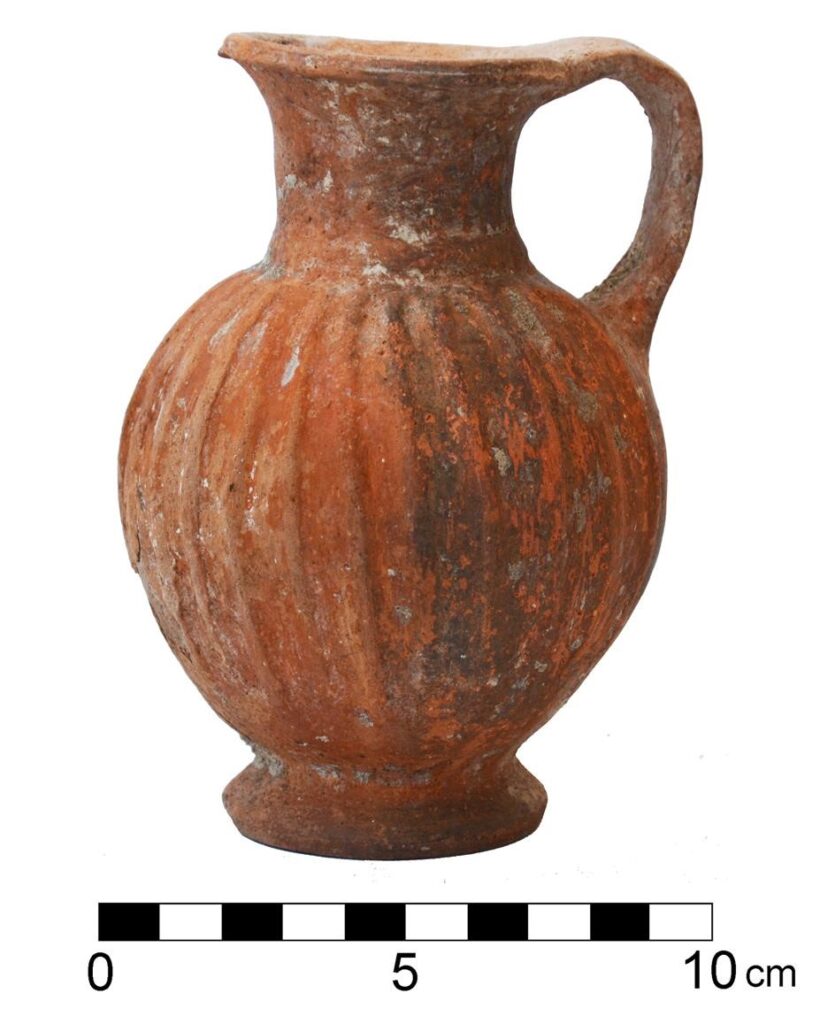 The ceramic assemblage consists mainly of locally made wares, i.e., Base-ring I and II, Monochrome, White Slip II, Plain White, Bucchero, White Shaved and White Painted VI. There are a few Mycenaean/Minoan imports but ceramics from Anatolia and the Levant which were common finds in the adjacent Tombs RR and SS (see previous websites) are missing. Among the small finds, several balance weights of haematite and bronze, scarabs, beads, finger rings, and bracelets should be mentioned.

In the introduction, it was stated that farming has affected the tomb which covers an area of at least 4 m x 4 m.  Nevertheless, it became obvious that ploughing has involved only the uppermost part of the tomb. There, the disorder among the human remains and finds was considerable, but the numerous complete and even intact objects demonstrated that the tomb has not been looted.

The preliminary osteological investigation points to a minimum of 20 individuals based on the number of crania. There are patterns of bone placement, including the particular stacking of os coxae (cf. Tomb TT where the long bones were arranged). The semi-articulated skeletons were all disarticulated below the rib cage. The location of the numerous complete and even intact finds and the disarticulated skeletal remains indicate an act of secondary mortuary treatment, i.e., previous interments were swept to the margins of the tomb when new inhumations took place. 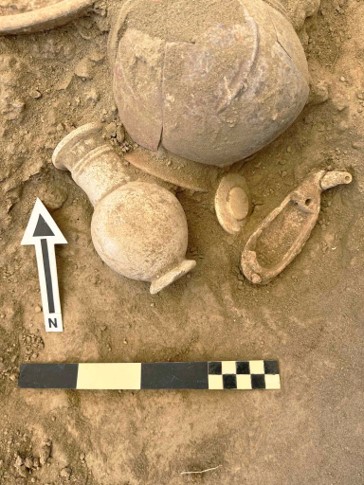 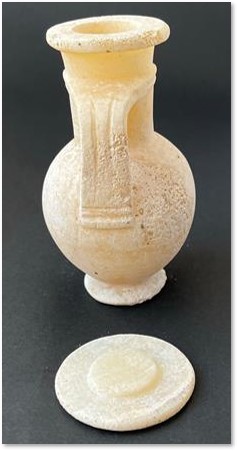 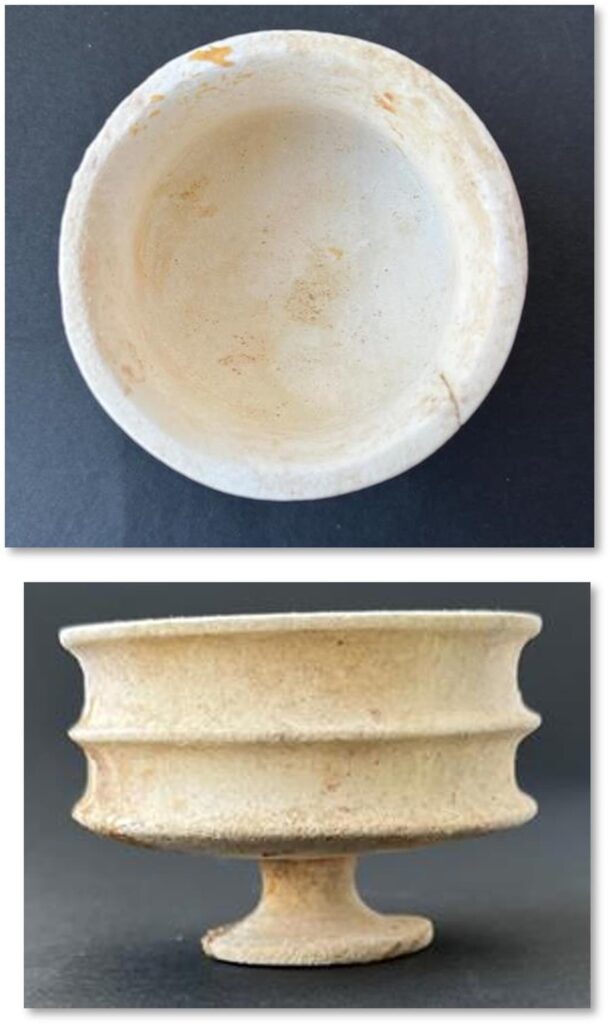 The ceramic assemblage consists of numerous locally made wares and many imports. Local wares include, in decreasing order of occurrence, Base-ring I and II, White Slip II, Plain White, White Shaved, Monochrome, Bucchero, and Red Slip. Among the imported wares dominate Mycenaean/Minoan pottery followed by Red Lustrous Wheel-made and Canaanite jars. Other finds comprise intact Egyptian-imported alabaster vessels (a juglet with a lid imitating Base-ring I and a tazza manufactured in two parts). Among the objects of ivory is a distaff with the head depicting a pomegranate. There is also some jewellery. 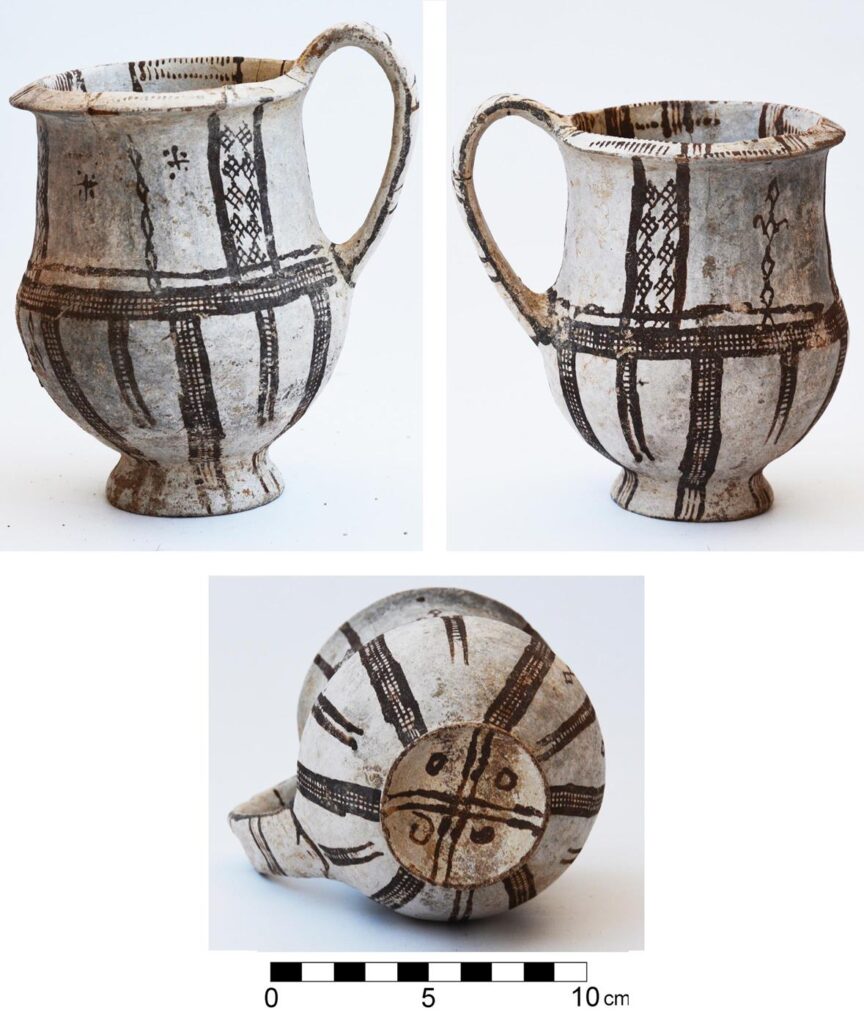 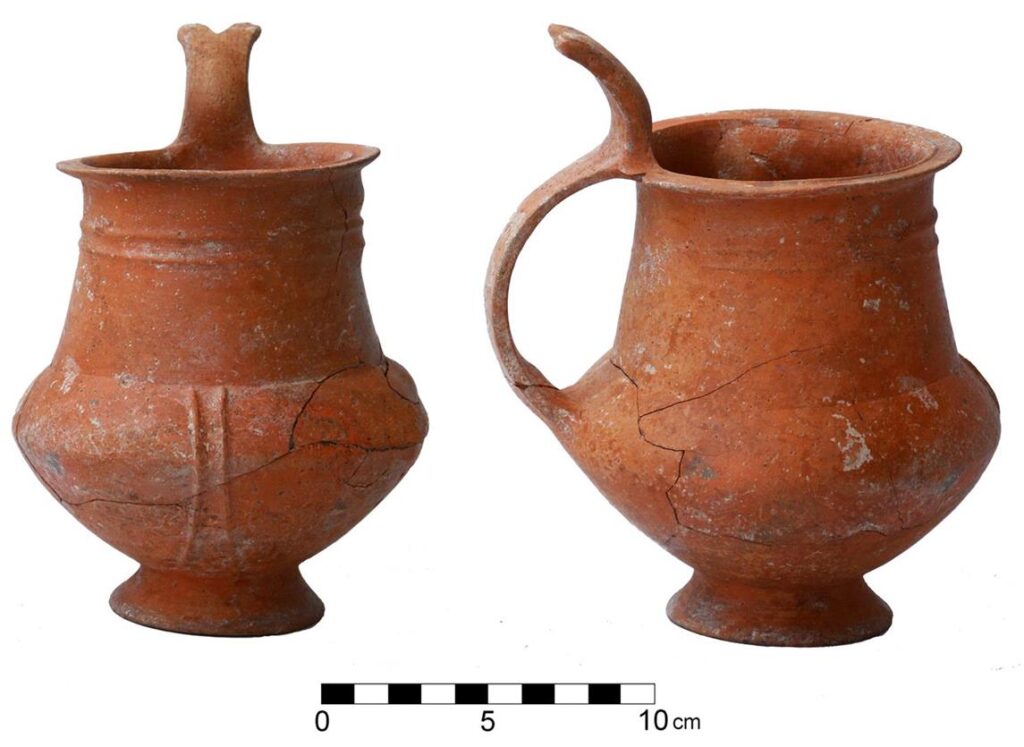 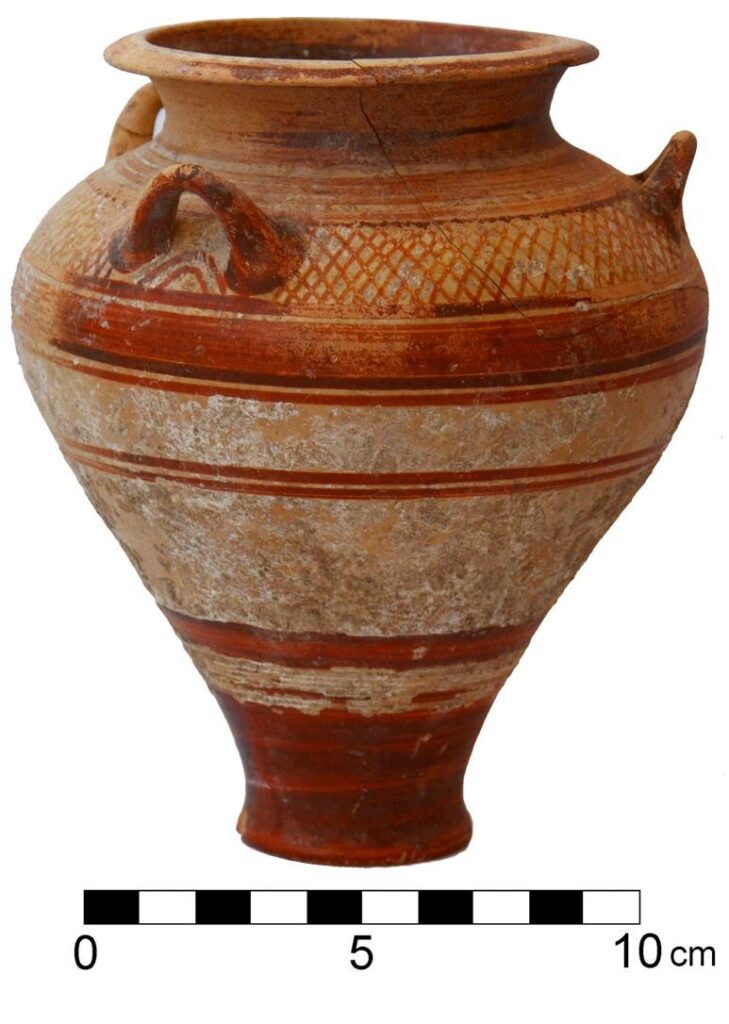 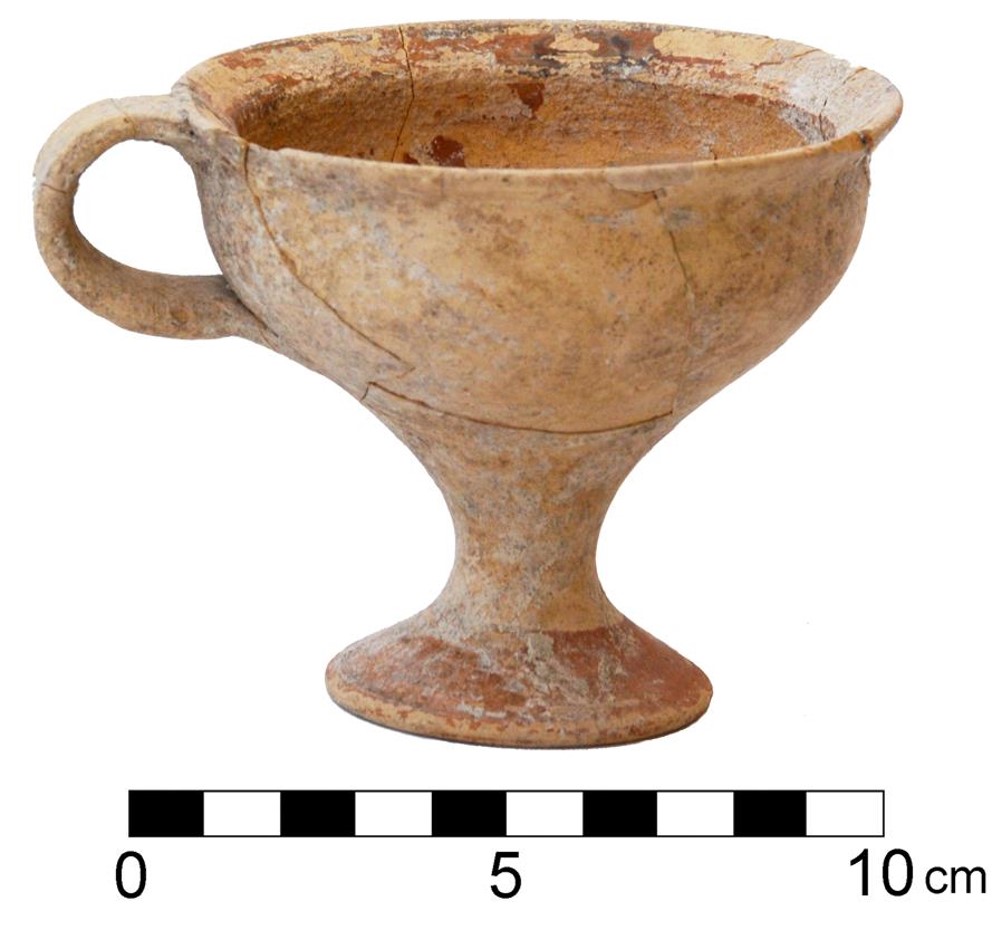 Ivory distaff with the head of a pomegranate

The tomb was in use in the 14th century BCE, and was possibly also in use during the outgoing 15th century BCE.

Although the main aim of the expedition is to investigate pre-14th century intraurban strata (see CQ1 on the website of 2019), the safeguarding, excavation, and recording of exposed tombs in the city’s cemetery became of equal importance. These tombs, many of which could be saved from destruction by farming and looting, represent an excellent complement to the stratigraphy of the city. So far, several of the excavated tombs are older than the hitherto exposed oldest intraurban strata and hint at the complete chronological sequence of occupation of the city of Hala Sultan Tekke, viz. c. 1630-1150 BCE.

The nature of the finds points to far-reaching trade and underlines the role of Hala Sultan Tekke as a trading metropolis in the Mediterranean economic system. There are unequivocal cultural and economic connections between the city and a large geographical area including the Mycenaean/Minoan, Hittite, Levantine, and Egyptian spheres of culture but also cultures as far away as Sardinia and Mesopotamia.

We are much obliged to the personnel of the Department of Antiquities of Cyprus, H.E. Anders Hagelberg, Ambassador of Sweden in Nicosia, the Cyprus Institute, and the Archaeological Research Unit for all support. Our sincere thanks go to the following foundations and academies: The fieldwork was mainly sponsored by the Torsten Söderberg Foundation. Additional funds came from INSTAP and the Royal Swedish Academy of History and Antiquities in Stockholm (Enbom foundation) and the Royal Society of Arts and Sciences in Gothenburg. 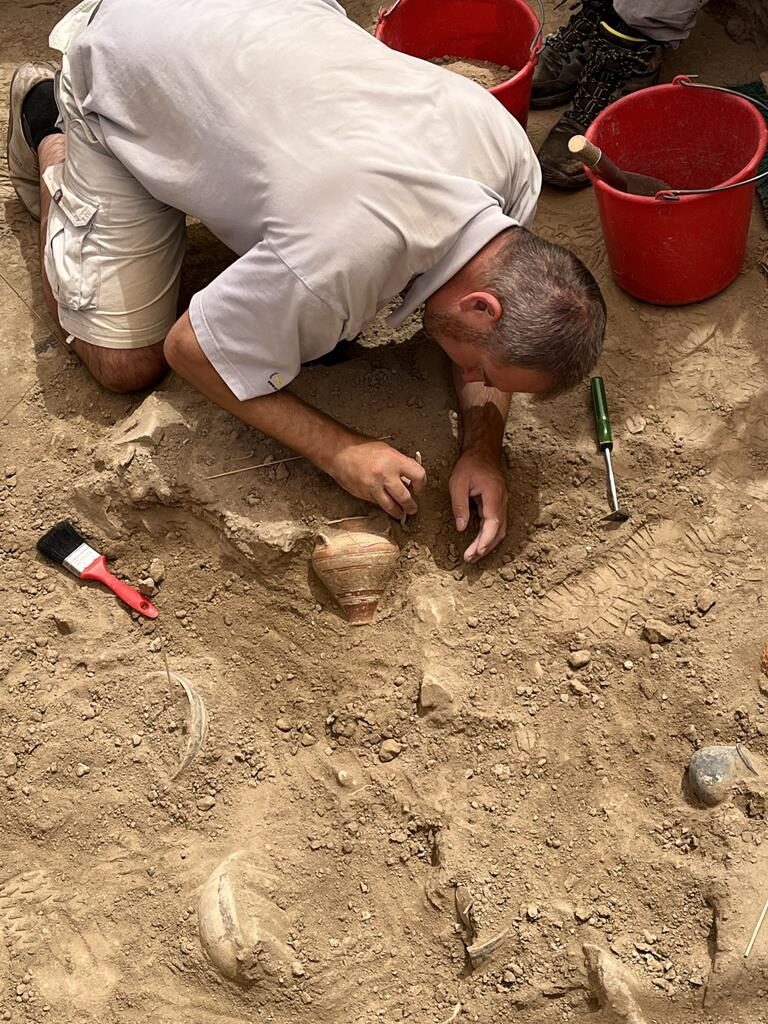 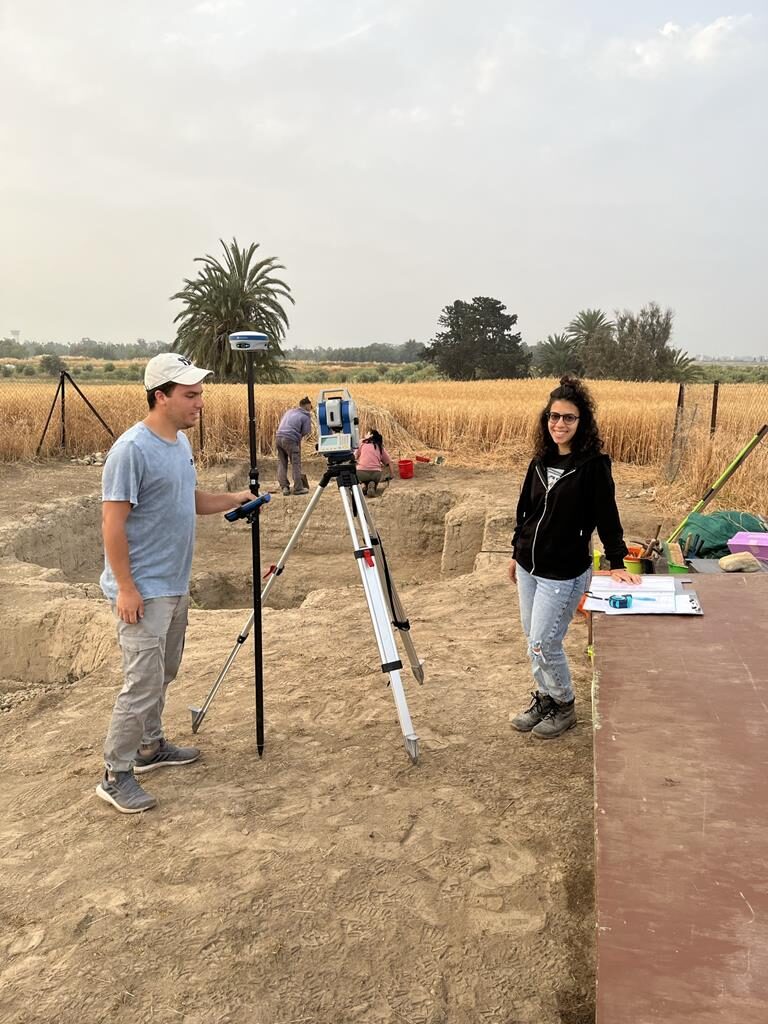 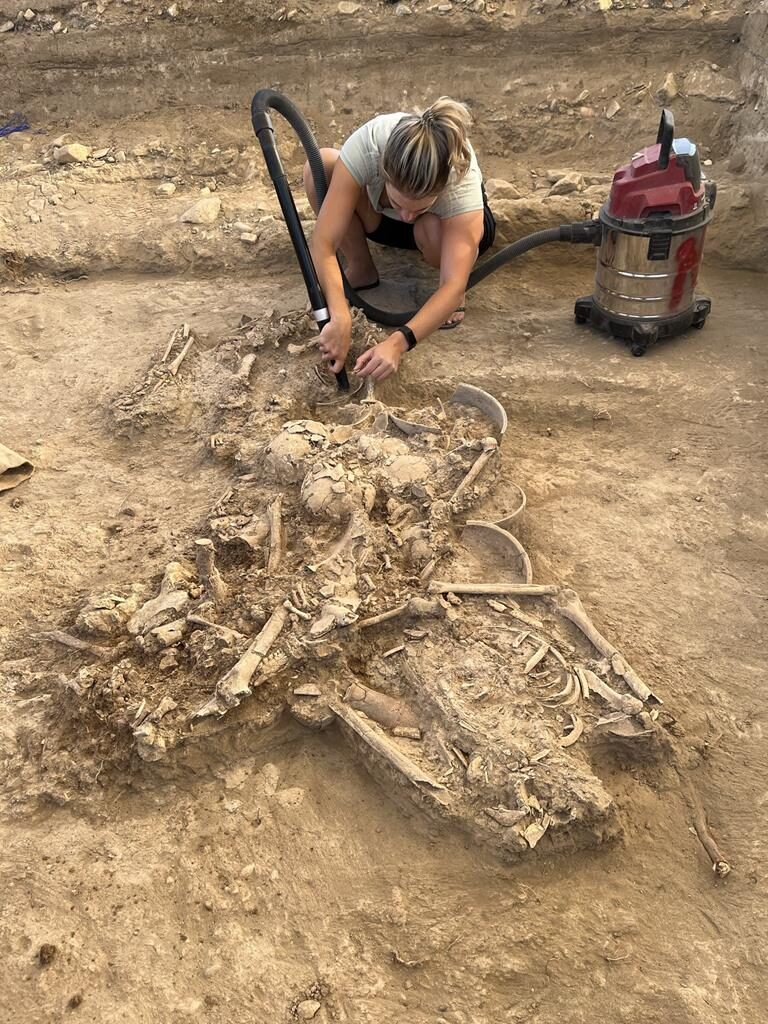 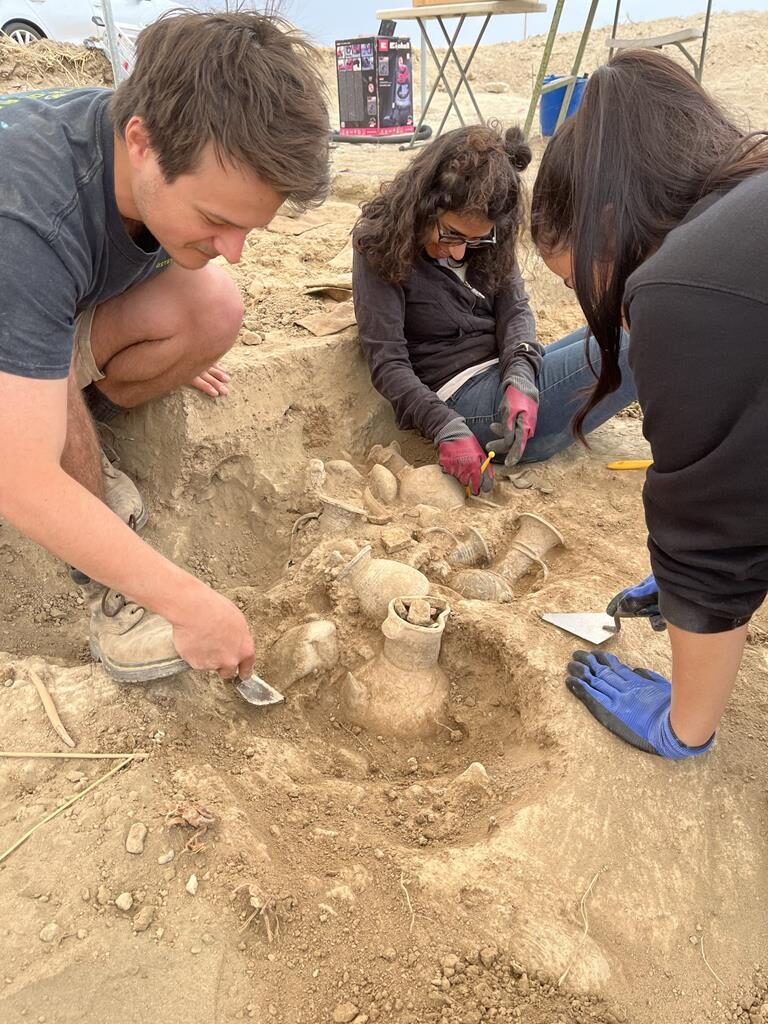 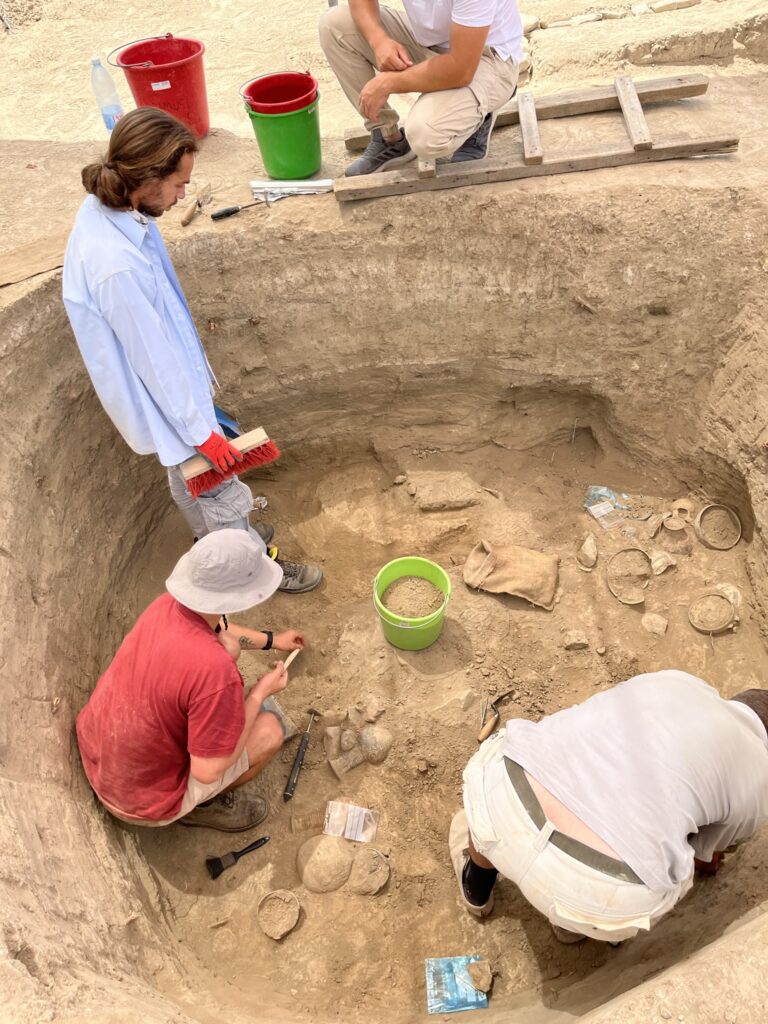 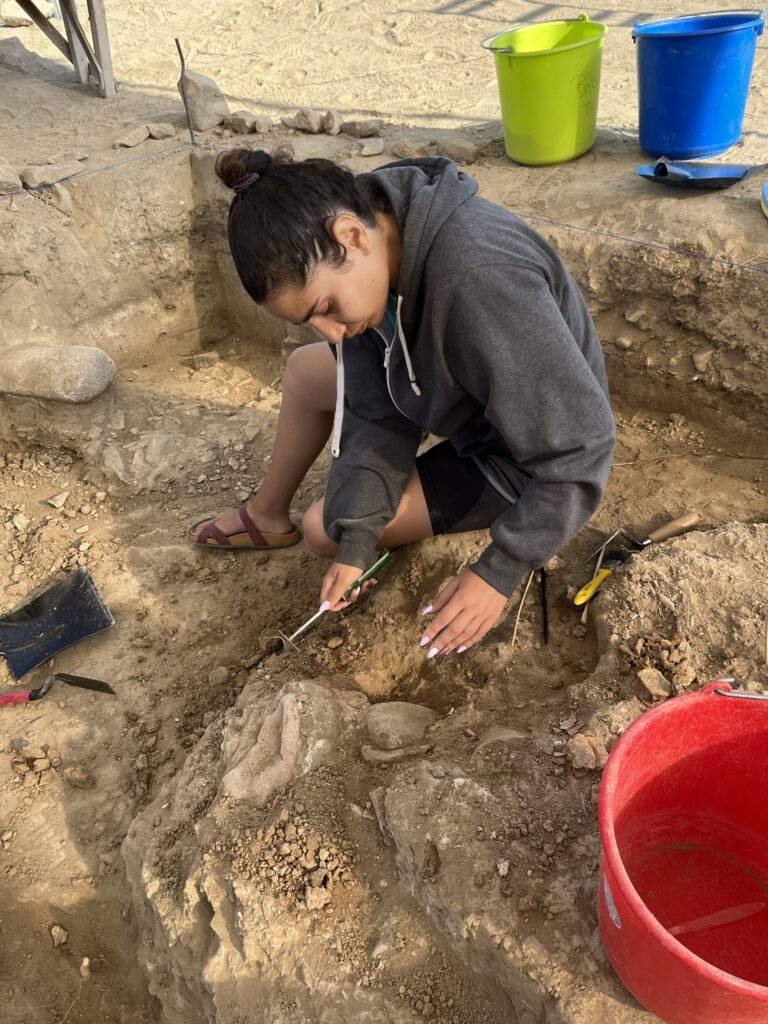 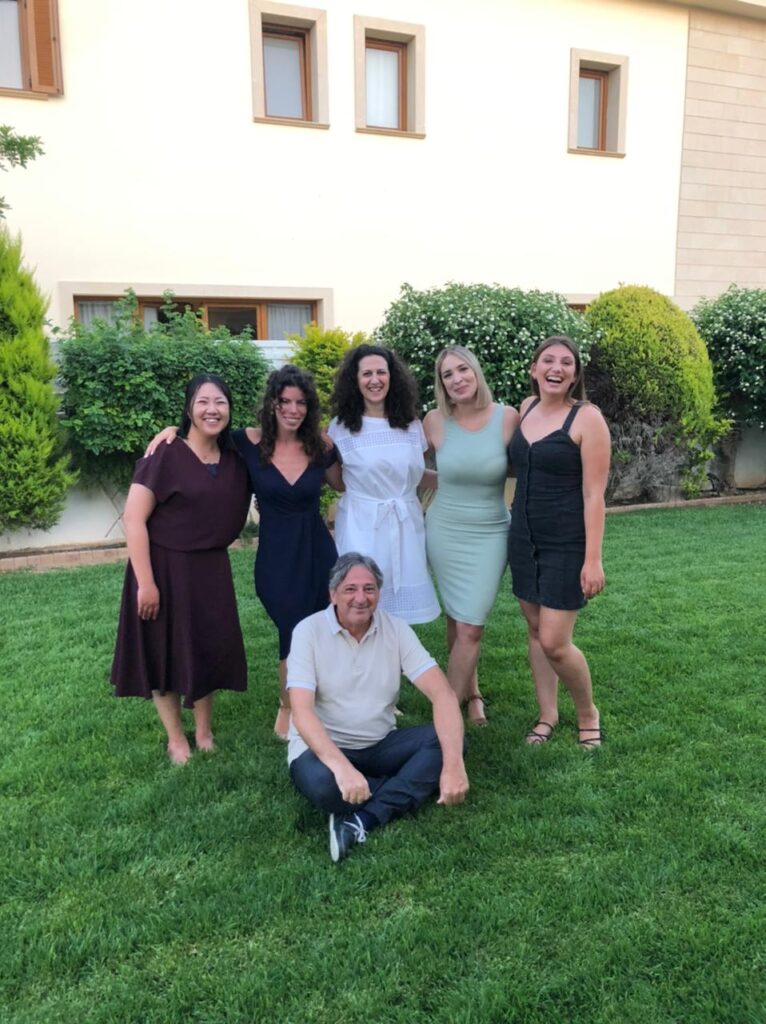 Work in the storage rooms of the Terra Umbra 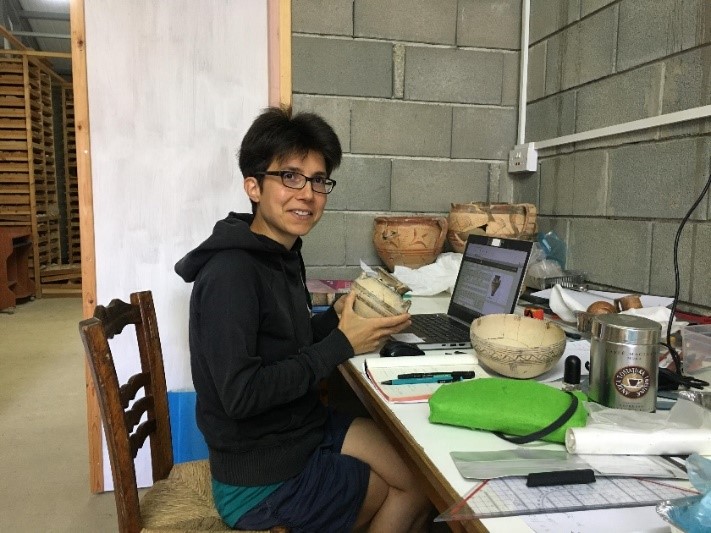 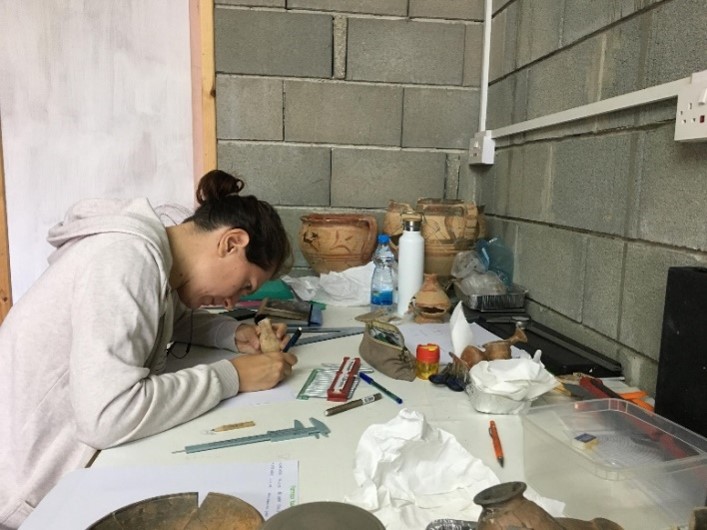 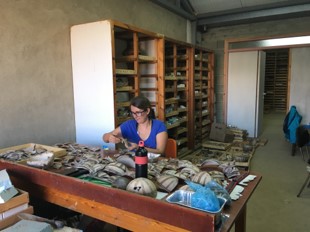 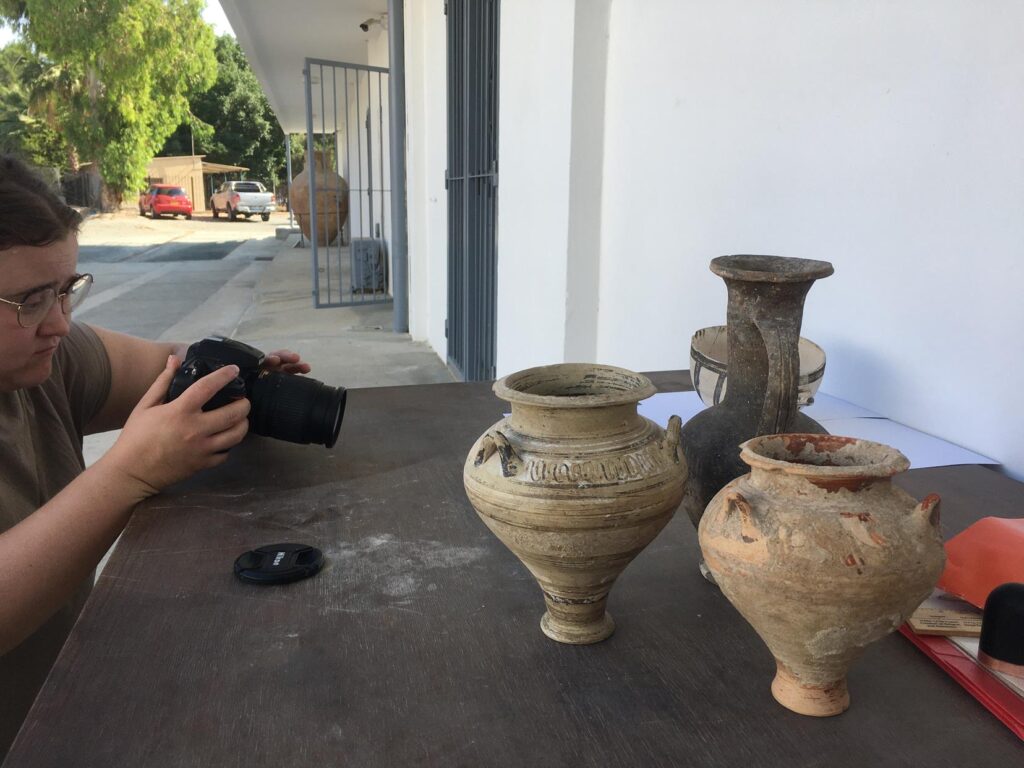 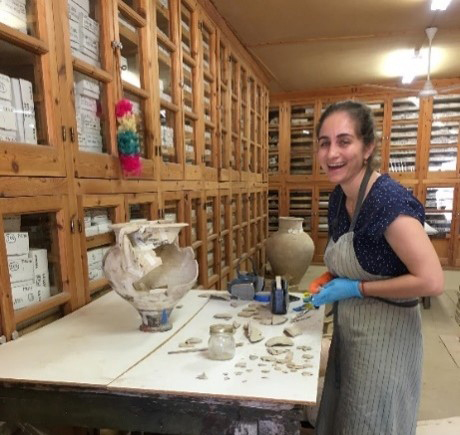 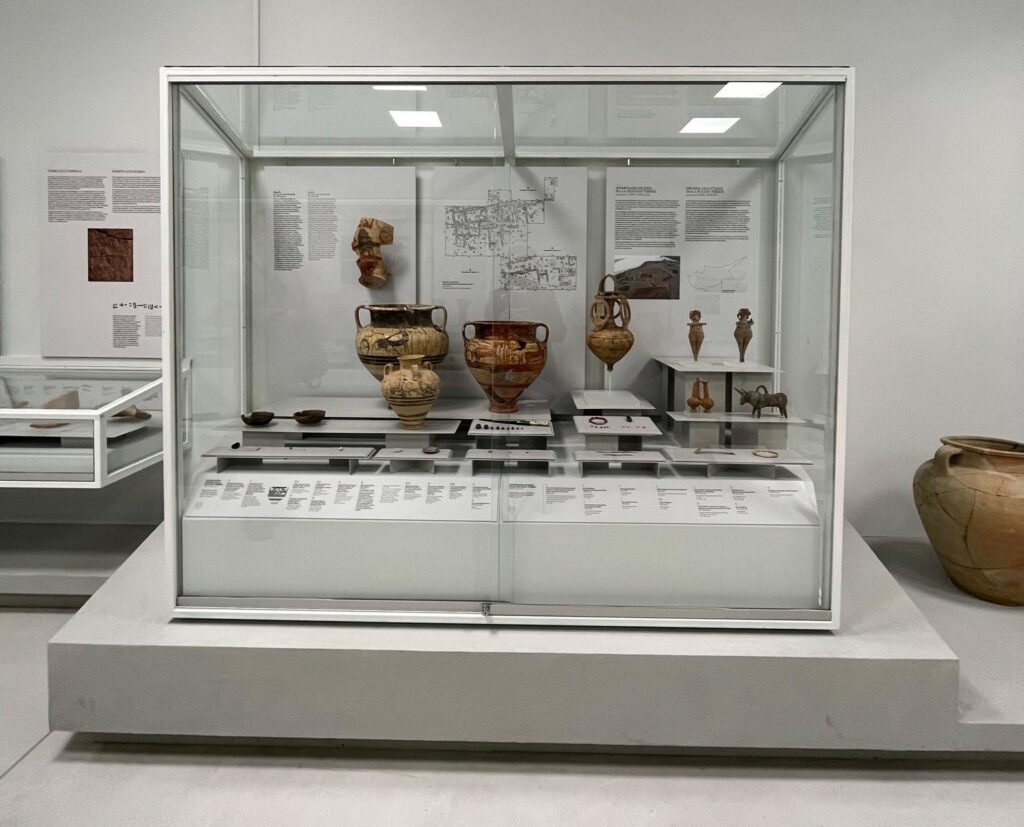 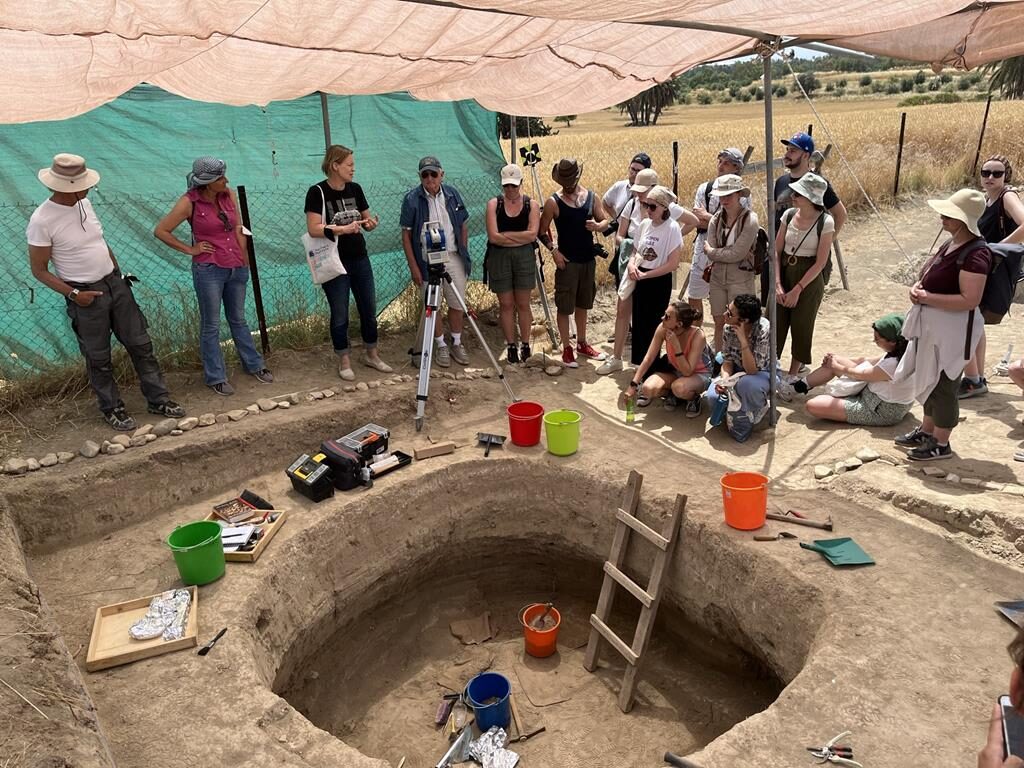 Students of  the University of Vienna under the guidance of M. Luciani  at Tomb TT (at the initial stage of the excavation) 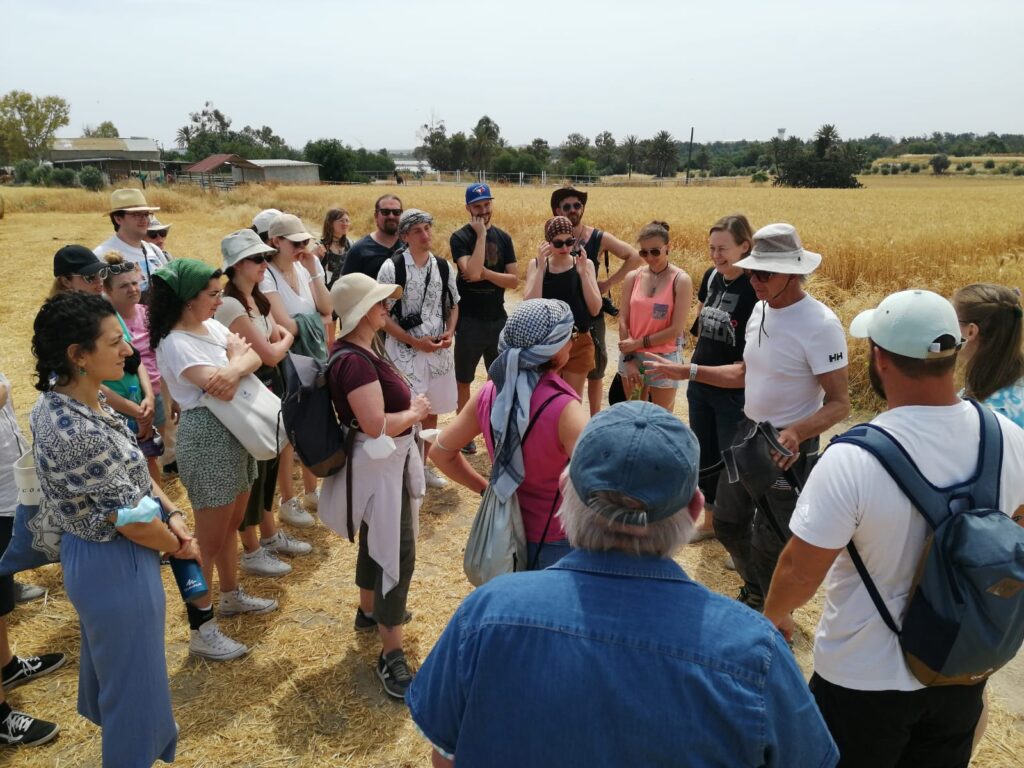 Students of the University of Vienna at City Quarter 4