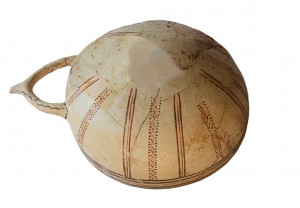 In May and June 2015 the sixth season of the renewed expedition at Hala Sultan Tekke excavations continued in the compound which was exposed in Area 6W in 2013–2014. Further indication of textile production was provided by a substantial heap of crushed murex shells in Stratum 1, i.e. the most recent layer of occupation. 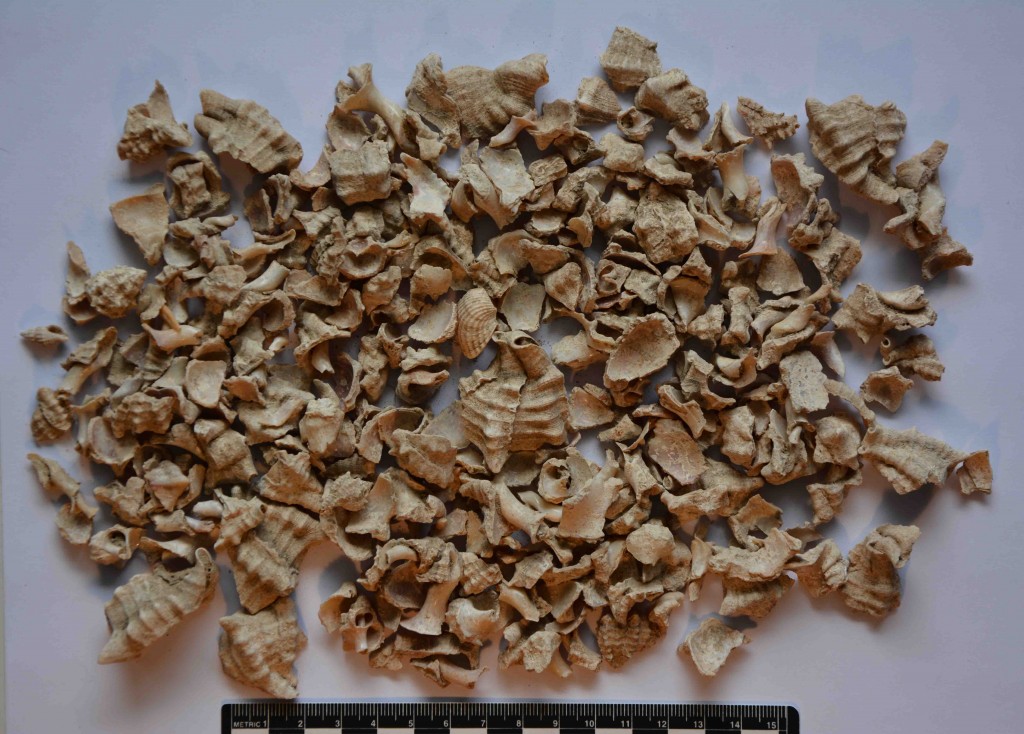 The results of the third ground-penetrating radar (GPR) survey in 2014 indicated another new city quarter west of the former (seasons 2013 and 2014). Excavations were initiated there in 2015 and parts of the remains of a large compound were exposed. 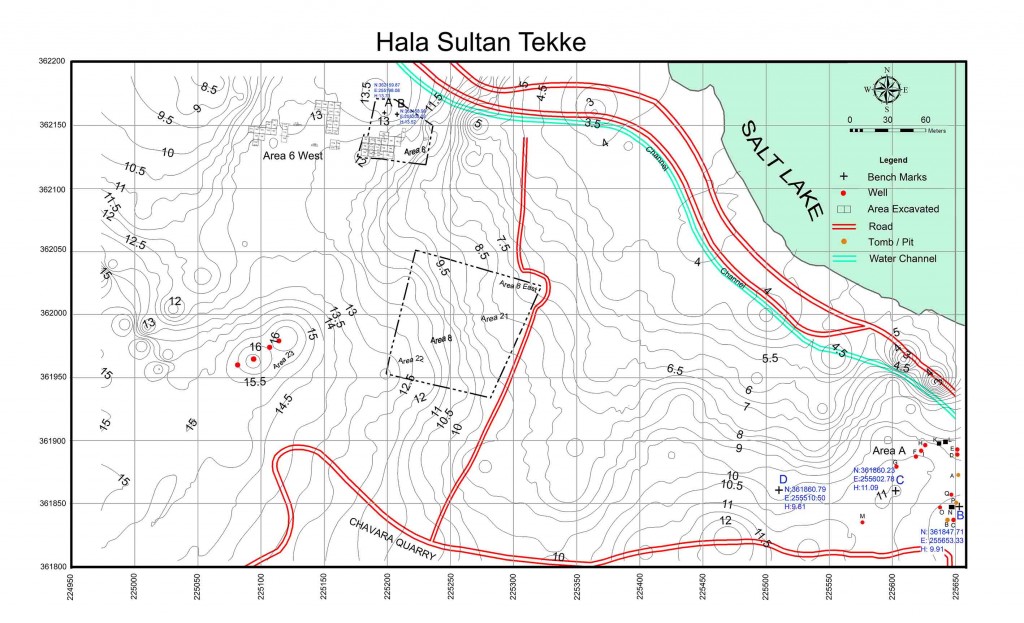 Area6W to the north-west and Area A to the east 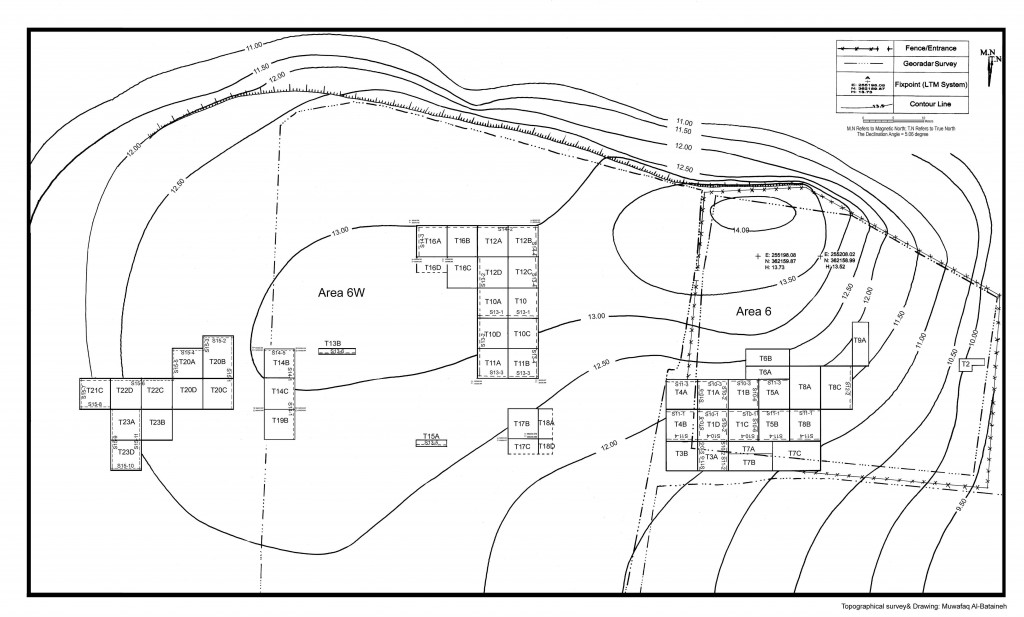 Two occupational phases, Strata 1 and 2, could be determined, both of which were destroyed in a conflagration. One of the most interesting structures from Stratum 1 is a wall which is twice as wide as any of the other walls which belong to domestic and industrial structures. Only a small portion of it has so far been exposed but this wall seems not to be connected to any building and may therefore represent part of a defence system which faces the ancient harbour (Salt Lake). This would make it the first evidence of a defence wall ever discovered at Hala Sultan Tekke. Further exposure to the north and south is planned for 2016.

In general, the architectural remains of Phase 2 are better preserved in this area than those from Stratum 1 which are affected by farming. Stratum 2 yielded a 2.1 m × 2.7 m large basin built of a chalky, dense, material. A suggested function of the basin is the dyeing of textiles. 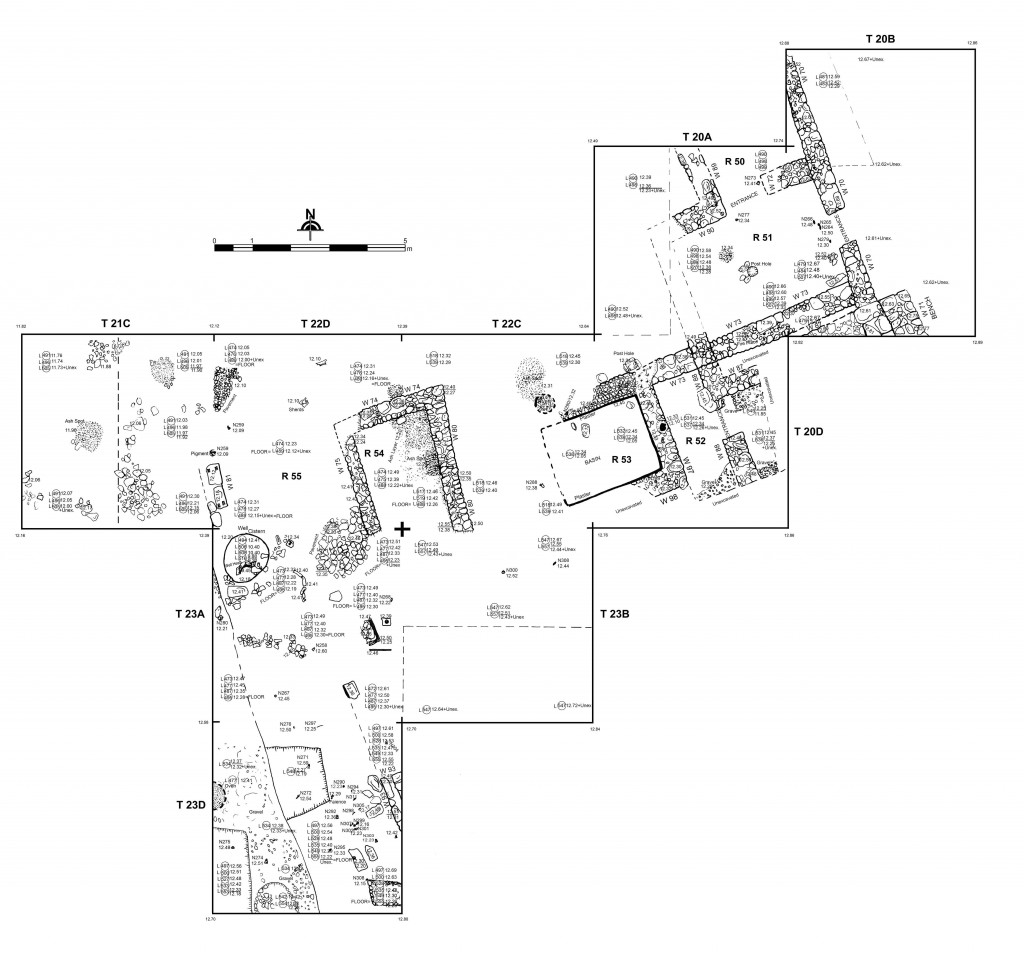 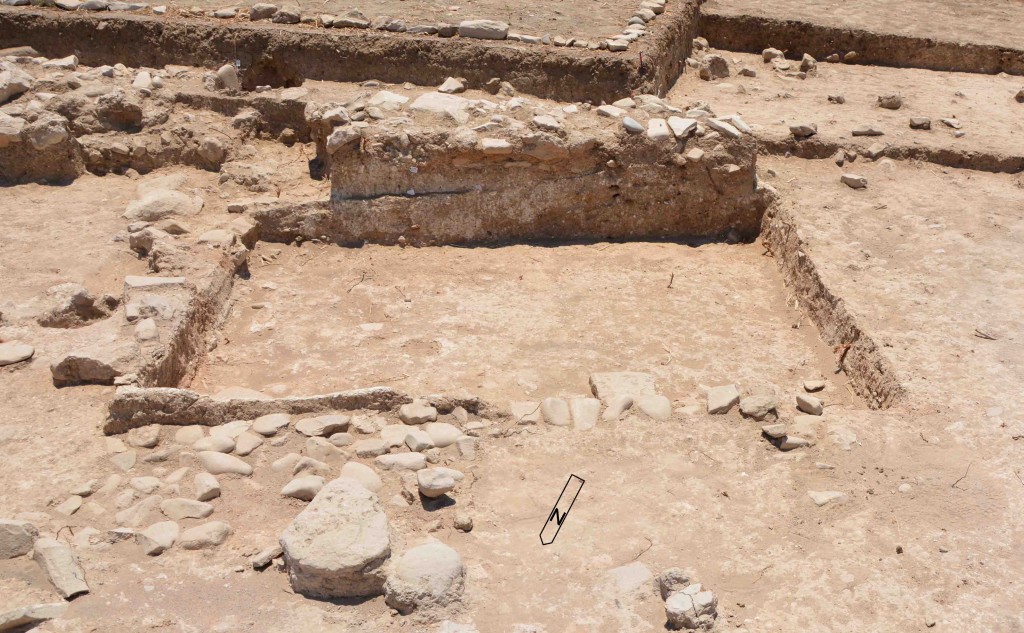 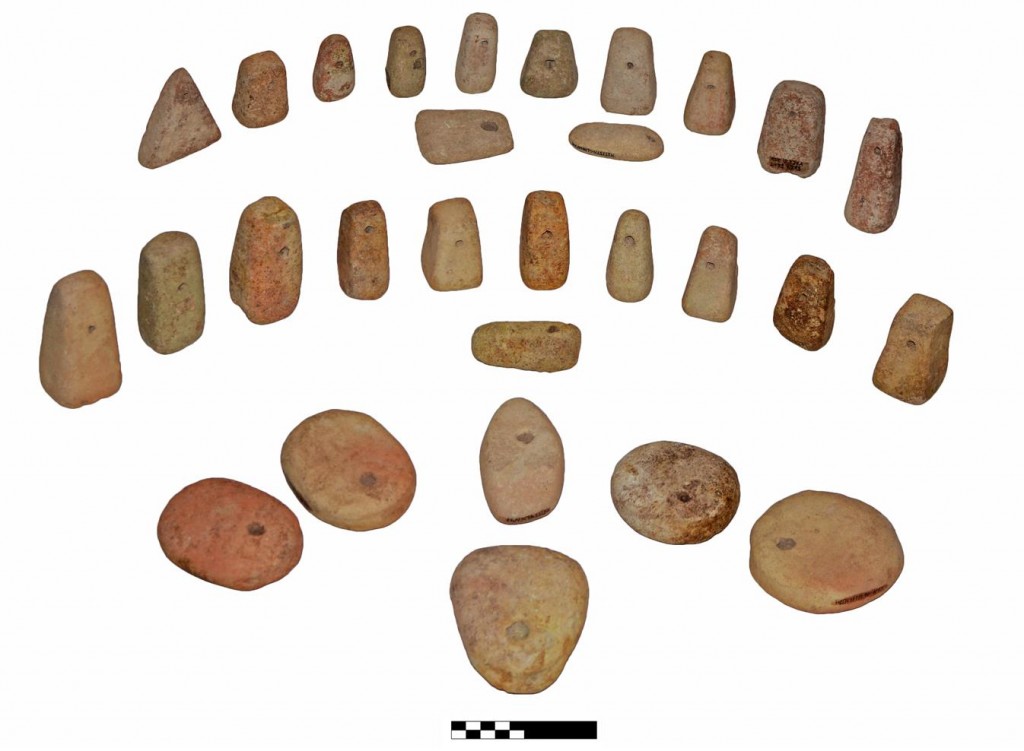 Loom weights from Areas 6W and A

There is a concentration of sling bullets on two spots of Stratum 2: One is in the eastern part of Room 51, in the entrance to the room in W70. The other is to the southwest, in the open space west of W93. They might have been used during an attack.

In addition, the ash layer, which covered large portions of Stratum 2, points to a catastrophic event, most likely a hostile attack.

Further excavations were carried out in Area A, 550 m to the east of Area 6W and close to the mosque of Hala Sultan Tekke. In 2014, more than 80 circular anomalies were indicated by our geomagnetic survey supported by GPR. Twelve of them were excavated in 2015. Some of them turned out to be backfilled wells of which the fills mainly date from the 13th and 12th centuries BC (Late Cypriot IIC–IIIA). One of them contained several White Slip II and Base-ring vessels, loom weights and a 19th Dynasty scarab of white paste. 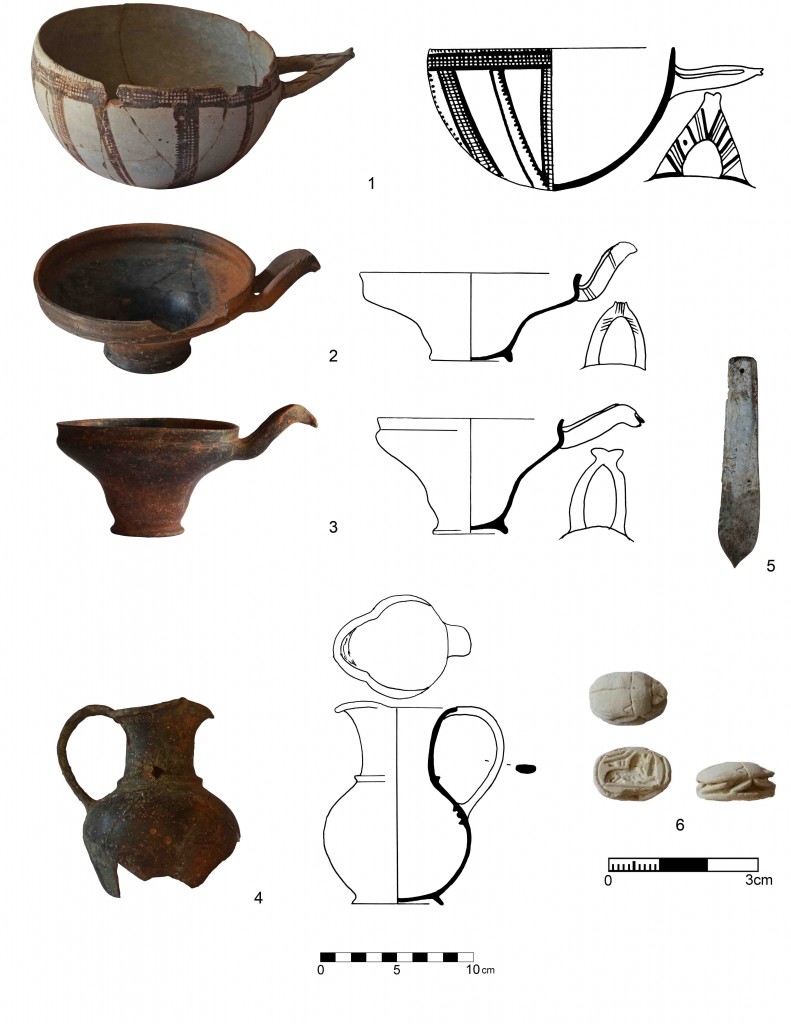 Pottery (White Slip II, Base-ring I and II), scarab (19th Dynasty) and a weaving shuttle of bone from Well F

Another of the excavated anomalies turned out to be an offering pit, the contents of which are similar to that from 2014 (c. 13th century) but considerably older. It contained amongst other finds White Slip I monochrome and bichrome bowls, and Base-ring I bowls, juglets, jugs and a tankard. The preliminary date according to the pottery is roughly the 15th century BC (Late Cypriot IB). 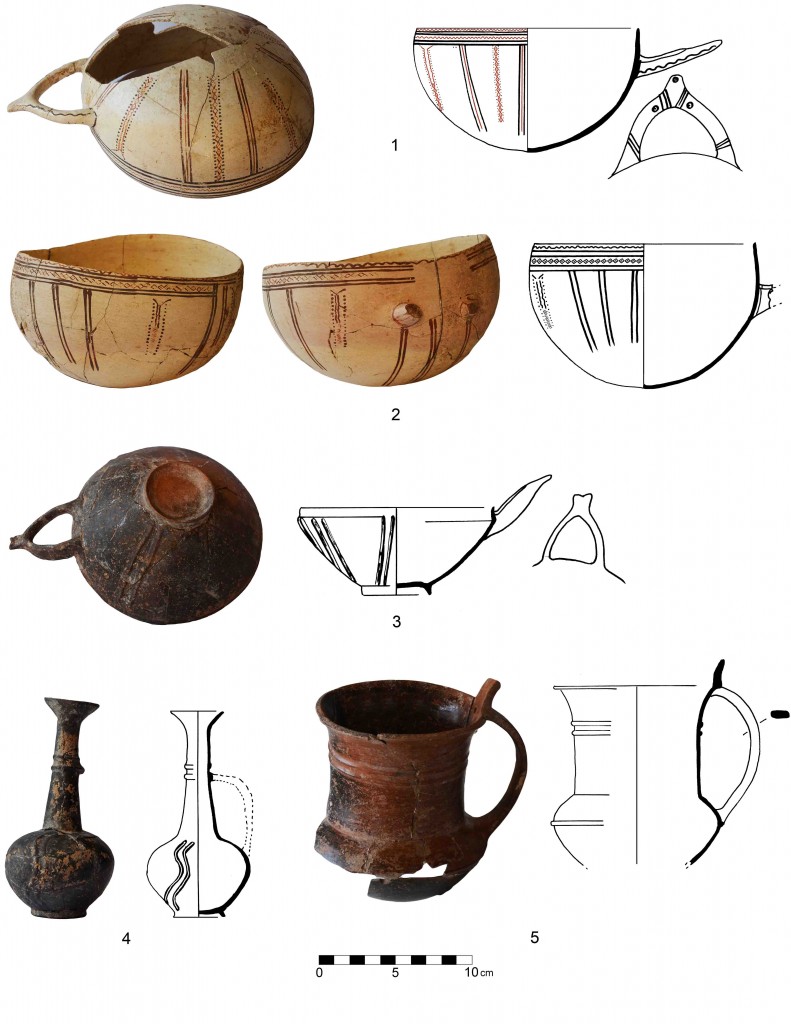 Finds from Offering Pit P: White Slip I bichrome and Base-ring I 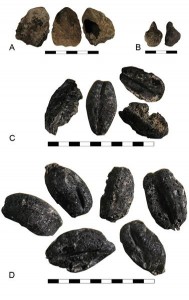 Other activities and visitors in 2015: 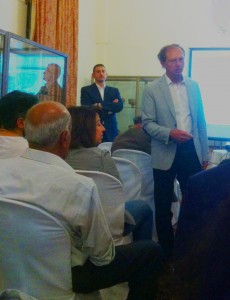 Lecture by Peter M. Fischer in the Pierides Museum, Larnaca. The director of the museum, Peter Ashdjian, in the background 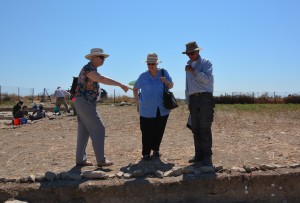 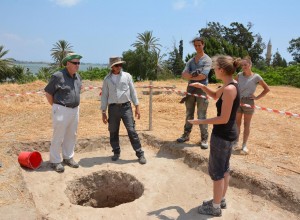 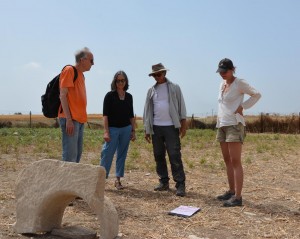 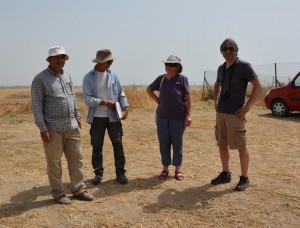