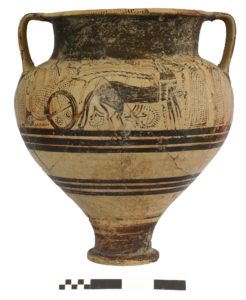 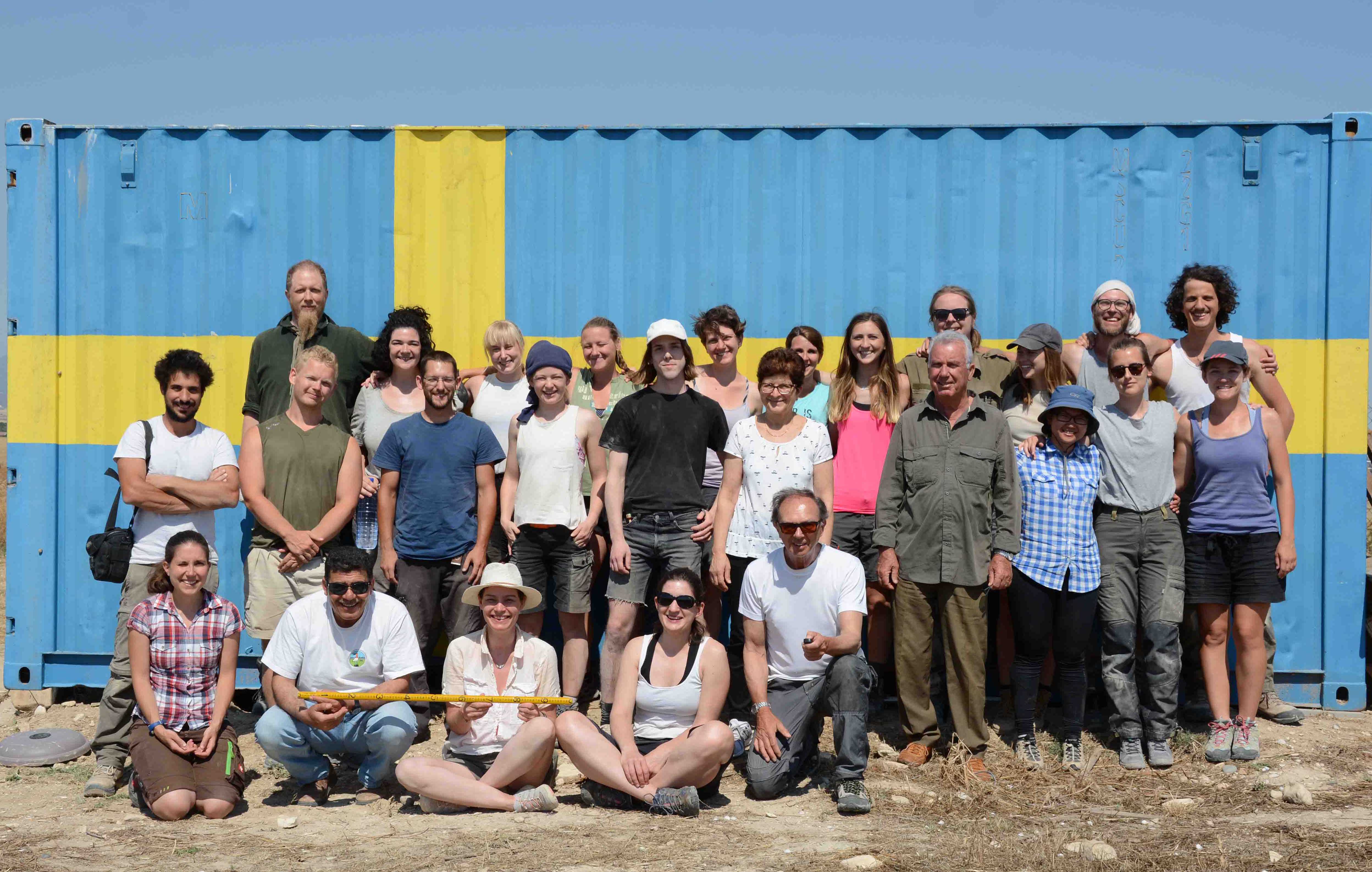 During five weeks in April, May and June 2018, the expedition headed by Professor Peter M. Fischer from the University of Gothenburg, carried out excavations at the Late Cypriot harbour city of Hala Sultan Tekke (Dromolaxia-Vyzakia). The team consisted of 27 students and specialists. Amongst the latter were those trained in anthropology/osteology, botany, conservation, Aegean and Near Eastern ceramics, and geophysical prospecting.

In 2017, the site was surveyed with a magnetometer with multi-sensors mounted on a 5 m wide cart. This arrangement allowed the mapping of 23 hectares within a week, demonstrating stone structures and “pits” down to a depth of roughly 1.5-2 m. The architectural remains point to numerous man-made structures in the entire area of the survey, demonstrating the vast extent of the city. In 2018, 0.6 hectares of the magnetometer-surveyed area were re-investigated with georadar in order to see details of the buried features and to facilitate subsequent excavations. However, the results of the georadar survey were of very limited value: the strong radar attenuation at the site, due to clay-rich soil, did not allow electromagnetic waves to penetrate deeper than a few decimeters from surface. 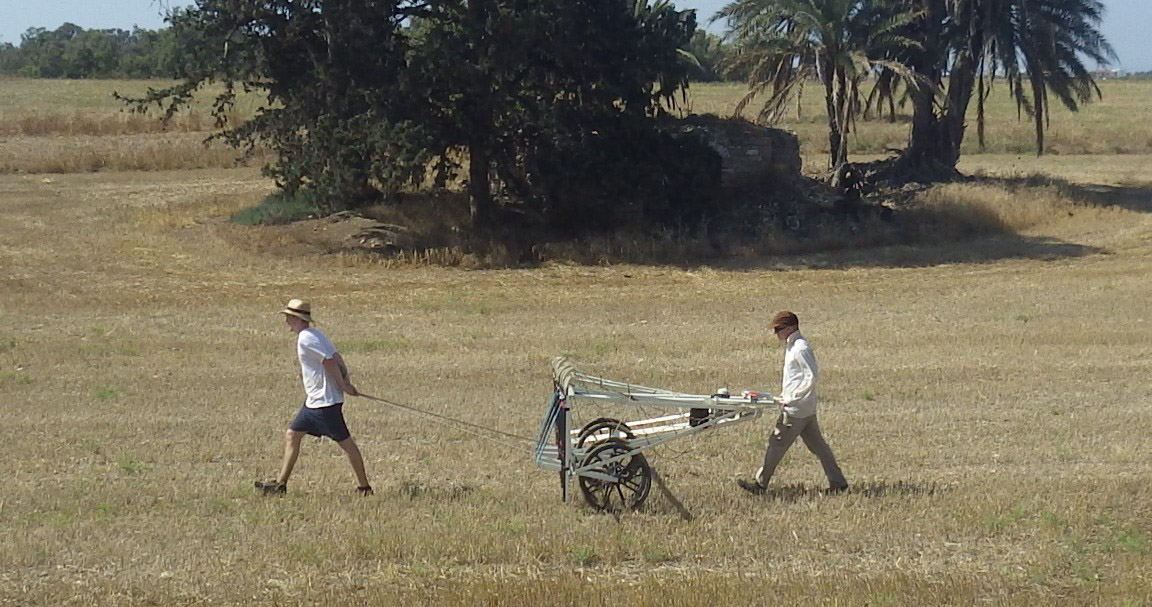 Magnetometer survey with 10 gradiometers by the team of “Eastern Atlas”

This year’s team was divided into three groups: two larger groups excavated in the fenced City Quarter 1 (CQ1), and CQ4 which was discovered by magnetic prospecting and fenced at the end of the season (CQ2 and 3 are also fenced and protected for future research but were not further investigated this year). The third group worked in Area A, just to the west of the mosque of Hala Sultan Tekke, in order to verify the results of the magnetic prospecting: the magnetometer map showed numerous “pits” and a few stone built structures in an area where tombs, offering pits and wells were exposed in the seasons 2014-2017. 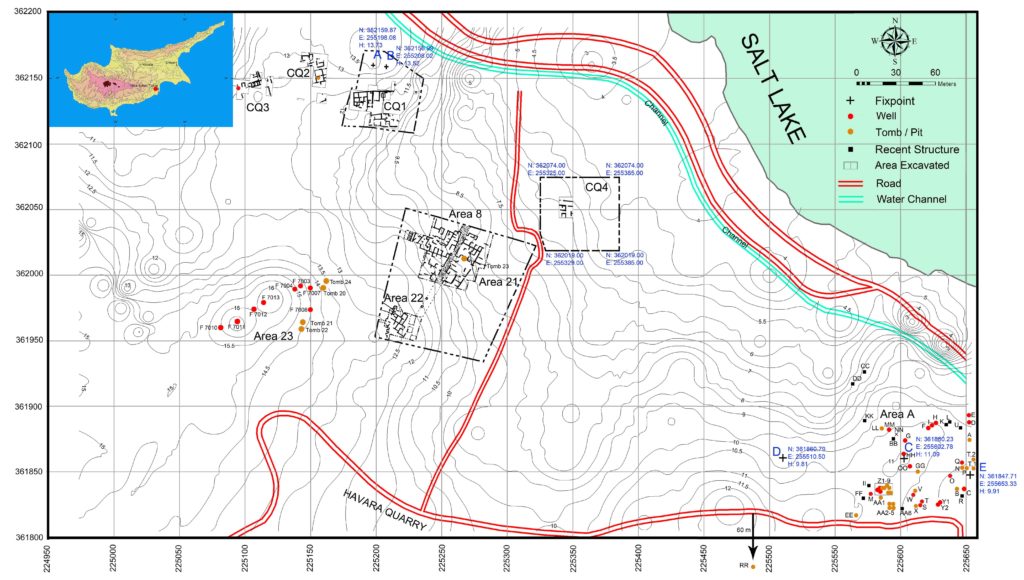 The results from the excavations in CQ1, which began in 2010, verified earlier observations that the nature of this quarter was mainly industrial but also domestic. CQ1 was used during four phases of occupation dating from Late Cypriot (LC) IIC to LC IIIA, i.e. the 13th and first half of the 12th centuries BCE.

There is significant evidence of urban copper production (cf. seasons 2013-2017): three furnaces, tuyères, crucibles and nearly half a ton of slag mixed with copper ore were found in the southern part of CQ1. 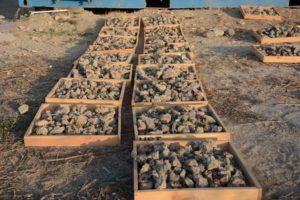 Hundreds of kg of copper slag from CQ1

In addition, purple-dyed textiles were produced there judging by numerous finds of bone beaters, loom weights, spindle whorls and murex shells. Although this part of the city is mainly industrial, much of the pottery (fine wares) and other finds are of surprisingly high quality, indicating the elevated status of the metal and textile workers. 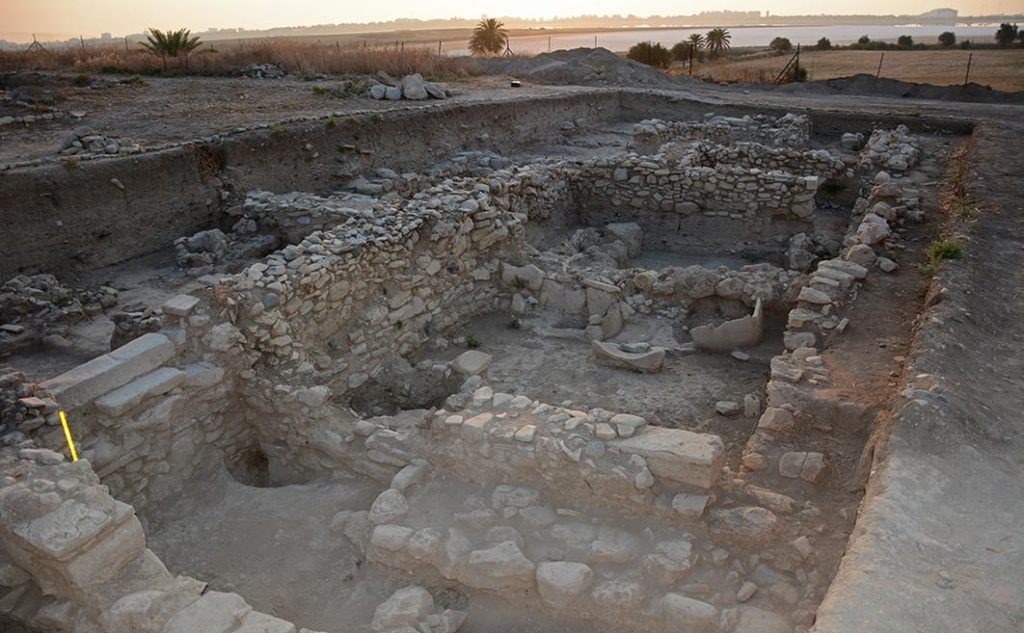 Ivory pommel of dagger from CQ1 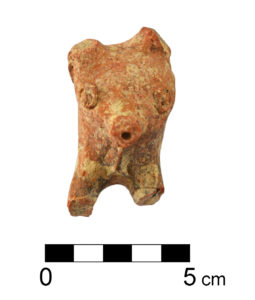 In summary: The main activities in the southern part of CQ1 were the production of copper and to some extent textiles.

This city quarter is between CQ1 and Area A and presents the largest city quarter so far discovered at Hala Sultan Tekke. The magnetometer map shows regularly arranged stone-built compounds of imposing dimensions intersected by streets. Additional prospecting  of CQ4 with georadar did not provide the expected results, i.e. a map showing structures with greater details. 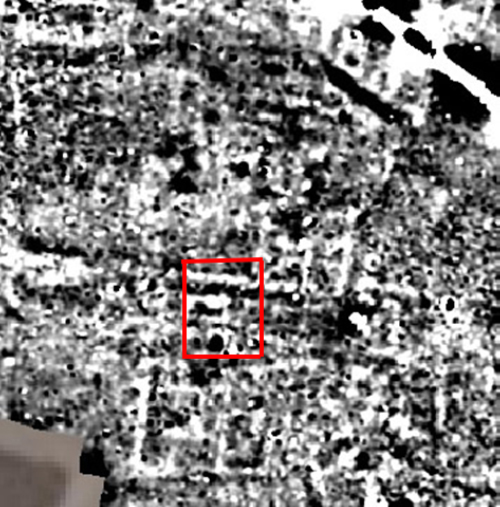 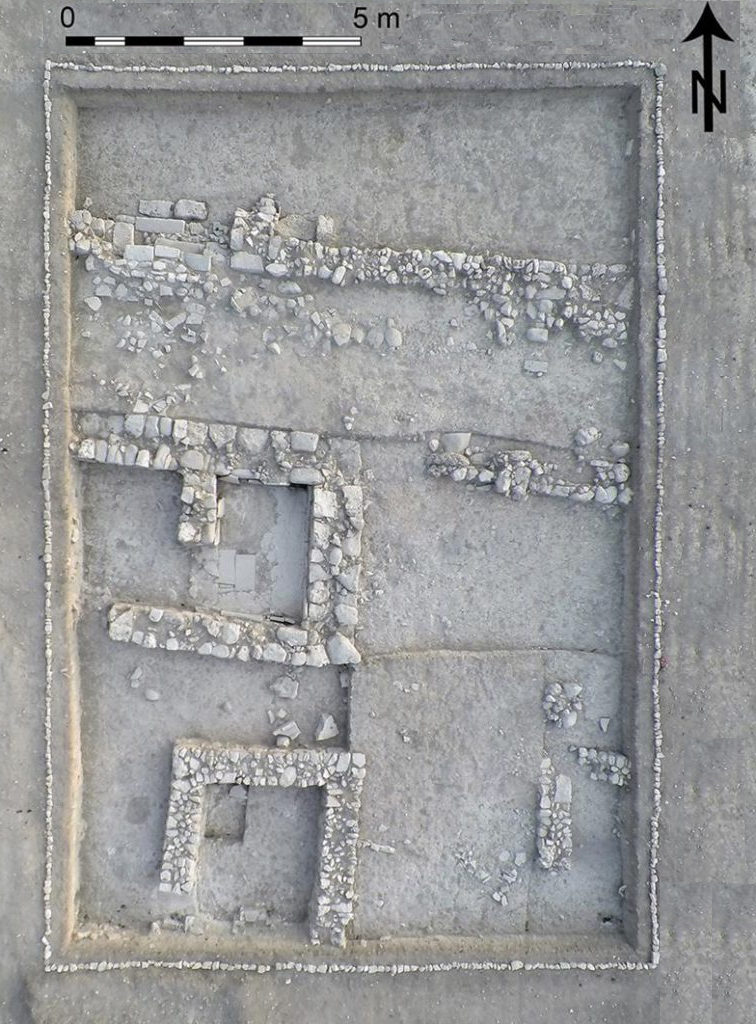 The entire layout resembles that of the town plan of Enkomi. The central part of this city quarter, measuring 65 m x 60 m, was fenced off in order to protect it from continued farming since the most recent structures are just 20 cm below surface (there are, however, equally interesting structures outside the fence). The extremely well-built walls of ashlar blocks distinguish this quarter from CQ1, CQ2, and CQ3, which are of industrial and domestic character. Here, we found a bathroom coated with ashlar blocks (both the walls and the floor) demonstrating an advanced hydro-technical construction: there is a water inlet at the base of the southern wall which is built of ashlar blocks. Opposite is a drain also built of ashlar blocks. The floor, which slopes towards the drain, is partly paved by ashlar blocks together with a thick layer of plaster. Outside the room to the south of the inlet is a water channel which might have served to transport water into the bathroom. 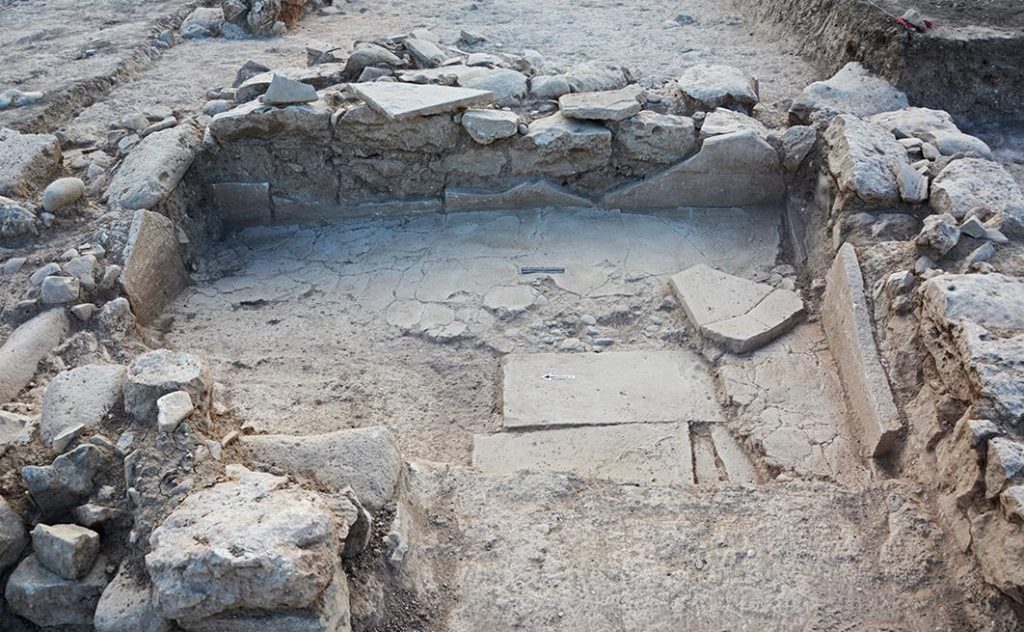 To the north of the bathroom is a corridor, at least 20 m long and three metres wide, which contained numerous pithoi and smaller vessels. This corridor represents a storage area for mainly liquids such as water, wine and olive oil. The storage corridor could be reached from the north via steps built of ashlar blocks. In front of the steps was a double gate, which is indicated by two door sockets. Just to the east of the gate is a stone installation with a thick layer of crushed murex shells (hexaplex trunculus). 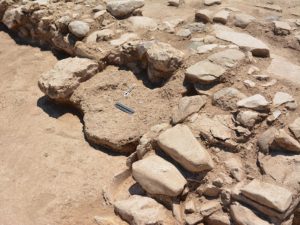 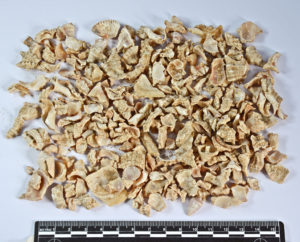 Murex and other shells from CQ4 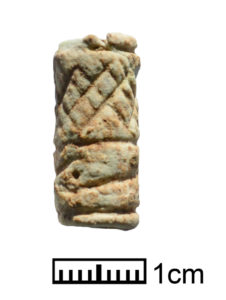 Cylinder seal from bathroom in CQ4 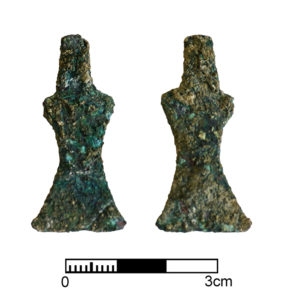 Bronze object (female figurine?) from outside bathroom in CQ4

So far, the expedition could expose only Stratum 1 in a limited area. Nevertheless, burned mudbrick and ash confirmed earlier observations from CQ1-3 that this phase ended in a violent destruction after which the city was abandoned, never to be occupied again.

In summary: The extension of the compounds and the nature of the stone structures in CQ4 give the impression of an administrative area related to trade, maybe the economic centre of the city. The date of the most recent part of the compound is LC IIIA / 12th century BCE.

One of numerous magnetic anomalies, which indicated “pits”, was exposed. It was shown to represent a rich tomb (Tomb RR). The tomb has the shape of a recumbent “8” and contained 13 skeletons. 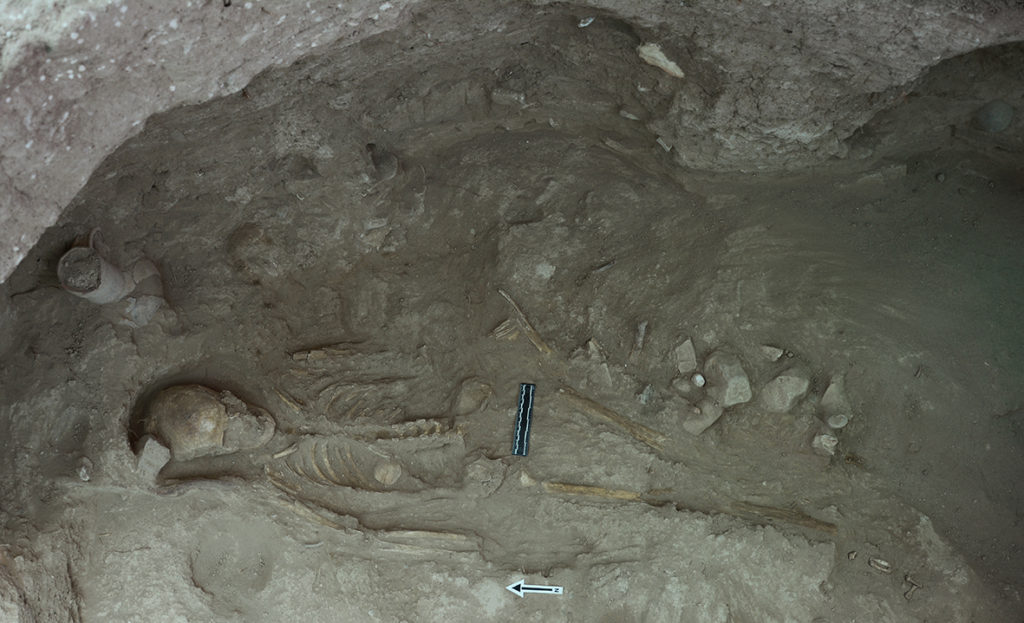 Female, 30-40 years, from Tomb RR (c. 14th century BCE) surrounded by burial gifts; on lower part of right chest is a decorated ivory disc once attached to the shroud and a large Base-ring I jug  to the left (see photographs below)

Finds include plenty of local wares and numerous imports from the Aegean, the Levant and Egypt. Local wares are represented by various vessels of White Slip II (mature), Base-ring I and II and Plain White wheel-made wares. The Late Helladic and Minoan imports comprise pirifrom jars, alabaster, a feeding bottle and juglets. Amongst the most spectacular finds from this season is a large complete chariot krater depicting two chariots drawn by two pairs of horses and 10 individuals of which several bear swords (see logo above).

Egyptian imports include a faience bowl and an alabaster juglet. One of the female skeletons (see above) was buried with two pierced Egyptian (?) ivory discs of which one is incised with a pattern of petals. The ivory disks were part of her dress and were found close to her hips. The tomb is dated to LC IIA-C / LH IIIA-B (roughly 14th century BCE). 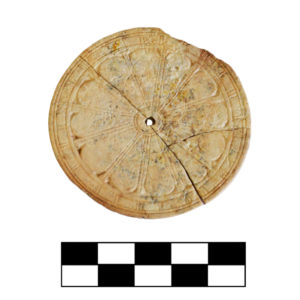 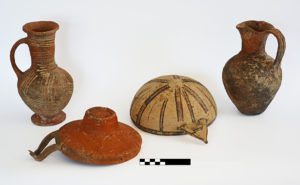 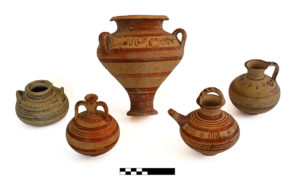 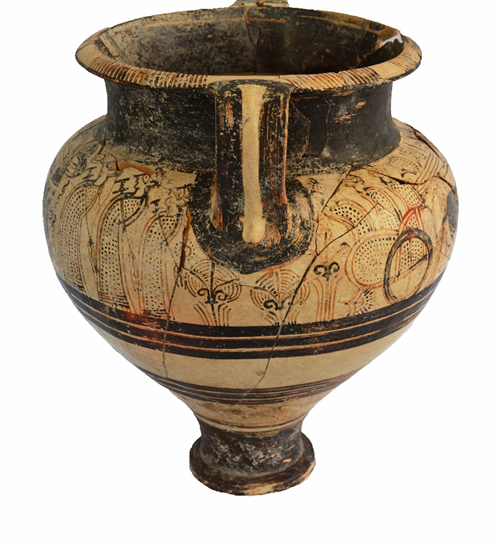 In summary: The wealth of the tombs excavated so far is phenomenal. No other site on the island has revealed so many imported luxury goods from all over the Mediterranean world including the Aegean, Egypt, Syria, Palestine and Mesopotamia. The Mycenaean pictorial style vessels from the past seasons and their local imitations from the 12th century BCE are unique in Cyprus.

For our Swedish-speaking readers: please visit the 45 minutes programme on the excavations at P1, Swedish Broadcasting (P1, Sveriges Radio):
https://sverigesradio.se/sida/avsnitt/1089577?programid=407 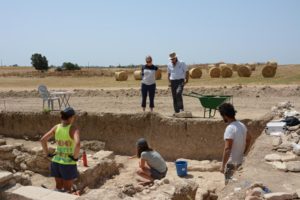 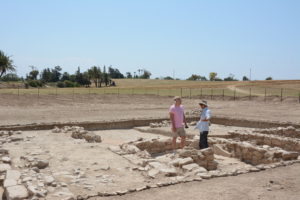 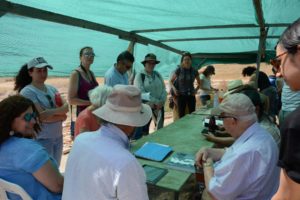 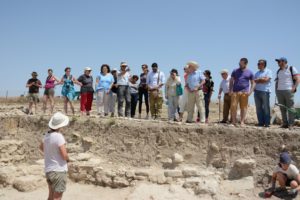 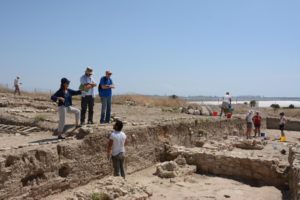