The excavations (May-June 2013) were directed by Professor Peter M. Fischer from the University of Gothenburg, Sweden. The Torsten Söderberg Foundation, Sweden, kindly supported by Dr. Tomas Söderberg, sponsored the project. Most welcome additional resources came from INSTAP and the Royal Society of Arts and Sciences in Gothenburg.

The results from a 1.3 hectare Ground-Penetrating Radar (GPR) survey in June 2012 were confirmed during the May – June 2013 excavations of a limited area (200 sq.m).The GPR survey was carried out by a team from the Ludwig Boltzmann Institute for Archaeological Prospection and Virtual Archaeology (and Archeo Prospections), University of Vienna, headed by I. Trinks. New man-made structures of stone to the west and south of Area 6 were indicated (Fig. 1). The results point to previously unknown city quarters with fairly massive structures of stone. The most striking structures are located in an area extending all the way some 75 m to the west of Area 6, viz. Area 6West; A in Fig. 1). This complex covers some 35 m x 30 m and is located 30–40 m west of Area 6. At the westernmost part of the surveyed area additional structures in the shape of perpendicular stone walls were visible in the GPR-data (B in Fig. 1). The radar data also indicated a 10 m wide band – preliminarily interpreted as a street -, which separates the western city quarter from the larger building complex in Area 6 W (C in Fig. 1). Additional stone-built structures were indicated to the south-east of the fenced Area 6 (D in Fig. 1; excavated 2010-12). 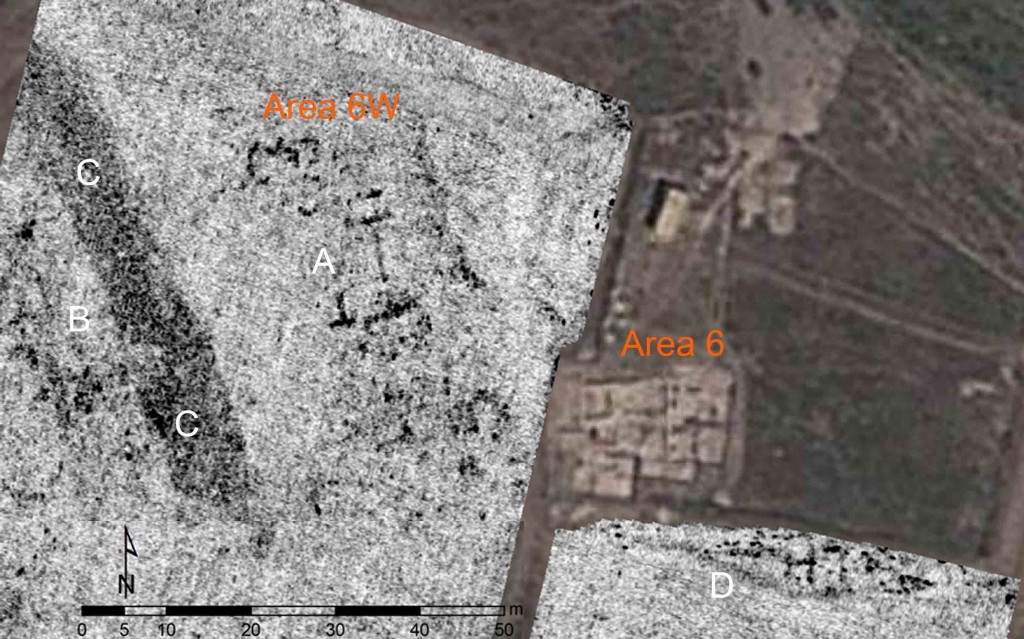 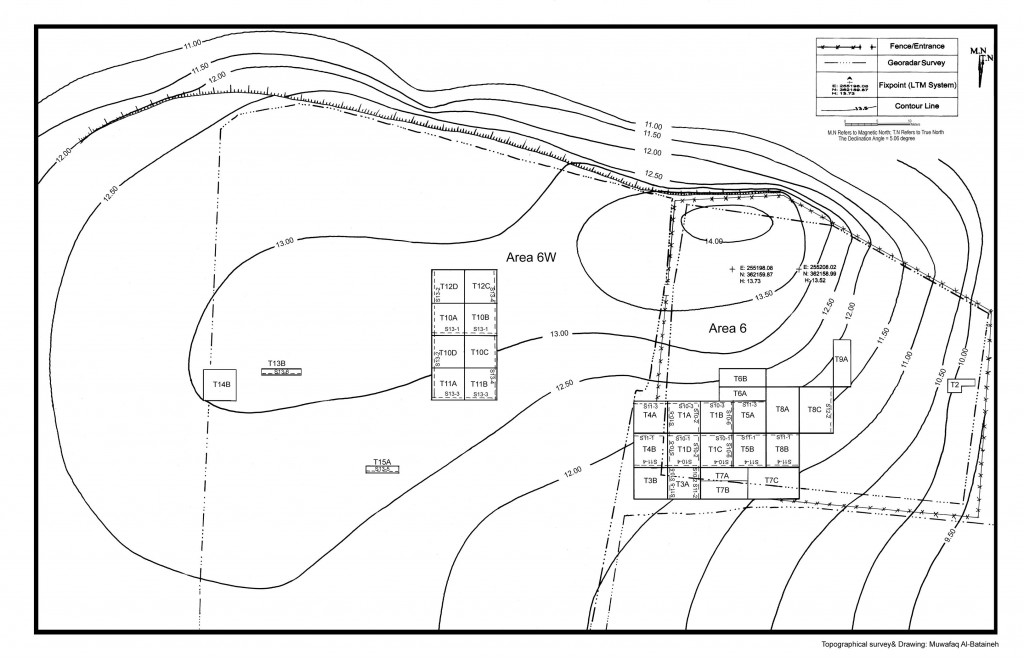 Three phases of occupation were partly exposed. The most recent phase, Stratum 1, contained a northern and a southern compound, both with  living and working facilities, e.g. for spinning, weaving and purple dyeing. 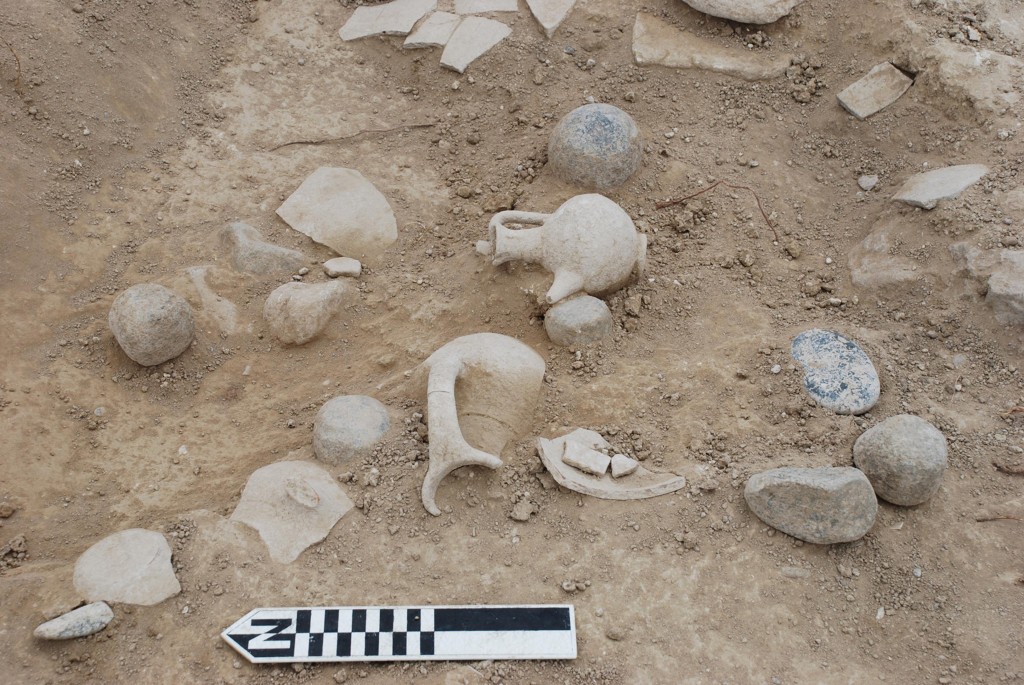 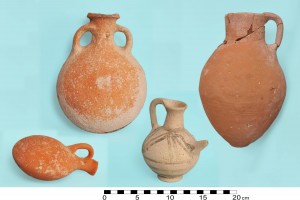 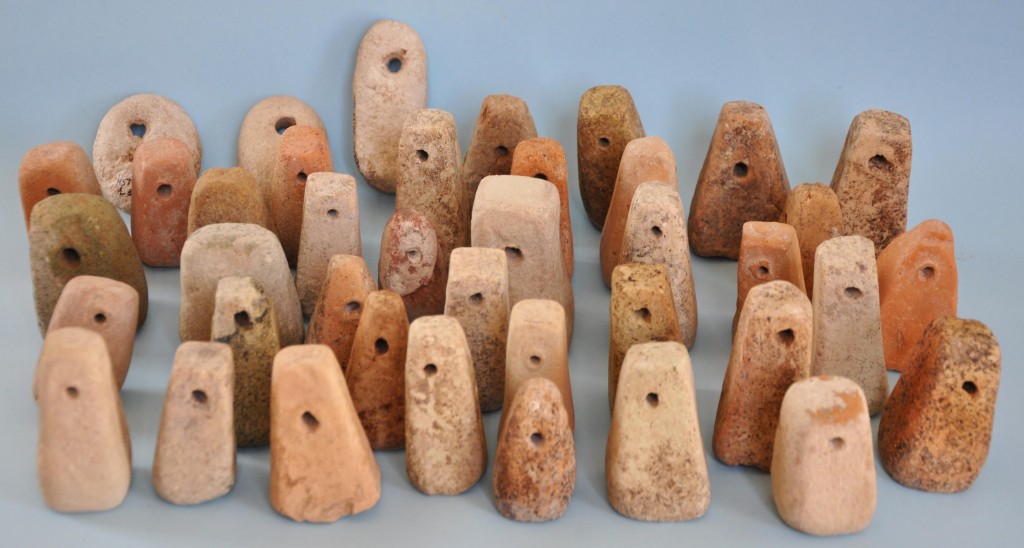 Collection of loom weights of fired clay from 2013 (all Strata) 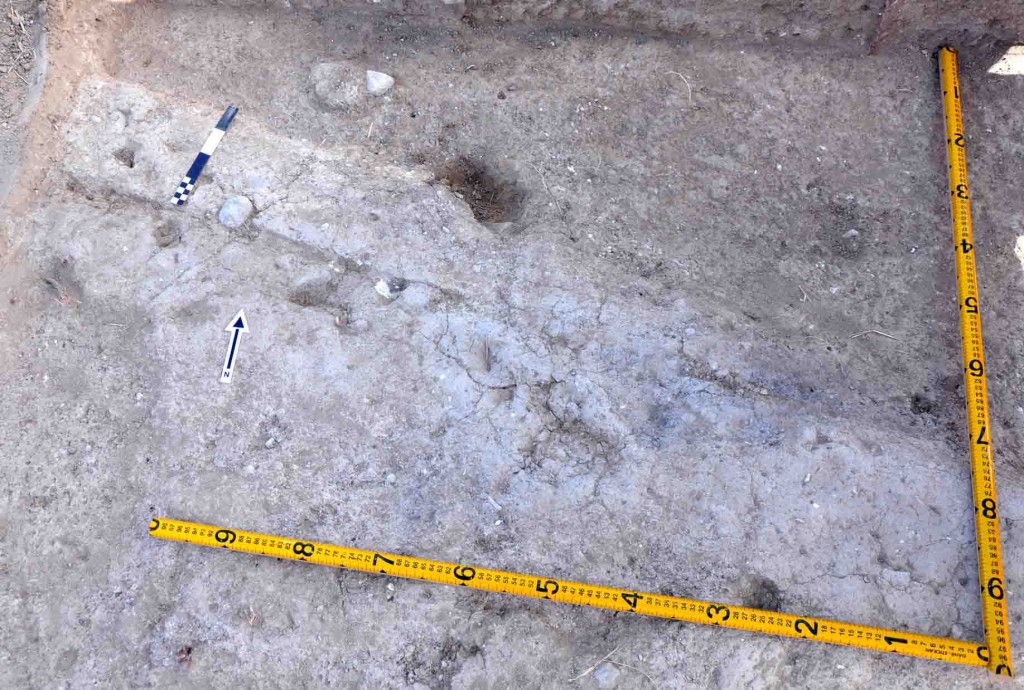 Clay container with remains of purple dye in centre and right

Room 25 (R25) in Stratum 1 produced a Mycenaean-style, bichrome-decorated piriform jar. This vessel shows some characteristics which are not at home in the standard Mycenaean repertoire of vessels. The decorative pattern, which is executed in black and dark red, is untypical. Also, the manufacturing technique differs from “standard” Mycenaean pottery: the fabric is not as fine, and the slip and the bichrome paint is matt. 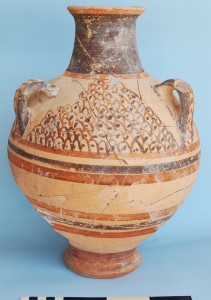 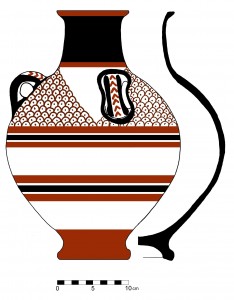 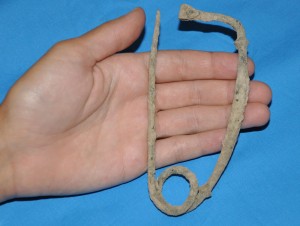 One of the finds from R30 is a complete very large violin bow fibula of bronze. It has been argued that this early type of fibulae is concentrated on the southern and eastern coast of Cyprus. It seems therefore that this object was mainly in use at urban sites connected to the sea trade. This observation supports the assumption that the fibula arrived in Cyprus through contacts with the Aegean and the western Mediterranean, or even central Europe. 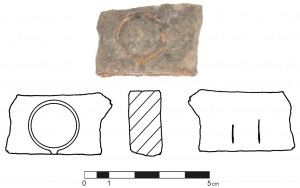 There is an object of stone (steatite?) which is one half of a bivalve mould which was used for casting finger rings.

Stratum 1 is preliminarily dated to the 12th century BCE, i.e. Late Cypriot IIIA. Further exposure of this area will certainly decide whether Stratum 1 in Area 6W is contemporaneous with Stratum 1 in Area 6. At present, there is no stratigraphical connection between the two areas. 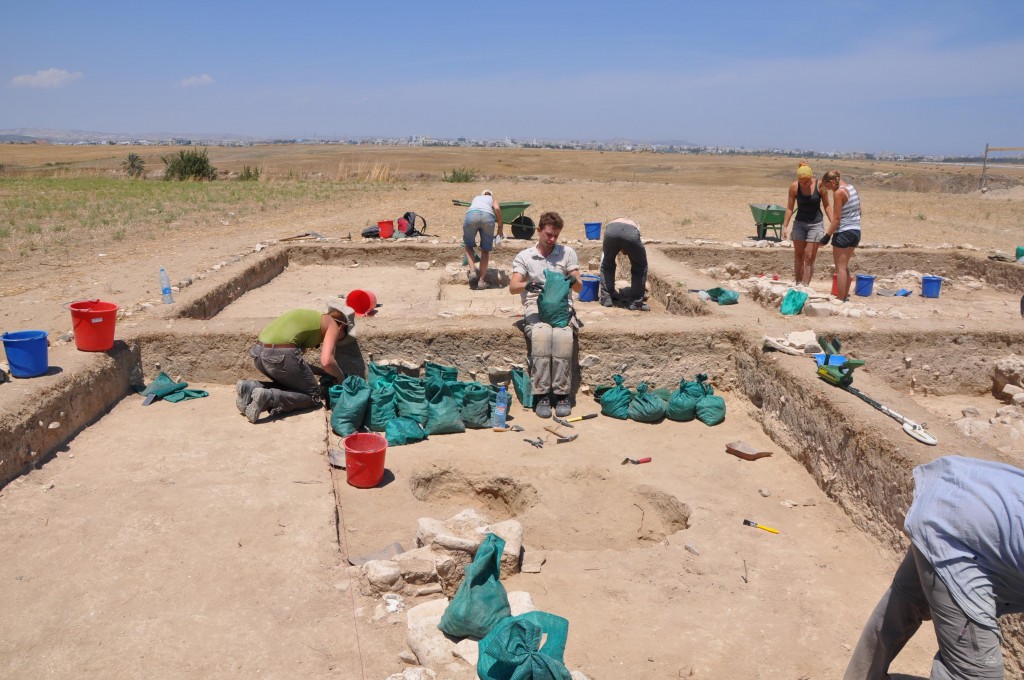 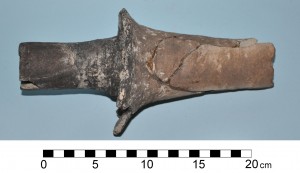 One of the reused tuyères 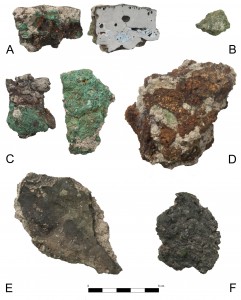 Slag, copper ore, bronze, and parts of a crucible and furnace

The substantial remains from copper-working, which derive from two pits in Area 6 W, are made up of tapped slag, tuyères, copper/bronze fragments and a piece of raw copper. Preliminary investigations by metallographic analysis and scanning electron microscope by M. Mehofer (VIAS, University of Vienna) made it possible to identify various steps of the copper-production process. Tapped slag with copper matte and raw copper with a high amount of iron inclusions were found. It is interesting to note that luxury goods were found close to the copper-working plant. This may lead to the conclusion that people who were engaged in the copper-working process belong to an elevated social class. Another observation: smelting and melting remains were found together in an area which belongs to the settlement and not near the ore deposits which are the predominant location for such activities. 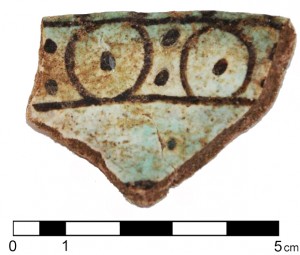 Faience bowl with incised and coloured decoration from Stratum 2

Another of these unique kraters of White Painted Wheel-made Pictorial Style (WPPS) was found in R35. It was termed “Horned God Krater” on account of one of the decorative elements. These kraters may lead to the conclusion that there was a “Hala Sultan Tekke painter”.

At present, the date of Stratum 2 in Area 6W is difficult to assess. There is material which points to a date in the 13th century BCE or even earlier but which may be considered residual. In any case, it seems that Strata 1 and 2 are close in time.

The oldest phase of occupation so far, “Stratum 3”, which is actually a reused and looted tomb, produced two cylinder seals and numerous textile-production-related finds.

From one of the test trenches in the city quarter west of the street derive three figurines (two below).