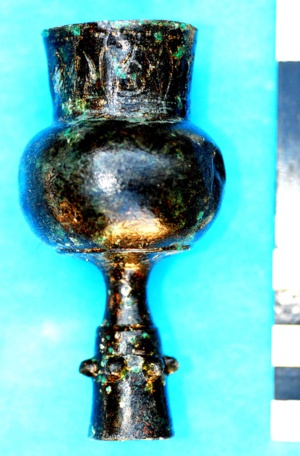 Islamic remains were discovered during previous season especially in Area 7 (the northern part of the settlement) and around the summit of the site. In 2008 – for the first time – more substantial architectural remains which preliminary are ascribed to the Abbasid period were exposed in the eastern part of Area 7. These include a number of spaces which were built against the Islamic city wall directly above and partly disturbing the most recent Iron Age IIC remains. The pottery and other finds will be processed in the near future in order to date the Islamic remains with greater accuracy. However, jugs with turban handles should be mentioned.

There is a find from the Abbasid layer. It is complete and only very slightly dented. The material is of (once gilded) bronze with neatly incised geometric patterns which resemble symbols of playing cards. Various interpretations of the possible function of this object have been forwarded. It may represent a lamp.