Introduction and Aims
The main objectives of the sixteenth season of excavation at the city of Tell Abu al-Kharaz were: additional information on the early Iron Age defence structures in Areas 9 and 10; and the occupational sequence of the hitherto unexplored eastern margins of the city.

The excavations at Tell Abu al-Kharaz, financed by the Royal Swedish Academy of Letters, History and Antiquities, were carried out with the kind support of the Department of Antiquities of Jordan in September and October 2013. The 2013 team included P.M. Fischer from the University of Gothenburg (director), T. Bürge (assistant field director), D. Blattner (assistant), H. Ta’ani (foreman, trench master) and M. Al-Bataineh (surveyor, draughtsperson). Trench masters were R. Árnadóttir, D. Kofel, A. Lindqvist and B. Stolle. The representative of the Department of Antiquities was M. Es-Shalabi. Additional support was provided by S. Esbeihat (cook), Y. Suleiman Musa (pottery washing) and M. Mohammed Ahmad (transport). Nine local workers from Pella, Mashare‘a and Yabis were engaged in the excavations. The Royal Court of Jordan, represented by T.R.H.s Prince Raad Ibn Zaid and Princess Majda Raad showed – as always – sincere interest in the project and visited the excavations. 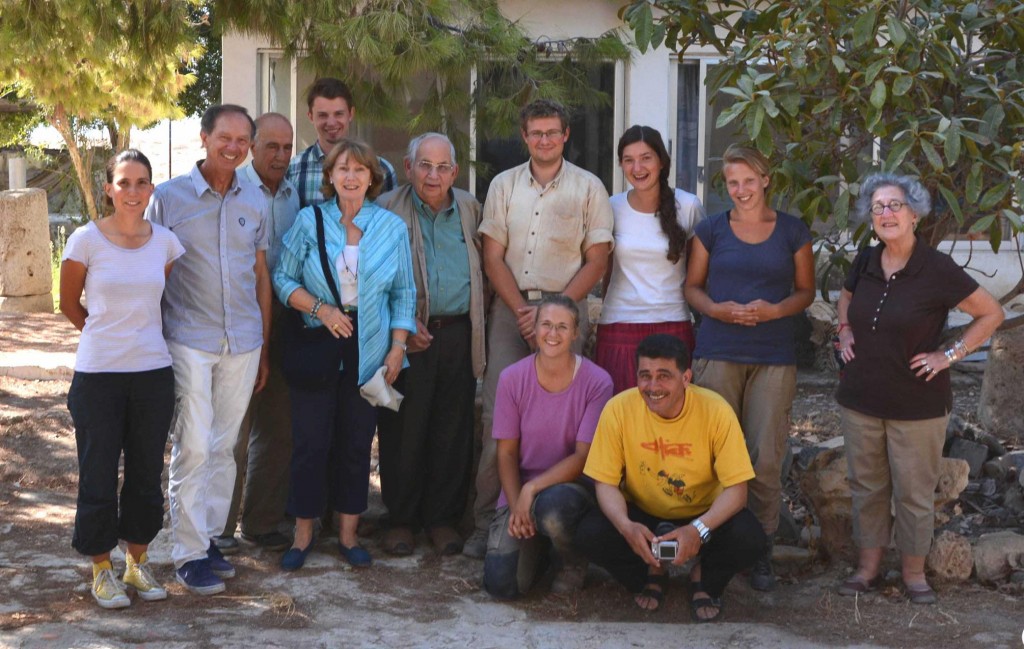 Other visitors came from the Swedish Embassy in Amman, headed by the recently appointed ambassador Helena Gröndahl Rietz. 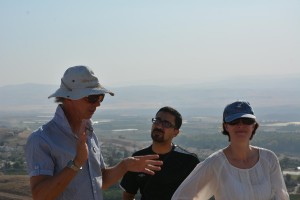 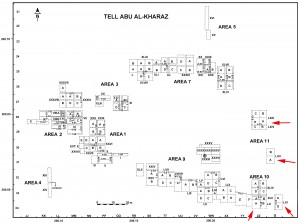 The areas of excavations / test trenches can be seen in the drawing to the left .

It was indeed interesting to find out that, around 1100 BCE, the settlers of Phase IX in Area 9 cut through the entire Early Bronze Age II defence system from c. 3000 BCE and deposited the foundation walls of their substantial two-storey compound on top of the Early Bronze Age II stone-built city wall. 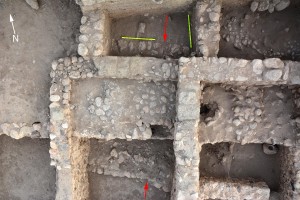 As well as gaining easily accessible building material the people of Phase IX were also able to use a stable surface on which they built their structures. Although originally constructed 2000 years earlier the Early Bronze Age II glacis, which was reinforced with perpendicular walls – its section being 6 m long and 3 m high – was kept largely as it was designed around 3000 BCE and became an integrated part of the Iron Age defence system. Excavations to the north-east of the Phase IX compound exposed remains from the Islamic/Abbasid, Byzantine and late Roman periods together with Iron Age structures from Phases XI and X, viz. 1050-930 BCE. There were, however, no additional Phase IX structures, which were obviously removed in later periods.
At the south-easternmost corner of the upper plateau of the tell an opening in the Early Bronze Age II glacis represents a city gate (Area 10). The gate is conveniently located at a spot which is closest to the Wadi al-Yabis, the most important water resource for the people of Tell Abu al-Kharaz during all periods, and it is to be expected that the road to the Wadi al-Yabis started here. 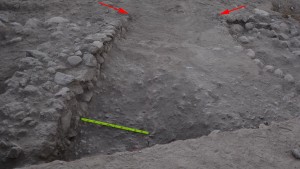 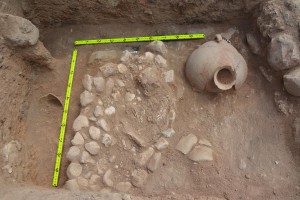 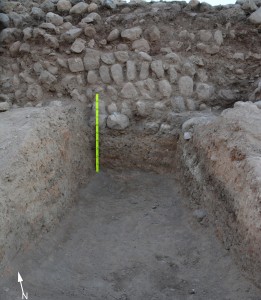 Test trenches were opened in Area 11, the objectives of which were to explore the easternmost part of the city. These trenches were quite rewarding, considering the small exposed area. Remains from Islamic/Abbasid, late Roman, Iron Age and Late Bronze Age were found.

Islamic structures from around 900 CE are domestic in nature. The late Roman structure from c. 300 CE is preliminarily interpreted as a burial place, where three skeletons without tomb gifts were found. 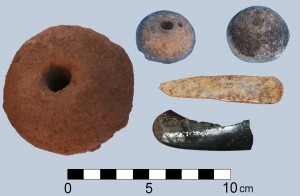 The Iron Age in these test trenches is represented by Phases XIV (770-732 BCE) and XIII (800-770 BCE). There are numerous finds which are related to textile production.  From Phase XIV is a four-room house with some extraordinary finds: one is an elaborate cosmetic palette of limestone with geometric incisions, and another an iron dagger. 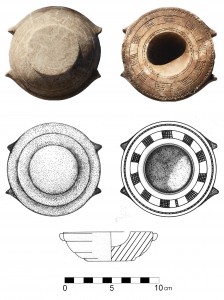 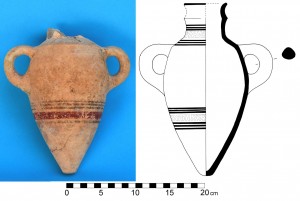 Phase XIII produced a vessel of high quality which so far is unique at the site: it is bichrome-decorated in red and black and has fairly large vertical handles and a pointed base. Our preliminary search for good parallels has not been successful so far but we definitely consider this vessel an import. Another find from Phase XIII is a pierced stamp of limestone with an incised “sign” which it has not been possible to decipher so far.

At the very end of the season of 2013 a test trench was dug between some of the Phase XIII walls just below a stone pavement from this phase. It seems that all Iron Age phases from XII-IX and the Late Bronze Age Phases VIII-VI are missing because we hit directly a well-preserved domestic context from Phase V (1525-1450 BCE) which corresponds to the beginning of the Late Bronze Age at Tell Abu al-Kharaz. 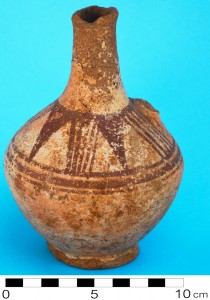 The context contained several complete finds, amongst them being a Chocolate-on-White Ware juglet with a thick white burnished slip and the typical abstract tree motif included in a metope decoration in chocolate-brown colour, a frying pan and a cooking pot and other objects. All finds were embedded in a substantial destruction layer, which confirms our earlier observation that Phase V was destroyed by a severe conflagration that obviously affected the entire city: the same situation was found, for instance, in the westernmost exposed part of the tell, namely in Area 2 which is approximately 150 m to the west of Area 11. 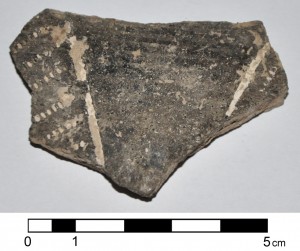 For the first time ever the presence of people at Tell Abu al-Kharaz in MB II, viz. roughly 18/17th century BCE,  is ascertained by the shoulder sherd of a large jug of Tell el-Yahudiyeh ware (thankfully identified by M. Bietak).

One could assume after 16 seasons of excavations that, in principle, the entire occupational sequence of Tell Abu al-Kharaz and the typology of finds would be well established. Nevertheless, the latest four seasons of excavations brought to light new evidence by early Tell el-Yahudiyeh ware on the presence of people at the site in the MB II (18/17th century BCE), the beginning of the Iron Age (12/11th century BCE), and the historical periods following the Iron Age, … and some unique finds which on the one hand are exciting but on the other hand by their very uniqueness present certain problems in finding parallels … 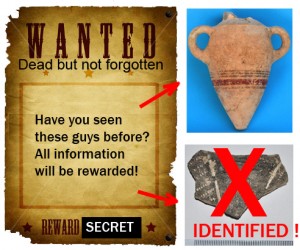