During May–June 2021, when in Cyprus the Covid-19 situation improved, an excavation campaign could be carried out under the direction of Peter M. Fischer and Teresa Bürge, both from the Department of Historical Studies, University of Gothenburg, Sweden. Compared to regular seasons, the number of participants had to be reduced in order to follow the regulations of the Cypriot health authorities.

Since the reduced size of the team was not sufficient for field work in the city (see City Quarter 1 in the 2019 website), excavations with parts of the team continued in Area A, the city’s cemetery, which has been and still is much endangered by modern activities, especially farming. Other team members processed material from previous seasons in the store rooms of the Terra Umbra near the Larnaca Museum.

Excavations concentrated on the final exposure of Tomb RR (see websites 2018–2020) and the continued excavation of Tomb SS which began in 2020 (see website 2020). The two tombs are just 1-2 m apart in an area which was fenced by the expedition in 2018.

The Swedish team was thankfully supported by Kirsi Lorentz and Sorin Hermon and their staff from the Cyprus Institute (see: https://face2face.cyi.ac.cy/news).

Team spring 2021 at the residency of the Swedish ambassador, Anders Hagelberg (centre with Lena Hagelberg)

Tomb RR, which is figure-of-eight-shaped with two underground chambers, measures 3.5 by 2.5 m in total. This tomb has been the focus of our excavations for the past seasons. After four campaigns and extremely careful excavation procedures including much sampling, Tomb RR was completely excavated. The tomb contained the remains of 137 individuals (MNI), some represented as complete and articulated skeletons, but most of them comprising mixed together bones of all age categories from infants to mature adults. Tomb RR (and the adjacent Chamber Tomb SS) preserved indications of ritual activities involving fire.

Due to the large number of individuals, age and sex statistics, reports on pathological and other finds, and aDNA and Strontium isotope analyses, have to await the outcomes of our ongoing investigations (see also Tomb SS).

Selected other finds from Tomb RR

Four intact female figurines with bird heads are of Base-ring ware and differing shapes. One of them holds a child who resembles a small bird (see fig. below right). Objects of ivory include several spindle whorls, decorated distaffs and a comb. There is also jewellery of various metals. The tomb produced another three scarabs of enstatite (1) and composition (2), and a stamp seal of steatite or serpentine. All can be dated to approximately the 14th century BCE which is in excellent accordance with the ceramic evidence. From the same tomb are five cylinder seals of haematite, steatite and chlorite, one of them of magnetic haematite from Mesopotamia and the others from Cyprus / Northern Levant. 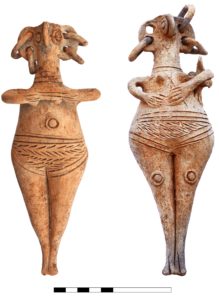 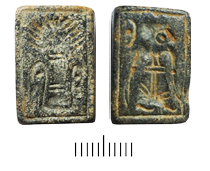 Just 2 m south of Tomb RR lies this tomb which displays striking differences. Tomb SS has a single, large, pentagonal underground chamber covering 4.5 by 4 m. The chamber reminds an underground cupola which on the inside is covered with a thick layer of a white plaster-like substance that stabilizes the structure. The tomb held 11 skeletons (MNI), most of them articulated. As in Tomb RR, all age categories are represented. Here, too, indications of ritual activities involving fire were recorded. In the central part of the tomb, large containers with drinking and eating vessels point to feasting in memory of the deceased. 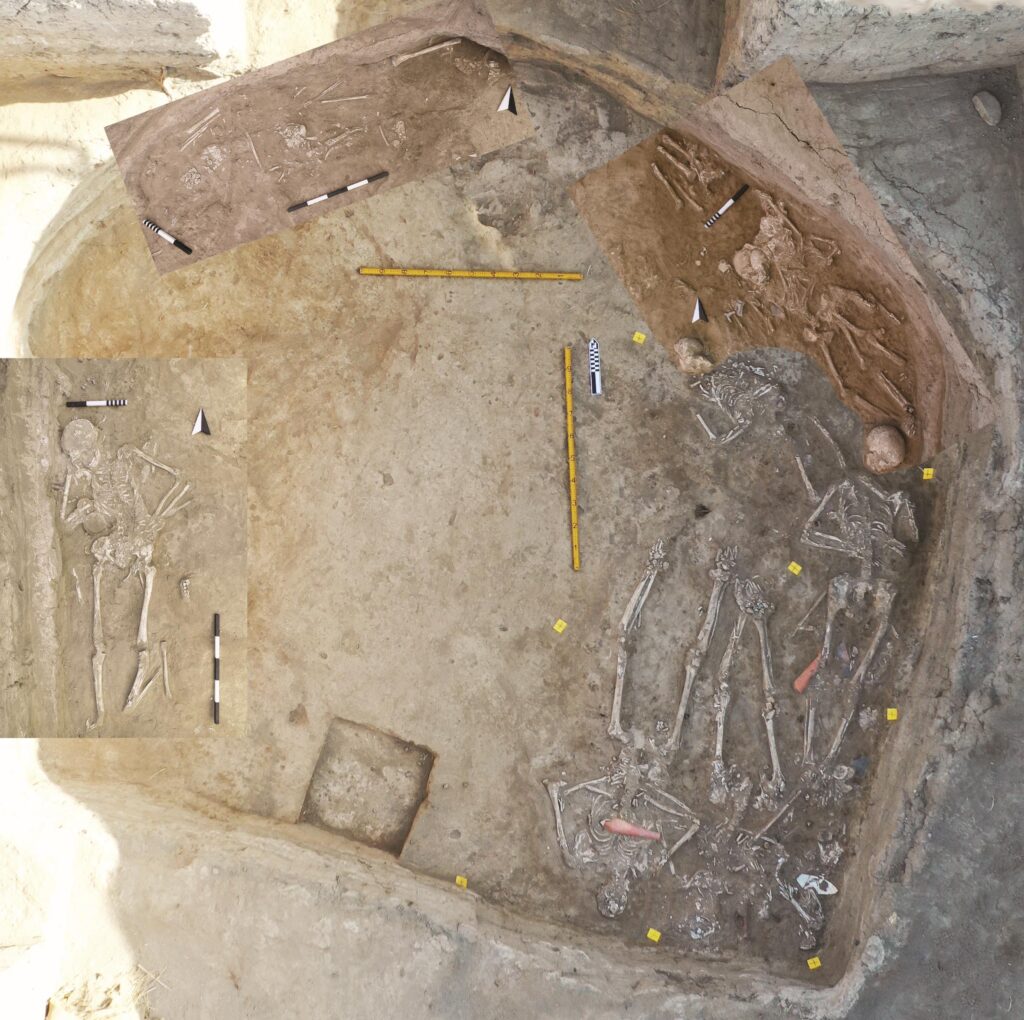 Selected other finds from Tomb SS

An intact bovine vessel (rhyton) of Base-ring II, a cylinder seals of haematite, an ivory distaff and jewellery of various metals should be mentioned. 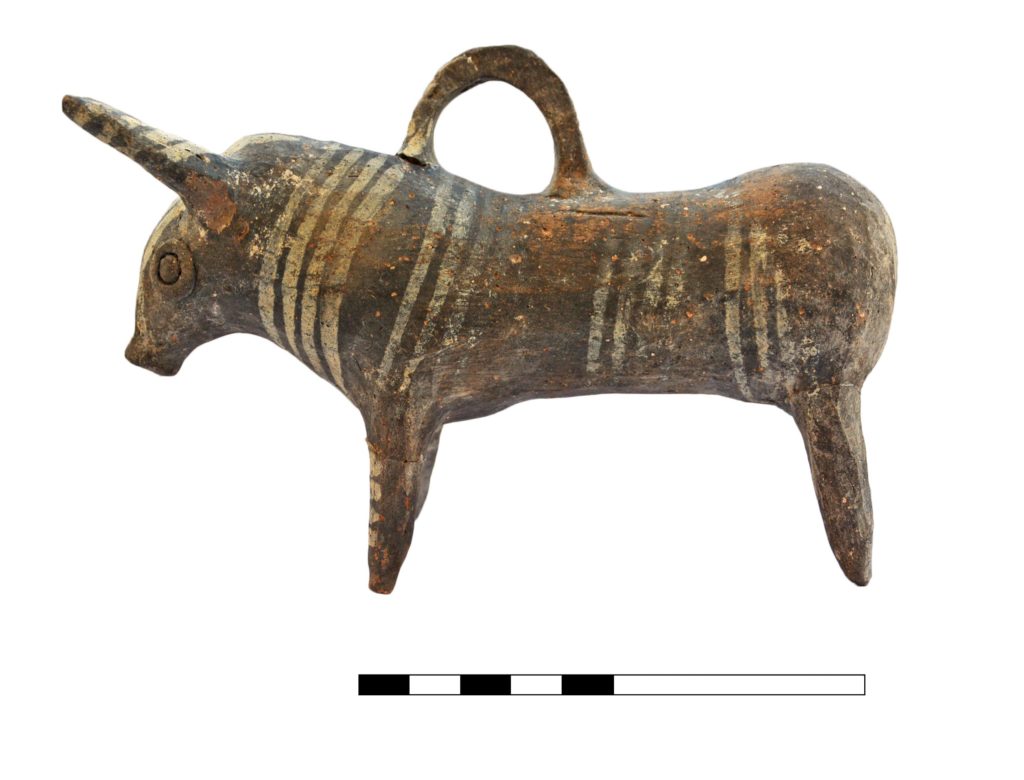 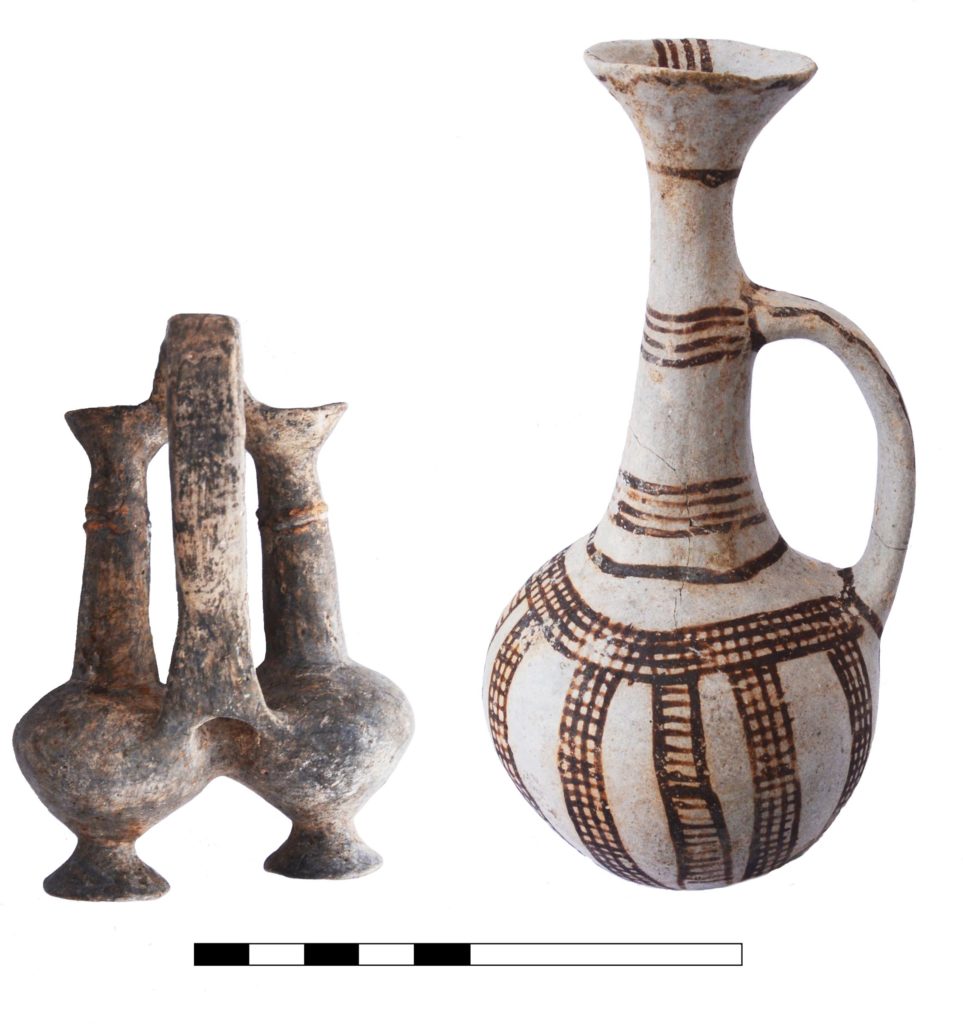 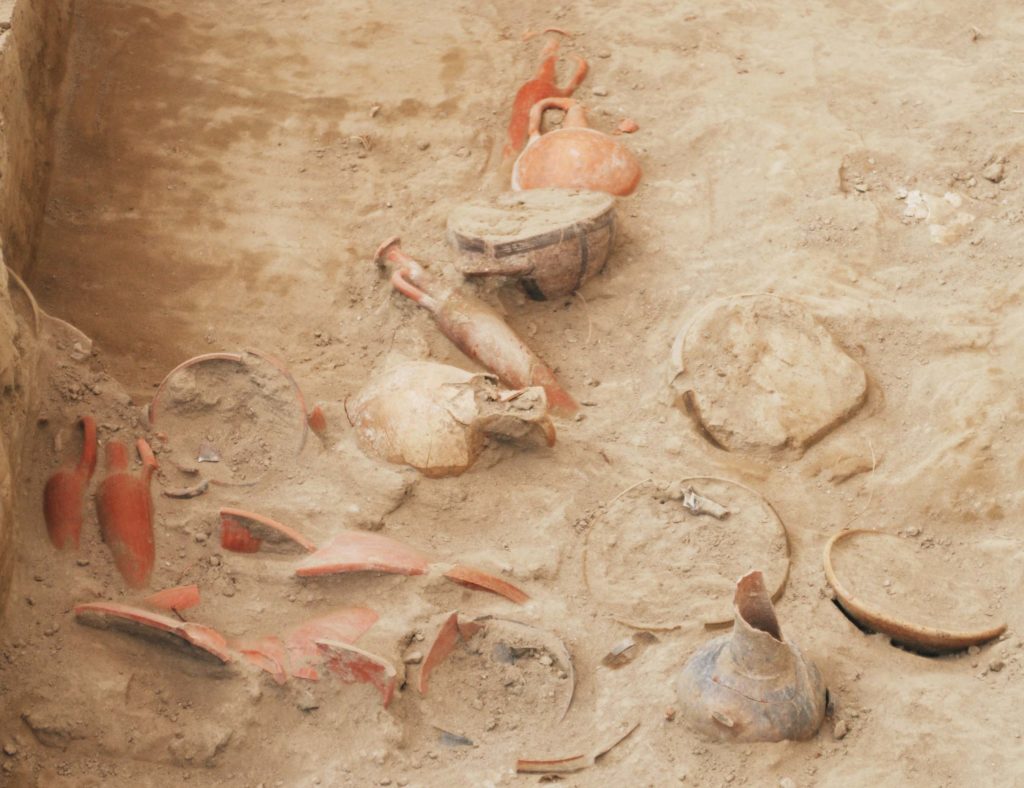 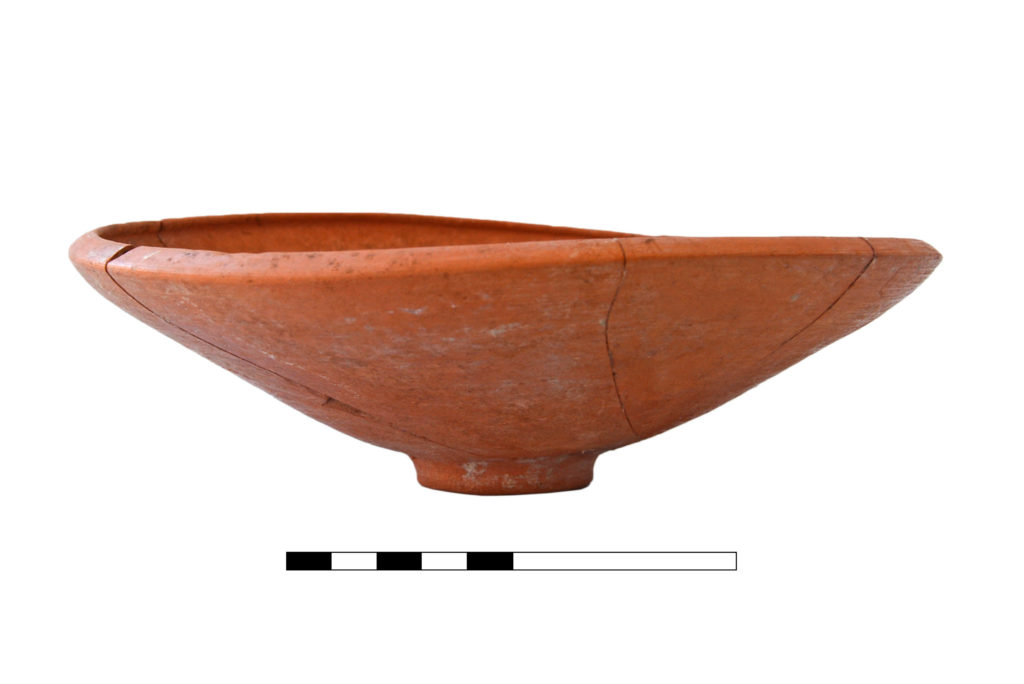 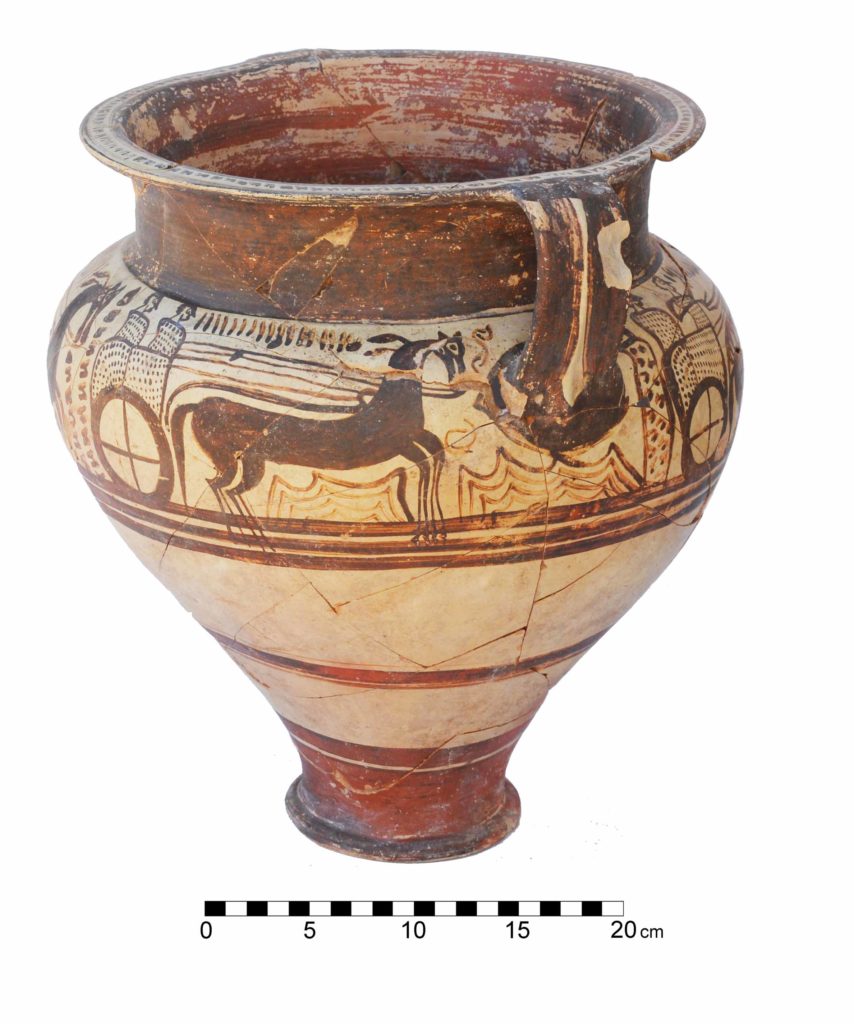 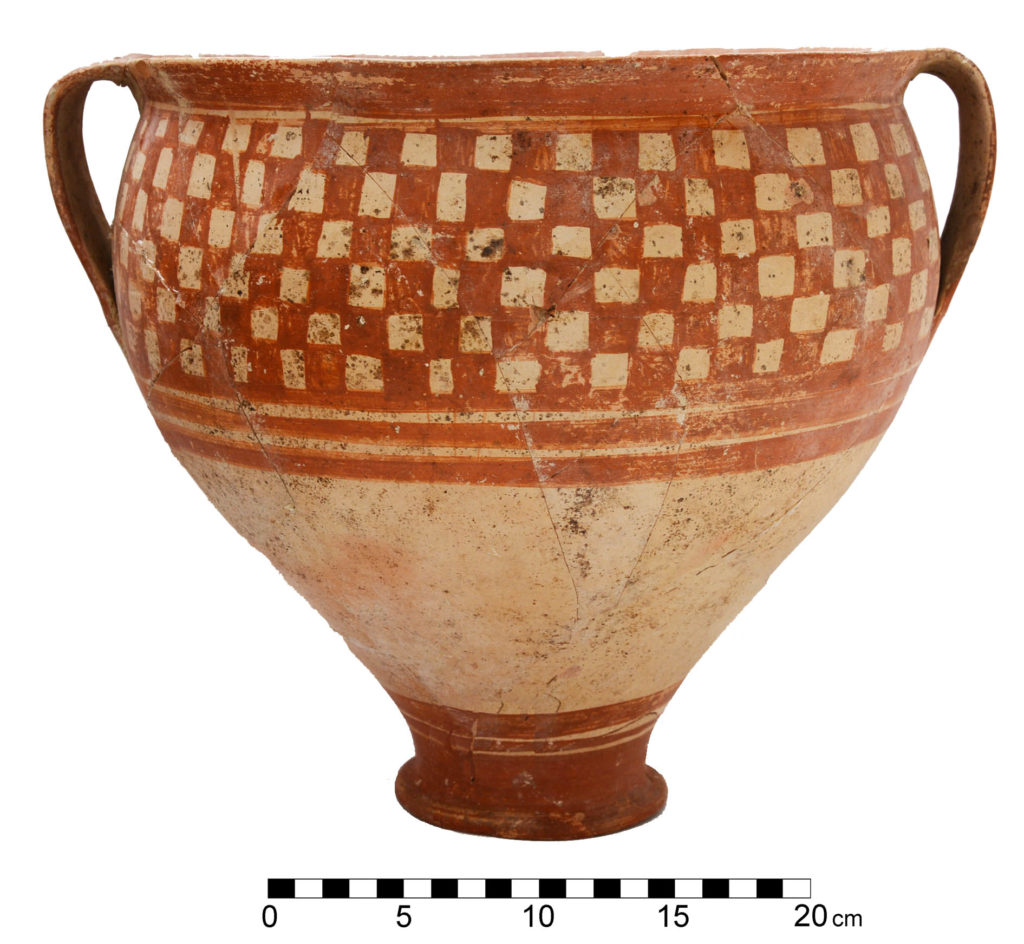 There are close to 400 complete vessels, of which many are intact. Cypriot pottery consists mainly of White Slip II Mature, Base-ring I and II, Plain White, White Shaved and Bucchero. According to a White Slip I bowl, Tomb SS is somewhat older than Tomb RR where this ware is missing. Most imports are from the Mycenaean and Minoan cultural spheres dating mainly to LH/LM IIIA1–2. The Mycenaean imports comprise bowls, cups, jugs, juglets, flasks, feeding bottles, piriform and stirrup jars, alabastra, rhyta and kraters. The vessels are decorated with geometric motifs and pictorial representations of plants, various animals such as fish and birds, as well as sophisticated scenes featuring horse-drawn chariots and warriors. A unique painted cult vessel with circular plastic applications and a ram’s head in relief from Tomb SS was produced in the Mycenaean sphere of culture according to our visual examination of the fabric (restoration in progress). Minoan imports include a set of tableware, a feeding jug, juglets and kraters. Imports from Anatolia are represented by numerous Red Lustrous Wheel-Made vessels including platters, spindle bottles and kraters.
In absolute terms, most of the ceramic finds from Tombs RR and SS should be dated to the 14th century BCE, maybe extending into end of the 15th (Tomb SS) and to the beginning of the 13th (Tomb RR) centuries BCE.

It is obvious from the find contexts that these tombs functioned not only as burial places, but also as spaces for worship, feasting, and commemorating the deceased. The nature of the finds reflects the central role of Hala Sultan Tekke as a trading metropolis in the Mediterranean economic system. The city’s wealth was based on export of copper as a product of intraurban metallurgy, purple fabrics and trade (see previous websites). There are unequivocal cultural and economic connections between the city and a large geographical area: Imports arrived from a region covering Sardinia to Mesopotamia, and from Anatolia to Egypt.

We are much obliged to the personnel of Department of Antiquities of Cyprus and to H.E. Anders Hagelberg, ambassador of Sweden, for all support. Our sincere thanks go the following foundations and academies: The field work was mainly sponsored by the Torsten Söderberg Foundation (Swedish id. ÖT4/18) and the Royal Swedish Academy of History and Antiquities in Stockholm (Enbom foundation). Additional funds came from the Royal Society of Arts and Sciences in Gothenburg. 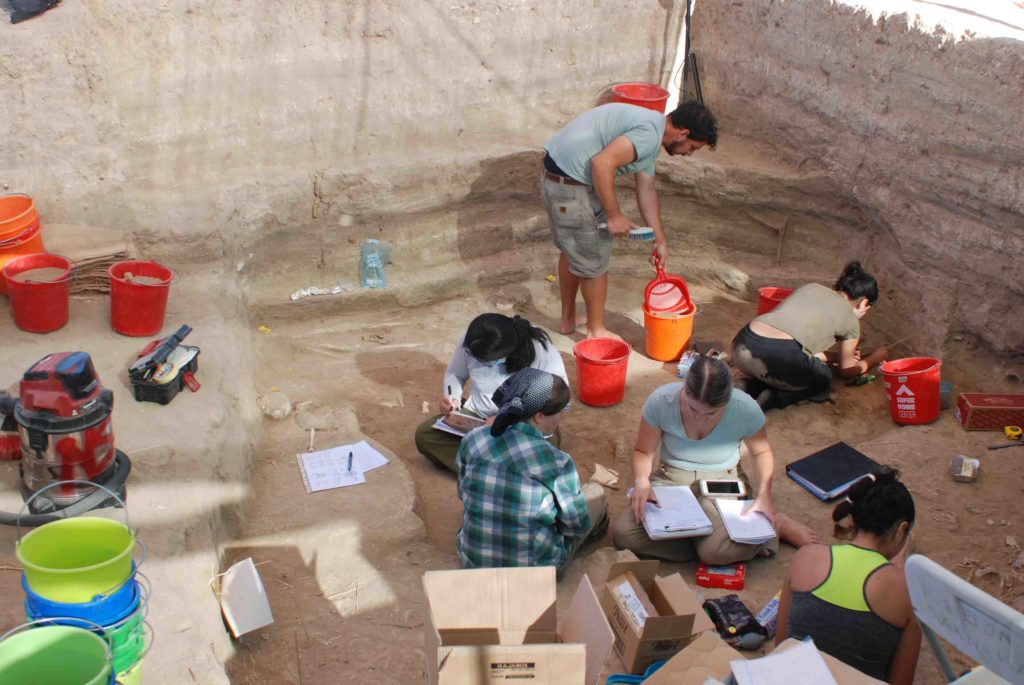