Ten trenches were opened north-west of the area from 1999. Unmistakable traces of earlier (Petrie’s?) excavations were discovered in four of the trenches. The back-filled soil contained in addition to numerous sherds of all periods at Tell el-cAjjul also a cylindrical bead of bronze, a bronze ring with a rounded knob, a spherical dagger pommel of calcite and an Egyptian-style clay bowl.

1. Horizons 1A-B
Seven pits, the largest of which is 4 m in diameter, belong to this layer. There is the only structure in this layer which may represent a looted late Iron Age/Persian tomb.

The pottery is a mixture of vessels mainly from the second part of the Late Bronze Age and late Iron Age shapes. Imports from Cyprus are frequent and consist primarily of White Slip II and Base-ring II together with sherds of Bichrome Wheel-made, Monochrome, Red Lustrous Wheel-made, Base-ring I, White Slip I and White Painted V/VI. Another import is Chocolate-on-White. Sherds of imported carinated jars from upper Egypt and a shallow bowl of Egyptian-type were also discovered.

2. Horizons 2A-B
H2 is the most recent phase with architectural remains although these are quite eroded. A working hypothesis is that we may have found the outer wall of a larger building, parts of which are also exposed in the south, and that the area between these structures was an open courtyard or a road via which other rooms could be reached. 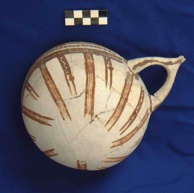 The Cypriote imports from this phase, i.e. White Slip II which dominates, Base-ring I and II, Monochrome, Red Lustrous Wheel-made and White Shaved, fit within Late Cypriote IIA-B (Åström 1972: 700-701). The southern Levantine wares fit well within the second half of the Late Bronze Age I.
The preliminary date of this horizon is LB IB/IIA / LC IIA-B / 18th Dynasty, middle.

3. Horizons 3-4
Structures which were built in the preceding phase H5 were reused for a larger building. New partitions were constructed with supplementary walls. All wallsare orientated north-west/south-east and north-east/south-west. Two layers of destruction were found. Repair work was done after the first conflagration. The building was abandoned after the second conflagration.

This phase again provides the possibility of cross-dating because of the presence of Cypriote and Egyptian/Egyptian-style vessels together with southern Levantine wares. Two vessels are especially interesting because they are complete – the carinated jar from Upper Egypt, or almost complete – the Bichrome Wheel-made Ware jug with the bird/cross/geometric motifs. There is on sherd of Grey Ware from the Upper Euphrates (?).
The preliminary date of this horizon is LB IA-A/B / LC IB / 18th Dynasty, first half.

Import from Upper Egypt from Horizon 3-4

4. Horizons 5A-B
The general plan of the building, parts of which were used in the succeeding phase, was established in this phase. Indicators of two sub-phases are the two floor levels, the two layers of debris of ash and fallen bricks and additional repair/reinforcement. The interpretation of the function of the building has to await the results of the continued excavations.

Cooking pots are usually an excellent chronological indicator. Three types prevail in H5 and were used simultaneously. The following wares from H5 are in agreement with the pottery repertoire, which according to Åström belongs to Late Cypriote IA2: Monochrome, bichrome-decorated White Slip I (early type), Base-ring I (red and black wares), Black Slip Wheel-made, Red Slip Wheel-made, Red-on-Black/Red-on-Red, Bichrome Wheel-made and White Painted V/VI. There are a few sherds of Red Lustrous Wheel-made and White Shaved. Other imports are Black Lustrous Wheel-made and representatives of Chocolate-on-White Ware, namely Chocolate-on-White I/II and Eggshell Ware together with Chocolate-on-White Bichrome, which is very rare at the site. The dating of the Chocolate-on-White Wares, i.e. between the late Middle Bronze Age and the early Late Bronze Age (Fischer 1999: 18), supports the dates provided by the local pottery types and Cypriote imports. The Egyptian jars also support our dating hypothesis. These jars are more frequently found in this phase compared with the later phases and include five piriform jars with incised lines just above the shoulder. The burnished Grey Ware bowl provides a connection with the Upper Euphrates, and Syria and Anatolia (cf. Hauptmann 2000: 148-149). Parallels come, for example, from Lidar Höyük Level 8 (pers. communication Gundula Kaschau, Haindorf 2001). Our bowl corresponds to “Ware J”, which date is the end of the local Middle Bronze Age III (approximately the end of the Middle Bronze Age IIC).
The preliminary date of this horizon is MB/LB / LC IA2/B / Second Intermediate Period, late/18th Dynasty, early.

5. Horizons 6 and 7
The only trench in which the horizons from H6 and down to H8 were almost completely exposed, is Trench 7. It hasbeen suggested above that there are three possibilities as regards the architecture of Trench 7. One is that we have exposed parts of a two-storey building with an upper floor. The second is a building where the roof was used as an upper floor (H6). The third is that we are dealing with two successive periods which are separated from each other only by a short break. We have to await the exposure of a larger area in order to solve the stratigraphical riddle satisfactorily. 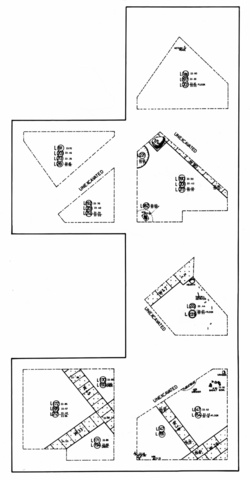 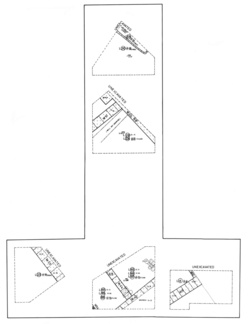 The pottery produced in southern Palestine, in particular the cooking pots, the S-shaped and the carinated bowls and the cylindrical(?) juglet, can very well be classified as representative of the end of the Middle Bronze Age. All Cypriote imports belong to the Late Cypriote IA1 according to Åström’s table if we exclude Red-on-Red which is merely a less common variation of Red-on-Black. White Slip, Base-ring and Red Lustrous Wheel-made Wares have so far not been found in this phase. The shapes of the Egyptian piriform jars fit well within the categories which are dated to the late Second Intermediate Period and continue into the period of the 18th Dynasty (e.g. Bourriau 1997: 180, Fig. 6.19: 9).
The two scarabs are dated to late Middle Bronze Age IIB – early Middle Bronze Age IIC according to C. Mlinar. The scarabs were very likely manufactured at Tell el-cAjjul itself.
The preliminary date if this horizon is MB IIC / LC IA1 / Second Intermediate period, late.

6. Horizon 8
H8 is the oldest phase of occupation in the area, andwas excavated only in Trench 7. The most striking difference between the constructions of the later periods, which are built entirely of sun-dried mudbrick, and that of the walls of H8 is the use of stone as a building material. It is interesting to note that the natural mound in this area is not flat and that the virgin soil levels (“kurkar”) differ by 2.77 m between this trench and the adjoining Trench 12 to the south. The end of this phase is marked by traces of a conflagration. There is one possible Cypriote import. The locally produced pottery and the Egyptian piriform jar fit well into the second part of the Middle Bronze Age. There is one complete juglet which has good parallels at Tell el-Dab’a in Phase E1 and/or E2 (Hyksos period).
Thepreliminary date of this horizon is the second part of the Middle Bronze Age. 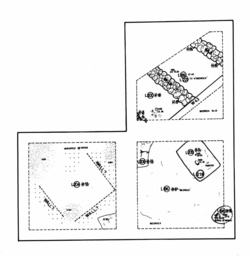 7. Tombs
There are a number of tombs. One tomb, is a simple pit-tomb in the south-eastern corner ofTrench12. It contained the remains of a very young infant, maybe premature or still-born, who was partially buried in a broken storage jar.Associated burial gifts are a complete Bichrome Wheel-made Ware juglet, a scarab and a button. The tomb is according to the associated pottery dated to the beginning of the Late Bronze Age. The scarab N97 from this tomb with the bee and the L-shaped crown is dated by Mlinar to the second half of the 15th Dynasty.
Another tomb in the north-eastern corner of Trench 12, is of a rectangular shape with rounded corners and orientated north-east/south-east. The remains of an infant, between 6 and 9 months old, and two complete vessels, a large one-handled jug with rounded base and a cylindrical juglet, were found. This tomb seems to be somewhat older than the first judging from the pottery. A date at the end of the Middle Bronze Age seems to be feasible.

Cylindrical juglet from tomb in Trench 12